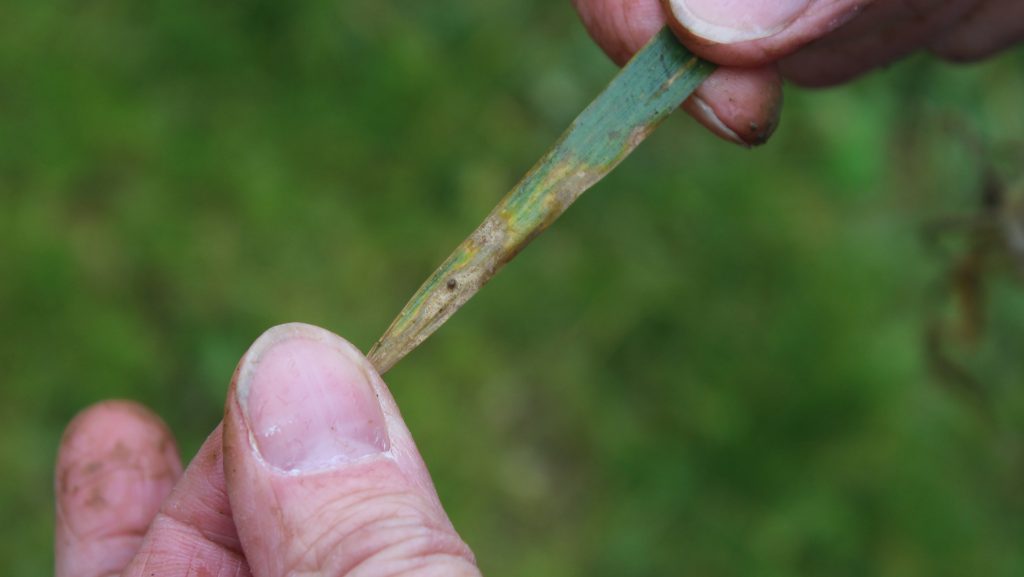 Septoria in wheat on Bedfordshire farm. Taken by Oli Hill

The countdown to T0 fungicide sprays on cereal crops has begun across many southern parts of the country, with applications anticipated within the next 14 days if conditions allow.

In the home counties of Bedfordshire, Buckinghamshire and Hertfordshire, Frontier agronomist Andrew Havergal is reporting high levels of septoria and yellow rust in many wheat varieties.

“Septoria is everywhere in crops around this area but yellow rust is more variety related. Most varieties will have at least some yellow rust this spring.

“I’d say that T0 is still 14 days away but that is very dependent on the weather. If it warms up we’ll need to get on quickly with an application because even though crops will start to grow, disease could really take off.”

Ability to get on with a timely T0 application could be tricky however, as prevailing cold and wet weather makes for far from ideal spraying conditions.

Chris Papworth, farm manager at Crown Farm in Bedfordshire, says parts of some fields are waterlogged with crops looking very unhappy in the colder temperatures.

“We’ve gone from a warm winter where crops were looking pretty thick, to now cold and wet conditions where things aren’t looking at their best, just when they want to start growing away.”

Elsewhere in the country, leaf four is starting to emerge in more forward wheat with T0 timings expected to be slightly earlier than normal.

In Dorset, Agrii agronomist Todd Jex anticipates a T0 spray in the next week to 10 days on this crop of Tower winter barley.

Final leaf 4 just starting to show in KWS Tower in Dorset. T0 a week to ten days away. @KWSUKLtd pic.twitter.com/A53lyqgfSi

Independent agronomists in the Midlands are also reporting wheat now at GS30, with a fungicide spray due very soon.

Keep the Farmers Weekly arable team updated on your crop development throughout the season on Twitter by mentioning @FarmersWeekly or @OliHillFW in your tweets.