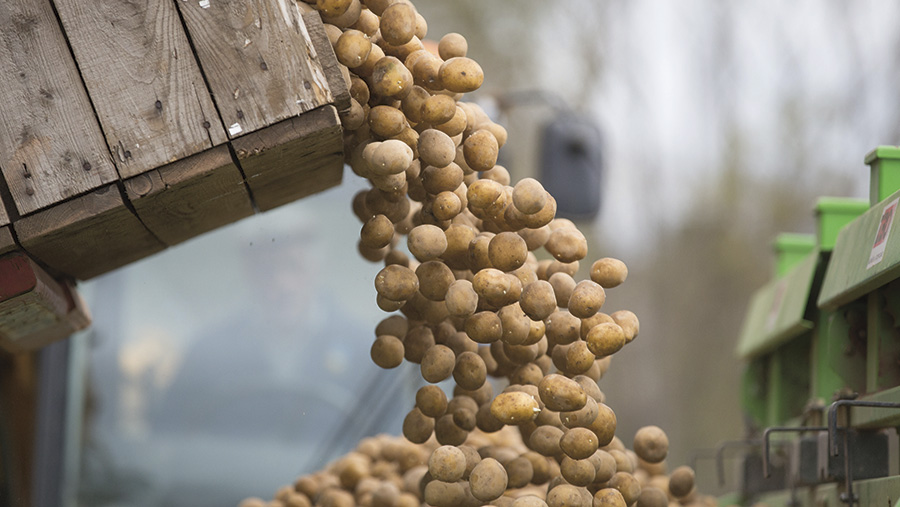 Growing cover crops on overwintered land destined for potatoes in the following improves the workability of soil, thereby increasing work rates at the busy planting period.

That’s according to trials carried out on the AHDB’s demo farm in its strategic Potato Farm Initiative.

Other trials revealed yield benefits of chitting seed of the late-maturing varieties Pentland Dell and Markies prior to planting.

Potato grower James Daw is growing a simple cover crop across his entire potato area this autumn, after seeing the soil benefits in a nutrient trial carried out earlier this year.

The experiment was designed to investigate how inorganic fertiliser rates should be adjusted according to manure application and cover crop use in order to optimise nutrition in the following potato crop.

However, it was a dramatic improvement in soil workability when preparing his land for planting after a cover crop mix of oats and vetch which caught Mr Daw’s eye. 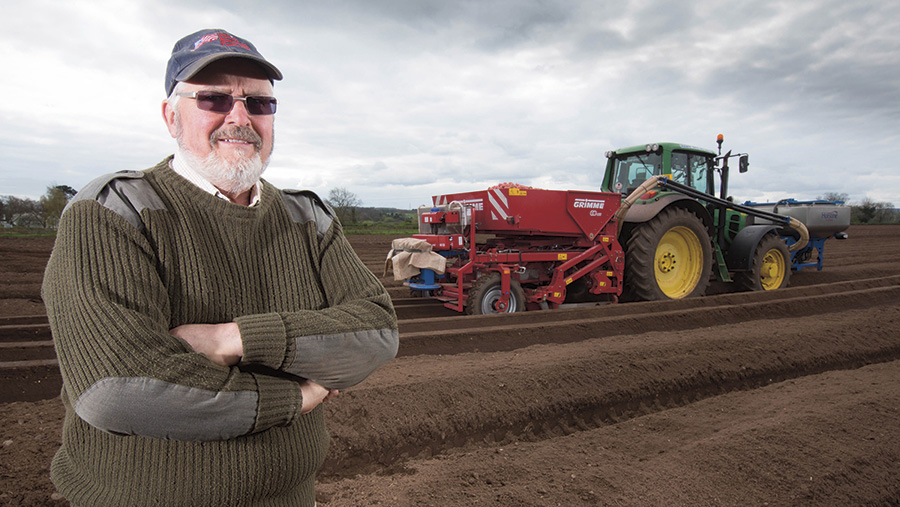 On a sandy silt loam soil, 50kg/ha of oats and 7.5kg/ha of vetch was broadcast onto stubble and incorporated using a Vaderstad Carrier disc harrow.

The cover crop was overwintered and either sprayed off with glyphosate seven weeks ahead of planting, or ploughed in without any herbicide application.

Mr Daw says there was a significant benefit where the cover crop had been allowed to grow on before putting the plough to work.

“There was a big difference in the soil – it just fell apart and the work rates were phenomenal. Looking at where we took it out with glyphosate before any tillage, never again,” he says.

Soil moisture content was measured at 10cm, 20cm and 30cm ahead of ploughing and although it was just 1% drier where the cover was still growing, ploughing speeds were increased by 2kph.

“Cereals will draw water from that zone in the spring and it’s the depth where most soils are plastic and can deform when worked, causing compaction and losing structure.

“If you can get the soil to optimum water content with a cover crop, it will help [the soil] to break up and reduce the risk of any damage,” he explains.

The role of cover crops triggers much debate between potato experts, with biofumigation, organic matter improvement and nutrient capture all touted as potential benefits, depending on species used.

However, there is concern some species may exacerbate disease and pest pressure and high biomass mixes can prove tricky to deal with ahead of potato planting.

Dr Stalham believes growers should keep it simple, identify what they want to achieve and choose a species that will meet that requirement.

“If you are going for soil conditioning, choose the cheapest and easiest way. You don’t need a huge amount of biomass, just 100% leaf cover in the spring is enough, so cereal species are ideal,” he adds.

Mr Daw agrees and will avoid brassica cover crops with oilseed rape in the rotation. Species such as oil radish also go woody and tough over winter and can cause problems during destoning operations, he explains.

“We grow oats anyway, so we can use home-saved seed and including vetch contributes towards meeting EFA [Ecological Focus Area] requirements of the Basic payment Scheme.”

Benefits of chitting seed in the spotlight

Initial results from a physiological aging trial have shown a significant yield benefit from chitting seed in the late-maturing varieties Pentland Dell and Markies.

The physiological age of a seed tuber is effectively the period the sprout is allowed to grow after breaking dormancy prior to planting. 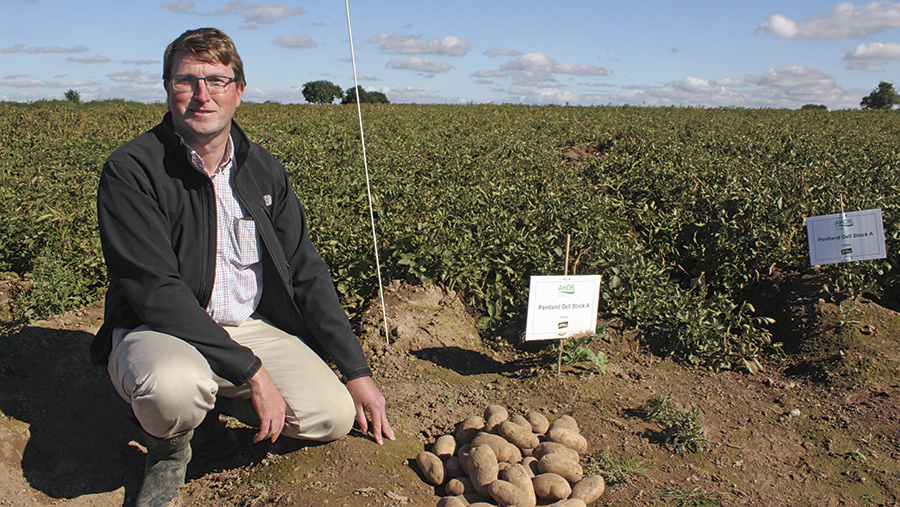 This is measured by accumulated temperature in day degrees above 4C from when sprouts first appear.

Physiological aging is achieved by chitting, a process where seed is stored in trays and encouraged to break dormancy and produce sprouts.

Despite the positives, chitting has become unpopular due to a higher cost and labour burden, so the majority of seed is now delivered just-in-time in bulk bags straight from the cold store.

In the trial, organised by processor McCain, two seed stocks of Pentland Dell and one stock of Markies were either planted straight from cold store or after a chitting period.

Two methods were used for the Pentland Dell, either chitted in traditional trays by a commercial company in Yorkshire or by host farmer James Daw using his own unique system.

The Markies were chitted using Mr Daw’s method only.

During the chitting process, the target was to add 200-250 day degrees to the physiological age of the seed. Trials were planted in late April and yield digs took place on 18 August and 19 September and provisional results are telling (download a PDF showing the yield dig results).

McCain agronomist Matthew Smallwood says there was a seven-10-day advantage in speed of emergence with chitted seed, with plants on average having 15% more canopy up to canopy closure – something that was particularly crucial this season.

“Where they emerged earlier, crops got away well, but later emerging plots got caught in the wet and dull conditions through June.

There were slightly differing results between the Yorkshire-chitted seed and Mr Daw’s own new system, but this can be explained by the differing seed size used by each party.

Both still improved marketable yield significantly and the big advantage of Mr Daw’s system is that it solves some of the logistical issues that have caused chitting to lose its appeal with growers.

Along with his staff and son Sam, he has designed and produced a galvanised steel interlocking tray.

Four of these are stacked together to make a structure similar in size to a potato box, which can then be stacked six high using a forklift, while still maintaining stability.

Once loaded with seed, the latest LED lighting and temperature control is used to physiologically age the seed in the large trays, before being “hardened off” outside in ambient conditions.

Mr Daw says the system achieved fantastic results this season and the biggest difference has been in the field at planting time, with the four trays raised above the planter in a box tipper and each tray end simply sliding out to release seed into the hopper.

“Planter turnaround is now a matter of minutes rather than 15 minutes or so and there is no chucking and tidying up of old trays on the headland, as it is all mechanically handled,” he adds.

The piece is based on a recent open day hosted by James Daws. He is one of three growers (West) across the UK taking part in the AHDB Strategic Potato Farm Initiative, which aims to demonstrate latest best practice advice in an on-farm setting. The other two farms are in Suffolk and Perthshire.