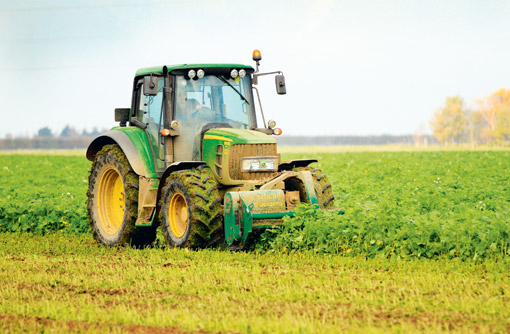 Cover crops can improve soil quality, add nitrogen and reduce weeds, but how can they fit into a conventional rotation? Will Wilson reports from a Controlled Traffic Farming meeting on the topic

On paper, cover crops sound appealing for arable growers: they can help improve soil structure and quality, provide a source of nitrogen, and potentially suppress weeds and pests.

But fitting them into a rotation, deciding which of the myriad options to grow, and measuring the benefits is not quite so straightforward. So is there a place for them on farm?

The direct agronomic benefits are reason enough for growers to at least consider whether to grow a cover crop.

But the political pressure on reducing the impact of pesticides, the knock-on effect on resistance building, particularly to weed killers, and increasing input costs, including fertilisers, could also add to the pressure to introduce them in future.

By using cover crops growers can reduce the pressure on some herbicides, potentially, and reduce fertiliser costs, while also increasing the organic matter content and structure of the soil.

And it is possible to take advantage of these benefits without necessarily affecting yields or requiring a change in rotation.

Most growers should be able to benefit from cover crops in some way, suggests Frederic Thomas, of Conservation Agriculture Brittany, a cover crop enthusiast, who has been trialling their use in France.

“The choice of rotation and cover crops you use depends completely on what you hope to achieve.”

For example, growers on heavy clays susceptible to waterlogging, or light sands at risk from drought, could be particularly interested in the help cover crops can provide in building soil organic matter and enhancing soil structure, while those with spring crops in the rotation, could use cover crops to give a nitrogen boost or suppress weeds in the following spring crop.

Are there any trials results showing benefits?

Preliminary results from the New Farming Systems trials run by NIAB TAG would suggest that using three different covers, a non-legume radish, a legume clover bi-crop and an all species mixture can have a positive effect on yield when used in a conventional rotation.

Yield responses in the 2009 and 2010 wheat and spring oilseed rape crops to the white cover bi-crop averaged 2% across all three N rates, but were strongest where less N was applied, while the radish cover crop averaged 7% yield increase and the all species mixture averaged 9% improvement over current practice. In the latter two cases, yield improvements were less influenced by nitrogen dose.

“All three cover crop approaches led to an improvement in cumulative margin of on average about £80/ha once nitrogen costs are taken into account,” he says. “But it is likely that cover crops would only cover their seed and establishment costs based on these margins.”

However, more benefits could accrue as the system matures, he suggests. “The choice of specific cover crop species, or species mixtures, should help to maximise any potential benefits, while changes to input costs are likely to impact on the returns and additional income from appropriate environmental schemes could improve the attraction and add further financial support.”

Other benefits have also become apparent in the trials, he adds. “For example, we are also finding cover crops keep more moisture in the system. The trials suggest a September-drilled clover crop can double the soil infiltration compared with soil in a conventional regime.”

What about reducing pests and weeds?

The requirement for pest control can also be reduced if, for example, cover crops provide habitats for the predators of common pests. “Winter cover can provide a habitat for generalist predators, while flowering crops can be a haven for predators such as hoverflies,” says Dr Rayns.

In addition, some cover crops, such as hot mustard species, can have nematicidal properties, which could be useful for potato growers.

What type of species should be used?

Depending on what you hope to achieve, there are a range of plants that can be used as cover crops. “We often divide them up into the period of time they are going to be grown,” says Dr Rayns.

Long-term leys can be planted for 12-18 month periods; these are typically used in organic systems before nutrient intensive crops, such as brassicas, he says.

“Often when people think of green manures they think legumes for their nitrogen fixing abilities,” Dr Rayns says. “Red clover is perhaps one of the most commonly known in the UK, particularly in vegetable rotations.”


In most cases it’s a reliable crop, he says, though if over grown it can be susceptible to clover sickness.

“Persian clover is another species that showed quite a lot of promise in trials.” It has rapid growth and fleshy stems that can help to boost short term nitrogen availability.

“Vetch should also be considered as it can be planted both in spring and the autumn and, unlike some legumes, can grow during the winter.”

Longer term clovers could include sweet clover, though he has seen mixed results with it, and white clover and lucerne.

“There’s also a whole range of grasses that can be mixed with clovers to increase organic matter, with ryegrass and cocksfoot the most common,” he says. “Westerwolds ryegrass has also been used as a quick organic matter builder.”

What are the disadvantages of cover crops?

Fitting the cover crop into a rotation is not always easy. In most conventional systems, long-term cover crops are not economic, while delayed harvesting can prevent a cover crop being practical. Not only might the cover crop not be in the ground long enough to bring a benefit, but in wetter situations, any benefits might be outweighed by the damage done by establishing it, notes Dr Rayns.

Cover crops can also conflict with cropping, which requires rigorous cultivations, such as de-stoning, he adds.

Growers might also find that introducing a cover crop requires a time investment. “To get the best from cover crops takes a different and tailored approach to current farming practices,” says Dr Reyns.

Establishment costs vary depending on what you want the cover crop to achieve and what variety you are planting.

There are a number of establishment options available including strip drilling, Auto-casting and even spreading cover crops as part of a liquid slurry system; each system carries its own costs.

Seed costs can range from £30/ha for a simple one variety mix to significantly more for a more advanced multi-variety mix.

Peter Renwick has been experimenting with a diverse mixture of cover crops for two years on his 280ha farm near Chichester, creating seed mixes which he supplies to around 10 growers currently.

“At the moment we grow cover crops before all our spring crops, establishing them from the end of August, and then either grazing or killing them off in the winter, before direct drilling in the spring.”

Getting in quick after harvest is important, he says. “You’ve got to get in behind the combine – two or three days difference can have a significant impact on crop cover.”

The seed mixes include sunflowers, brassicas, millet and vetch and are designed to give multiple benefits. “The rooting profile of each is different, as is the growing profile. For example, the turnips break up the soil while we include the sunflowers to add plenty of organic matter.”

The results have been a more friable soil in the spring, and a 40-50kg/ha savings in nitrogen for one of the growers trying the mix in a following spring oat crop. “In the longer term we hope to see savings in herbicides and pesticide requirements.”

• Have your say on cover crops on our forums