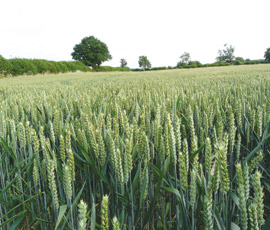 The anticipated late start to harvest could see oilseed rape and wheat being ready at the same time, but one way to spread the workload, and boost incomes at the same time, to sell grain to livestock producers for crimping as cattle feed.

It is looking like one of the latest harvests for oilseed rape and it could conincide with wheat, putting pressure on growers already seeing their oilseed rape drilling window being squeezed.

Therefore, the benefits of cutting grain three to four weeks early are not to be underestimated, says feed processing specialist Kelvin Cave.

“Maximum nutrient yields are achieved from crops that have not lignified and dried out, which involves harvesting grain at 35-40% moisture (about three weeks early). It also spreads the workload, freeing up time to cut mature crops within a weather window, and releasing land early to prepare for following crops.”

Cereals, pulses and maize can all be crimped – a process whereby crops are crushed and treated with a preservative before being ensiled. The preservative ensures a controlled, restricted fermentation, producing a livestock feed with optimum nutrients levels and digestibility.

One grower who regularly crimps winter wheat is grower Martin Lowcock, who has been crimping all his winter wheat at Maltby Grange Farm near Middlesbrorough for the past decade.

He keeps 130 suckler cows on 90ha of permanent pasture, and has a rotation of 40ha of winter wheat, 16ha of spring beans plus red clover and temporary grass leys.

“Making crimped grain means I don’t have to invest in grain storage and drying facilities, and there is a definite yield and gross margin benefit. The early harvest also means I can establish the following crop earlier.”

The wheat is harvested by local contractors Gloag & Sons, who were initially concerned about putting such high moisture crops through the combine. However, those fears proved groundless, and they now start combining at 8am before moving onto mature barley on another customer’s farm later in the day.