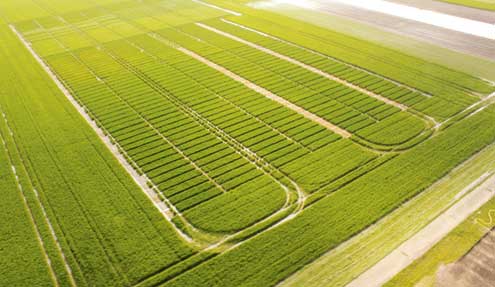 A second Farmers Weekly and Bayer CropScience Crop Doctor helicopter tour – ahead of the crucial flag leaf fungicide timing – has revealed an escalating septoria problem in wheat crops across the UK.

The wettest April since records began has disrupted fungicide programmes and provided septoria with conditions conducive to spread throughout the canopy. Experts warn that it will be the highest disease pressure year since 2008.

Here, we update the disease situations at each of the four sites and our experts give their recommendations for T2. 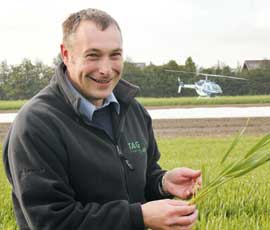 Yield potential at Stockbridge Technology Centre is promising, however, there are high disease levels in the plots, says Sean MacGill, commercial technical manager for Bayer CropScience.

“Many crops in the area have missed a T0 and 75% of T1s are still to do. Usually we have them on by 20 April so programmes are really disjointed.

“Crops are as dirty as I have seen them in May, which is a complete opposite to last year,” says Mr MacGill.

Local AICC agronomist Julian Thirsk is working through his T1 recommendations, with crops only just at GS31-32 on 2 May.

“Yellow rust has gone backwards with lower temperatures through April, but septoria is bubbling away and my fear is warmer temperatures will push both on.

“My T2s will be driven by the flag leaf and not by the calendar, and we will probably see GS39 in three weeks. I will shorten the interval between T1 and T2 if the leaf comes any earlier,” says Mr Thirsk.

The increased pressure this year will be driving Mr Thirsk to recommend an SDHI fungicide at T2. The backbone of the application will be BASF’s Adexar, although he points out there is little difference between Adexar and Aviator.

“Generally, I will stick with the recommended minimum dose of 1.25 litres/ha of the product, however, where disease pressure and yield potential is higher, doses could be increased.

“Price is an issue with increased rate of SDHI, so it could be more economical to top up the triazole in the formulation if a more robust spray is needed,” adds Mr Thirsk.

Disease pressure at and around Callow is again high, with 30-40% of leaf six infected with septoria, and leaf five at 20%. Yellow rust infection has calmed and early brown rust has disappeared since winter.

“Septoria is as high as I’ve seen for four years; the last time we had a really big problem. Recent catchy conditions have provided the rain splash to spread the disease and we will see it starting to express itself shortly,” says Antony Wade, local AICC agronomist.

The SDHI chemistry, and in particular Aviator formulation with its rapid rain fastness, will come into its own this year in what could be a catchy season with high disease pressure, Mr Wade believes.

“In the trials work I have been involved with using Aviator, it is remarkable how the product ‘paints’ itself on to the leaves; you can visibly see the difference to other products.

“It’s really a ‘no brainer’ whether you use the new chemistry this year, particularly with good yield potential and grain prices remaining high. Around 80-90% of my wheats will be treated with an SDHI, predominantly Aviator.

“We have also been doing some adjacent field comparison trials using an SDHI at T1, as they have a cumulative effect in the crop. It will be interesting to see the results from an economic perspective.” 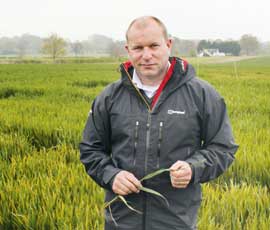 Almost a third of the annual average rainfall for the site had fallen during the month of April, which locally has resulted in some delayed T1s. As some forward crops have partial flag leaf emergence, there is a temptation to spray now and wait a further three to four weeks for a T2.

“This is a very risky strategy, particularly with the septoria pressure we are seeing now,” says Adam Nears, Bayer technical manager at the site.

“I would stick to the growth stages even if it means that the gap between T1 and T2 is just 10-14 days. Historically, all the research shows that delaying T2 compromises disease control on leaf two in particular.

“You may get control on the flag leaf with a delayed T2, but even the best products don’t have the kickback to clean up leaf two,” he adds.

For local agronomist Richard Cromie, well timed T0s and T1s have resulted in good disease control when considering rusts and eyespot, although the recent rain has given eyespot a chance to develop again.

“I’m glad I had Proline or Tracker in at T1 to give us good activity on the eyespot, and where T1s have been delayed the triazole rate will be raised to 75%,” he says.

“It’s all about septoria pressure though, and I am really struggling to find backward crops that aren’t worthy of an SDHI at T2. Last year, we did see increased yield responses when comparing them with a strobilurin/triazole mix.”

Mr Cromie points out that the new chemistry on offer has only been used commercially when disease pressure is low, so this season will be a true test of efficacy.

“Last year we had good timings between T1 and T2, but this year the weather will see some variation in gaps between the two applications.

“I will be using all three SDHI products and I expect to see a greater difference in yield responses, with Aviator and Adexar being more curative and Seguris being more persistent.

“It will be interesting to see if the higher loading of triazole in Aviator or SDHI in Adexar will have the most influence,” says Mr Cromie.

Despite the products being close technically, the tank mix profile of Seguris is a cause for concern for Mr Cromie.

“The consensus is you are more restricted with what you can co-formulate with Seguris, particularly when considering plant growth regulators and late season herbicides such as Topik.” 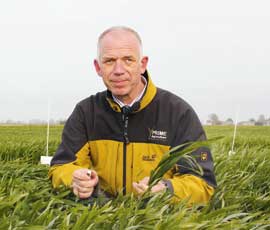 The trial site at Long Sutton was sown in October, which is typically later than commercial crops in the local area, so disease development has subsequently been slower.

Susceptible varieties have active yellow rust coming through, but a well-timed T0 spray has controlled yellow rust adequately, according to Peter Riley of Prime Agriculture.

His main concern is where forward early sown crops had received a T1 earlier than usual. Temperatures have since cooled and crop growth slowed, which may result in flag leaf emergence coinciding with the T1 chemistry running out of steam.

“The risk is enormous, with ideal conditions for septoria since leaf three has been out, and we will see levels higher than for many years. The only saving grace has been the cooler temperatures through April,” says Mr Riley.

“For me, in the crops at risk, T2 should be bought forward regardless of growth stage. I will treat at early GS37 with higher doses than planned.”

Mr Riley again believes there is a place for all three SDHIs and will be using all of them across his area, dependent on disease situation. All are good on septoria, but there are slight differences on rusts, he notes.

“We are seeing brown rust in a lot of crops, and you can see yellow rust bubbling through in places, so we will add a strobilurin into the tank to help the SDHI out where required.

“We are also seeing true eyespot in earlier sown material, which people seem to have forgotten about. It’s a difficult thing to control and in a normal T2 situation research shows that treatment has a limited effect at GS39.

“A higher rate of triazole at T2 could be considered in worst cases, particularly where it’s brought forward to GS37, but it may be too little too late,” Mr Riley says.

• Stick to growth stages even if T1 delayed