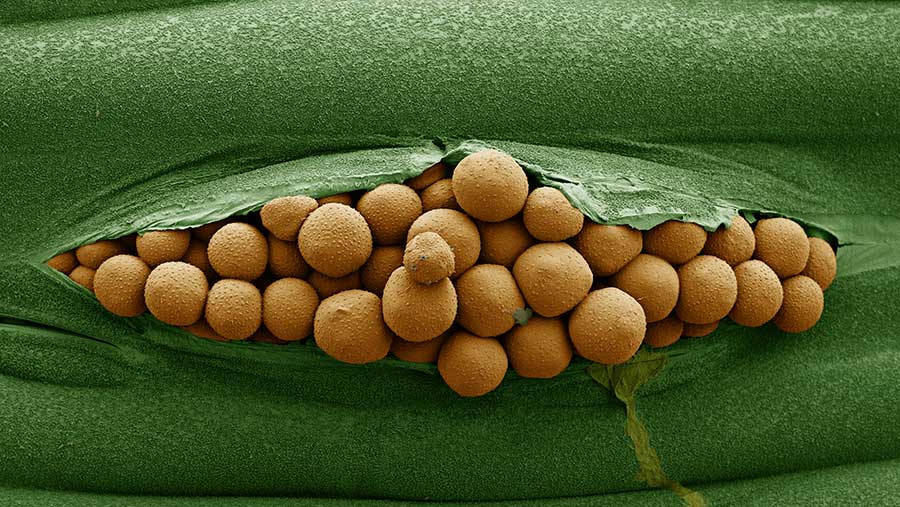 Agrochemicals giant Syngenta is set to launch what it claims is “the best fungicide for cereals” by next spring, giving exceptionally good control of rusts and septoria in wheat.

The new SDHI product Solatenol will enter an already crowded market and compete with products like Adexar, Aviator and Vertisan with claims it offers yield benefits over these rivals when applied at the T2 flag leaf stage in wheat.

See also: Septoria disease in wheat worst for 20 years in the East

The fungicide is expected to win approval before the spring and be marketed in a co-formulation with the popular azole prothioconazole to protect against disease resistance building up.

Gary Mills-Thomas, Syngenta’s UK and Ireland chief, says this “blockbuster” fungicide is already approved in France and awaits final clearance in the UK and Germany.

“The fungicide will give better disease control than the standard in the industry. It will be the best fungicide for cereals,” he tells Farmers Weekly.

The product is said to be the most potent of the SDHIs, distributing quickly across leaves but is slow moving within the leaves to give it good persistency.

“It is at least as good as or even better than Adexar, and it will give growers more choice,” he says.

Jonathan Blake, fungicide expert at fellow consultants Adas, says after his work in Herefordshire since 2013 with the product in 13 trials, he concludes it gives good septoria control compared with other SDHIs and can be used with multi-site chlorothalonil.

“Solatenol is probably the most effective SDHI that I’ve seen on yellow rust, and it has very good activity on septoria,” he says.

“It is better on yellow rust than the competition and better on septoria in certain high disease pressure circumstances,” he says.

The group argues it could help with disease resistance due to its high potency and may be less affected by resistant septoria mutations compared with other SDHIs.

One particular isolate of septoria, named sdhC H152R, has been shown to be less sensitive to SDHIs, but this isolate has only been found rarely so all SDHIs are still expected to give good disease control in the field.

“This is a highly potent SDHI so it performs well and is less affected by sensitivity shifts in the septoria population,” says group product biologist Mike Grimmer.

Jason Tatnell, the company’s fungicide expert, says the slow movement of the product through the leaves makes it “very stable and long-lasting”, and allows the plant to retain green leaf longer leading to a higher yield.

To get registration quickly, the group applied for the product to be used only for one application per season aimed at the T2 flag leaf stage, so the group suggests using its older SDHI-azole product Keystone at the T1 stage.

The new product can be used in wheat, barley, oats, rye and triticale, with the trade name likely to be announced when it is fully approved.

All the speakers were attending a launch briefing for Solatenol which was held Friday 11 November.

The active ingredient is benzovindiflupyr. It is to be mixed with azole prothioconazole for a product set to be available next spring.

Solatenol has been mixed with the strobilurin azoxystrobin and used in Brazil for the last two seasons to control soya bean rust under the trade name Elatus.