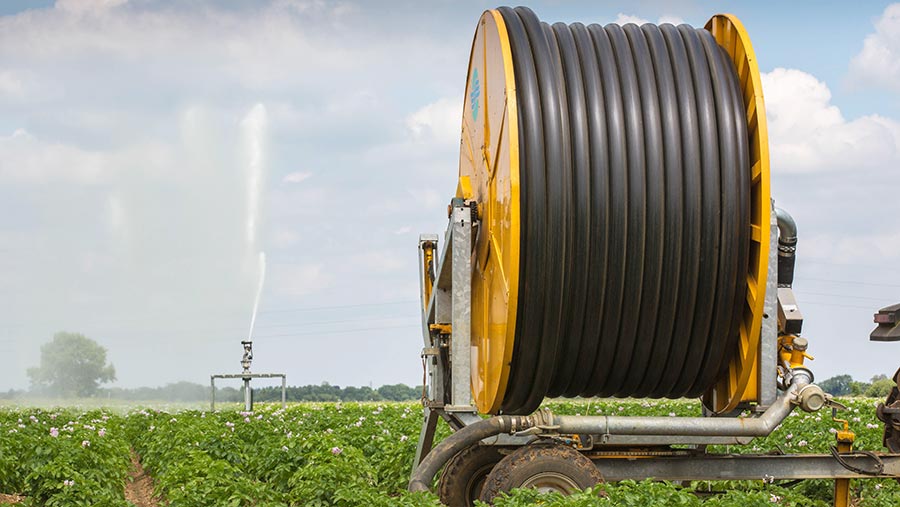 Blackleg is a costly disease in potatoes caused by several pectolytic bacteria that have the ability to infect and break down plant tissue, leading to storage losses and crop rejections.

Symptoms in the field range from mild wilting of plants in the heat of the day to more severe internal necrosis of stems and the distinctive blackening of the stem base that gives the disease its name.

Tuber infection can occur via ingress from the stolon or through tuber lenticels, causing soft rots that break down in store and also spread infection throughout the harvest, handling and storage processes.

AHDB monitoring of blackleg pathogens on England and Wales seed stocks, carried out by Fera between 2013 and 2015, showed that 85%-95% of blackleg or soft rot was caused by Pectobacterium atrosepticum (Pba).

Sasa’s records paint a similar picture in Scotland, with about 95% of blackleg caused by Pba.

The Fera work found three more Pectobacterium species, plus Dickeya dianthicola and Dickeya solani, which are all found sporadically and at low levels.

The dominance of Pba is due to it favouring slightly lower temperatures than other blackleg-causing species, which tend to be more problematic in hotter summers.

Sources of infection include irrigation water, bacterial aerosis, insects, soil, infected seed tubers and weeds. All vary in importance, depending on the environmental conditions each season.

Better irrigation could be critical

Traditionally, a large proportion of the blame for blackleg infection has been placed with contaminated seed, but a recent research project, led by Ian Toth of the James Hutton Institute, has suggested irrigation may play an important role.

Prof Toth and his team took a disease-free pre-basic seed stock and planted it into plots, with half irrigated with bore-hole water and the other unirrigated.

Interestingly, post-harvest testing revealed that the unirrigated tubers had zero blackleg contamination, while the irrigated ones had 7% infection – unheard of for a pre-basic crop.

Prof Toth says this shows that seed tubers do not necessarily need to be contaminated in order for a crop to display blackleg symptoms, with potential contamination coming from irrigation water or wetter conditions allowing bacteria to thrive more readily in the soil.

While irrigation on Scottish seed potato crops is rare, it does hint that over-irrigation of ware crops may be causing or exacerbating blackleg infection seen by ware producers further south.

This suggests that improved irrigation management could be a critical aspect of an integrated approach to blackleg control for ware producers.

“This is not to take away from the importance of contaminated seed, but there might be another reason for seeing blackleg [in your crops],” Mr Toth says.

Mixed species populations of FLN are present in all soil and different species interact with plants in various way, with some feeding on roots by sucking, others chewing and some by sticking their stylet straight into the xylem to access the water supply within the plant.

It is known that some FLNs – namely stubby root nematodes – can transmit tobacco rattle virus and it has long been suspected by agronomists that FLN could have a role to play in the spread of Pectobacterium.

Prof Toth and his team – with funding from the Scottish Society for Crop Research (SSCR) – set up an experiment looking for an effect and found that in the presence of FLN, Pectobacterium loading within potato plants was up to 10 times more than without. 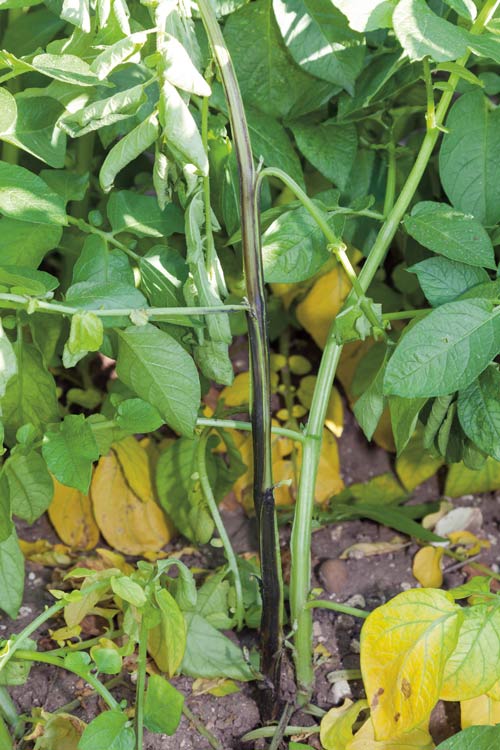 Clear signs of blackleg on a potato stem © Blackthorn Arable

It is though that this will almost certainly lead to an increase in blackleg symptoms in the field.

Typically, FLN will be present quite low in the soil profile, but when ground water rises it can bring them into contact with plant roots, so over irrigation could be linked with increased transmission of bacteria in the plants.

It is hoped that a decision support tool based on irrigation and diagnostics of FLN present in the soil might delivered to indicate risk of blackleg spread within a crop.

This might also help guide storage and handling decisions to prevent the disease causing problems further down the production line.

For Agrovista agronomist Andy Steven, who advises on a significant area of seed crops across Scotland, closer collaboration at all points of the seed production system is key to the continued reduction in blackleg incidence, which peaked in 2012 and has been falling since.

There are clear differences between potato varieties in terms of susceptibility to infection, so having better information from breeders at an early stage – which is currently lacking – would allow high-grade pre-basic seed producers to avoid weaker varieties.

In addition, Mr Steven has a seed grower group that was concerned about the level of blackleg in their crops and started working together two years ago to try to reduce it.

This involved auditing each other’s production, harvest, handling and storage systems, assigning a score to each area to identify weaknesses, and discussing solutions that would reduce blackleg risk ahead of last season.

Sasa’s MySPUDS seed inspection system has data on every individual crop in Scotland and this was used to benchmark progress after the first year of implementing change.

It was found that while the rest of the industry had stood still in terms of blackleg incidence, the group had improved in 80% of cases when comparing like-for-like.

Some of the measures included doubling the width of unplanted beds on sprayer tramlines to reduce physical Pba transmission, speeding up drying times in store and disinfecting grading lines with Jet-5 (peroxyacetic acid) between different seed lots.

Mr Steven also highlights the importance of finding viable alternatives to diquat for rapid burndown of seed crops, with its non-renewal potentially hindering the fight against blackleg.

Some basic seed production principles are not up to scratch in parts of the seed potato production and supply chain, and raising standards will help reduce the incidence of blackleg, according to Norfolk producer Tony Bambridge.

He grows 170ha of seed and 140ha of ware potatoes near Aylsham and says that although the field environment is key to disease levels, managing the conditions in which seed tubers are handled and stored from harvest to ware-growing customers is vital.

He believes seed growers should be paid not for the tonnage of crops, but by tuber numbers, which would encourage the industry to leave crops in the ground for a shorter period, exposing tubers to less blackleg contamination risk.

Other lower value crops, such as barley, should also take less of a priority at harvest when seed could be being lifted in ideal conditions, rather than those that favour blackleg.

“We are hopefully desiccating in July and lifting in August and as we are lifting in warmer, drier conditions. There is then a better chance of getting that crop out undamaged and in an environment which is quite hostile to the [Pba] pathogen,” he explains.

Storage is another key factor, with many stores having inadequate ventilation and refrigeration in order to dry and cool the seed crop as quickly as possible, without condensation events which can exacerbate soft rots.

It has been shown that the dominant Pba can continue to grow down to 3C – the target temperature for stored seed – so subsequent temperature control after rapid cooling and drying is crucial in reducing spread in store.

“I don’t think any of that is really what you would call ‘standard practice’ within our industry. It is not happening quite as far as I think it should be,” adds Mr Bambridge.