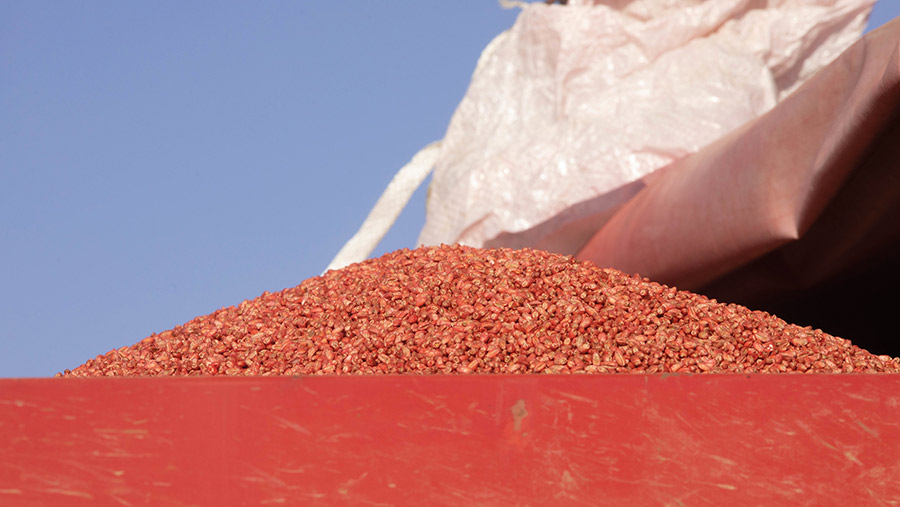 Cereal growers are increasingly questioning the need for chemical seed treatments as they continue to improve soil health, encourage soil biology and drive down costs.

With autumn drilling under way, the routine practice of applying a seed treatment to reduce inoculum levels and disease development from seed-borne diseases is under scrutiny – especially where seed has been tested and found to be clean.

Other growers are unwilling to put soil biology at risk by adding a fungicide-based treatment to the soil, seeing it as a backwards step for the symbiotic fungal/plant relationships they are working to create.

As Ben Taylor-Davies of consulting company Regenben explains, the use of single-purpose seed dressings does give peace of mind, but may be doing more harm than good where regenerative agriculture systems are being used.

“If you’ve been building soil biology and seeing positive results from more resilient soils, there’s good reason not to use a chemical treatment,” he says. “Fungicides are active against fungi, after all.”

However, growers who are still max-tilling their soils and don’t have the necessary soil biology are likely to find their crops are more at risk from disease, he warns.

“These are the instances where they may need a seed treatment. Having your seed tested will tell you if one is required.”

For those dropping chemical seed treatments and replacing them with bio-alternatives, there is a huge range to choose from – but not all of which have proved themselves in UK conditions.

Various biological seed treatment products are on the market, acknowledges Mr Taylor-Davies, but growers should be cautious about adding bacteria to the seed without understanding what they will do or whether an imbalance will occur.

“It takes time to build soil biology and there are very few short cuts.”

Brewed composts are different, as they work as a biological amendment and are a complete package, rather than just containing certain strains of bacteria, he notes.

The use of endophytes in seed treatments is new to the market this autumn, following the launch of Unium Biosciences’s Tiros.

Endophytes are naturally occurring organisms, often fungi and bacteria, that live within a plant for at least part of its life cycle, forming a relationship with it and helping to increase nutrient use efficiency.

In the new product Tiros, there are two strains of endophytes – one that helps the crop fix atmospheric nitrogen and another that sequesters phosphorous, potassium and zinc, maintaining the plant’s nutritional balance and keeping it healthy, claims the company.

“These endophytes colonise the plant and form associations with it,” explains John Haywood of Unium. “They are applied in the seed plant or by a mobile seed unit and can be used either with a single-purpose dressing or on their own.”

The endophytes are freeze dried and delivered in sachets, which have a three- to four-year shelf life. Once mixed as a liquid for application, this shelf life drops to six to seven months, which allows drilling date flexibility.

Tiros costs £60/t, which roughly works out as £6-£7/ha on-farm, depending on seed rate. It is available from seed merchants and mobile operators throughout the UK, following a pilot test last autumn and a small amount of spring 2020 usage.

The company points to three years of independent, replicated UK data on its use, involving 30 trials, which showed an average yield increase of 5%.

“Work done at the University of Washington identified the endophytes capable of making nitrogen and phosphorous available to the plant, encouraging healthy growth and the ability to withstand stresses,” adds Dr Haywood.

This research work was then commercialised, so that endophytic relationships could be exploited to reduce nitrogen use and manage nutrients more efficiently, across a range of crops.

Foliar products will be the next development, believes Dr Haywood. “There will eventually be five products introduced. We have some very promising trials to date on potatoes, for example.”

Trios is also approved for use in organic systems and has just received approval for use in grassland.

Hertfordshire farmer Andrew Bott has been putting soil health first for the past 10 years, having moved to no-till and cover crops in 2010.

Following improvements in both soil and crop health, he then took the step of eliminating all seed treatment and insecticide use across the 530ha he farms near Stevenage – to keep making progress. 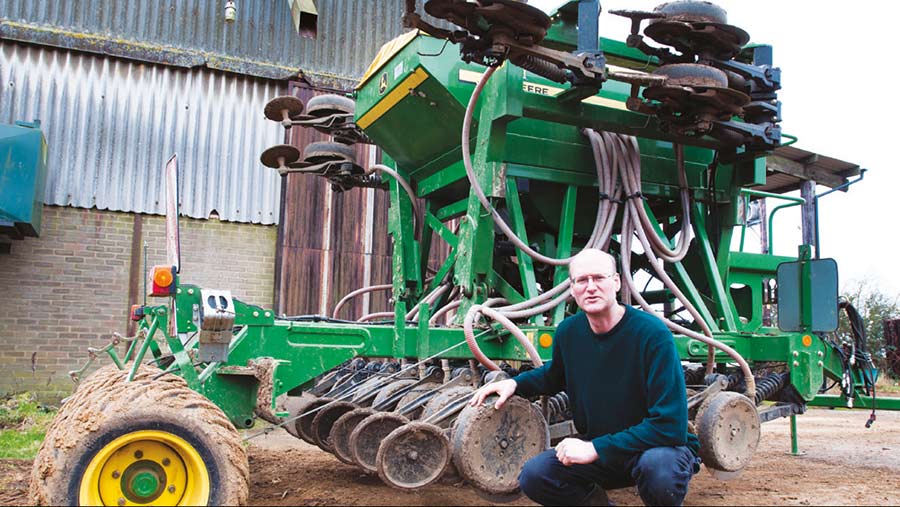 Mr Bott gave an update on his farming system at the recent Groundswell-organised webinar on catchment-sensitive farming techniques, explaining how he has been working to restore the chalk stream that should flow through the farm.

His view is that putting fungicide around the seed at drilling and then expecting mycorrhizal fungi to come and talk to it doesn’t make sense.

“In this type of system, I am relying on soil biology and the interactions between plants and fungi,” he says. “So I want to do as little as possible to disturb that balance. The idea is to let biology do what it does naturally.”

Seed testing can always be used if there is any reason to be concerned about a batch of seed, he points out. “We’re on chalk, so we do put some magnesium with the seed, and in the spring a bit of phosphate goes down the spout.

“But putting fungicide and insecticide on the seed is madness.”

Soil resilience has really improved over time, he reports, and he is now on a mission to reduce the effect of spring droughts.

“Better infiltration and water-holding capacity are the aims – I need the soil to soak up the rain and hold it in over the whole growing season. That way the river will get a more constant supply of water and we’ll get the chalk stream back.”