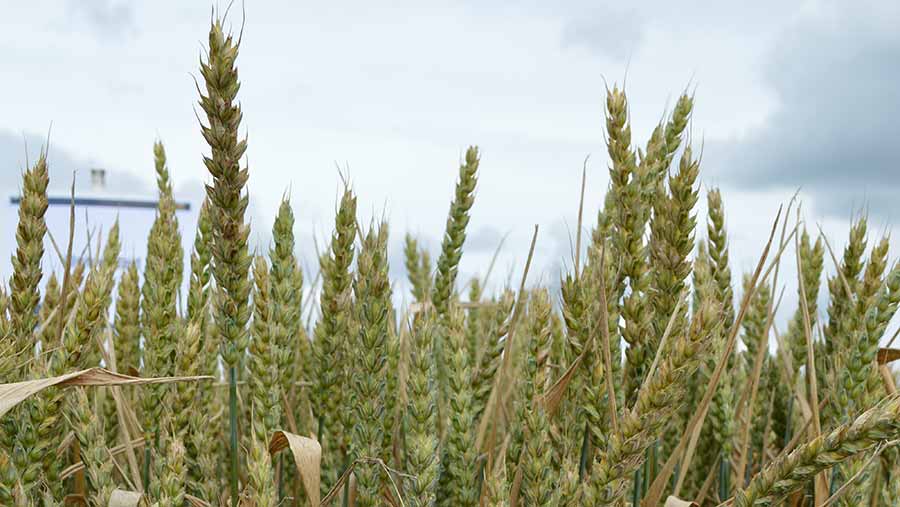 The company claims it shows the best available control of septoria, leading to a yield boost over rivals.

This yield gain translates into a £40/ha advantage at current wheat prices. The fungicide is fully approved and ready for use next spring on wheat aimed at the key T2 flag leaf stage in May to control key diseases such as septoria, rusts, mildew and fusarium.

Will Charlton, Bayer’s campaign manager for cereal fungicides, explains Ascra is the first wheat fungicide with two SDHIs and is mixed with the top-performing azole prothioconazole to guard against disease resistance building up.

“It gives the best and most curative septoria control available, offering 6% better control on the top two wheat leaves than Adexar,” he told a recent briefing.

The improved performance comes from the second SDHI, fluopyram – used in the group’s oilseed rape fungicide Propulse – which distributes quickly through the leaves. The other SDHI, bixafen, and azole prothioconazole give long-lasting action.

The new product will enter a very competitive market, with Syngenta looking to launch its new SDHI solatenol-based fungicide next year alongside other SDHI-based established products such as Adexar, Aviator, Librax, Vertisan and Keystone.

Four growers have already given Ascra the thumbs up, with South Oxfordshire farm manager Simon Beddows seeing pleasing results using the product as he saw a 0.4t/ha wheat yield increase over his farm standard, worth about £60/ha.

In the same county, James Price saw another good result with the fungicide as it showed a 0.3t/ha yield benefit. He said he will definitely be using the product again.

In south Lincolnshire, David Hoyles saw a yield gain of 0.37t/ha over a plot grown for the Adas-organised Yen Enhancement Network, which had extra nutrition. In the same county, Andrew Ward was pleased with the product and will be using it again.

These four were part of 42 growers asked to compare their standard T2 fungicide with the new fungicide in 2016, with 70% of them showing improved yields.

Ascra is to be priced at a premium to Bayer’s existing Aviator, is fully cleared for use next spring and will be aimed at the T2 timing, with Bayer advising using Aviator at T1.

The new product performed particularly well in high-disease situations, while even with low disease pressure it exhibited physiological benefits to give greener leaves, bigger roots and hardier plants and so boost yields, she added.

Laboratory tests show the two SDHIs could potentially control different strains of septoria, but as both SDHIs have the same mode of action, using two is not seen as a resistance management tool.

The key to managing resistance is to use an 80% dose of prothioconazole, which, according to Bayer, is the most active azole fungicide against septoria. A multisite fungicide such as chlorothalonil can also be used with Ascra.

Wheat breeder Bill Angus says disease resistance genetics are not powerful enough to preclude the use of fungicides in the UK. He believes the UK has the best climate in the world for growing wheat, but also for disease development.

“Septoria is really a very frightening disease and is the silent yield killer. Lack of yellow rust control is embarrassing, but does not kill yields like septoria,” he says.

Even low levels of septoria can hit yields by more than 1t/ha, and it is a high-risk strategy to cut fungicide use in efforts to reduce costs, Mr Angus adds.