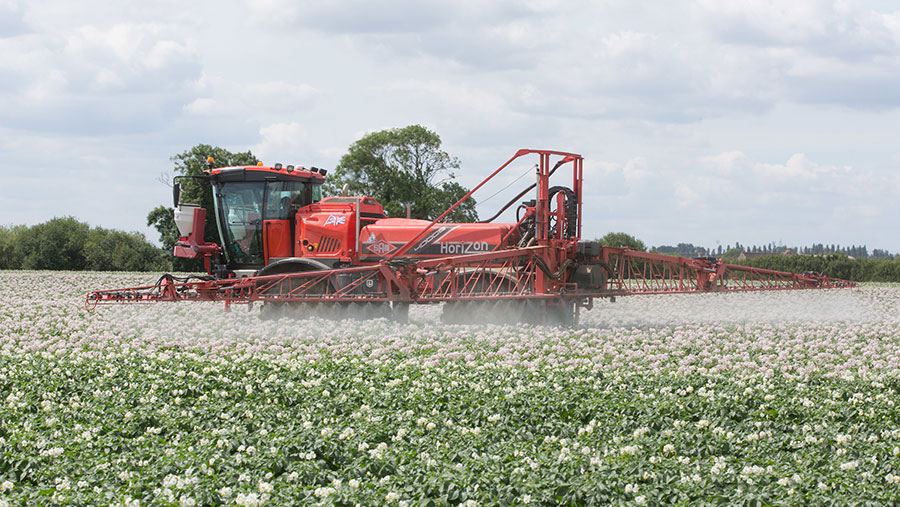 The laboratory discovery prompted a warning against complacency when formulating future blight control strategies to help prevent the loss of other fungicides.

The AHDB commissioned work to test a range of fungicide groups active against potato disease phytophthora infestans, and was carried out by researcher Alison Lees at Dundee’s James Hutton Institute during late 2018.

Detached potato leaves from the Maris Piper variety were treated with five common fungicides, with different modes of action and at a range of concentrations, including fluopicolide, mandipropamid, propamocarb, cyazofamid and fluazinam.

To simulate a preventative approach, the leaf parts were inoculated 24-hours later with four late blight strains present in Britain – 13_A2 and 6_A1, plus the more recently-discovered 36_A2 and 37_A2. The development of lesions was then observed and recorded.

Both 13_A2 and 6_A1 were well controlled when treated with the active ingredients at all but the very lowest concentrations and, unsurprisingly, the experiment confirmed fluazinam resistance in 37_A2.

Perhaps the most interesting observation, however, is leaves inoculated with 36_A2 developed larger lesions than any other strain after treatment with all the active ingredients tested at low concentrations, with the exception of fluazinam.

The institute’s blight expert David Cooke, who was presenting Dr Lees’ work at the recent AHDB agronomists’ conference in Kettering, stressed this does not mean there has been a shift in sensitivity to the fungicides used in the experiment due to the very low doses used.

However, when combined with previous work on aggressiveness of blight strains, which showed 36_A2 produces among the biggest-sized lesions and produces high numbers of sporangia in each lesion, this means it is “one to watch” in the field.

“We are not recommending any changes to best practice, so following the Fungicide Resistance Action Committee [Frac] guidelines is the key message.

“We do, however, need to keep considering this 36_A2 genotype in particular. It is clearly more aggressive and can cause problems… and it will be interesting to see how this develops in [the field] during 2019,” he added.

Scottish Agronomy’s Eric Anderson told Farmers Weekly while the results should not cause alarm, it is a warning the potential for the development of fungicide sensitivity shifts in late blight should be taken more seriously than in the past.

He said traditionally, it has been regarded as a “safer” pathogen that is less likely to mutate, but lab experiments, resistance to phenylamides (metalaxyl) in 13_A2 and more recently, fluazinam in 37_A2 populations show a clear and present danger.

With 36_A2 dominating blight populations in the Netherlands and already gaining a foothold in eastern England, growers can’t be complacent in managing the aggressive genotype.

“Without more data, we cannot confirm or refute any fungicide sensitivity shift to 36_A2 at this stage,” said Mr Anderson.

“But we’ve got 13 modes of action for late blight control, whereas we have just three in cereals against septoria, where disease control is becoming very uncomfortable.

“If we can learn any lessons from that, let’s not travel down the same path and be proactive by putting in place sensible late blight management strategies that will help maintain all the tools in the toolbox for as long as we can,” said Mr Anderson.

Resistance can develop rapidly in a single step – like fluazinam – or more gradually over time and is less easy to detect and represents a significant threat to fungicide efficacy and sustainable blight control.

Combined with fewer new fungicide molecules and potential losses of existing chemistry means risk of resistance will increase and, Mr Anderson says, a change in mindset and habits of growers, distributors and agrochemical manufacturers will be needed.

One practice common within the potato industry – particularly in the Netherlands – is the “blocking” of blight programmes, where the same single-site active ingredient is used alone for up to three consecutive spray applications.

This increases selection pressure and risk of the less-sensitive isolates coming to the fore and Scottish Agronomy’s Greg Dawson said avoiding over-reliance on single-site modes of action – which are medium to high risk for resistance – is crucial.

He said growers should understand the different Frac fungicide groups active on late blight and ensure single-site fungicides are never applied consecutively or without stacking a multisite mixing partner, such as mancozeb.

With the limited evidence suggesting 36_A2 is able to remain active in the presence of very low levels of fungicide, it is important to maintain field rates.

Another consideration is appropriate product choice during the rapid crop canopy phase, as CAA fungicides (for example, mandipropamid) commonly used at this time are not truly systemic and work by being active at low concentrations in the leaf wax of growing leaves.

“Spray intervals should be kept tight and at no more than seven days, particularly during rapid canopy development or when large canopies may compromise coverage on lower leaves,” added Mr Dawson.