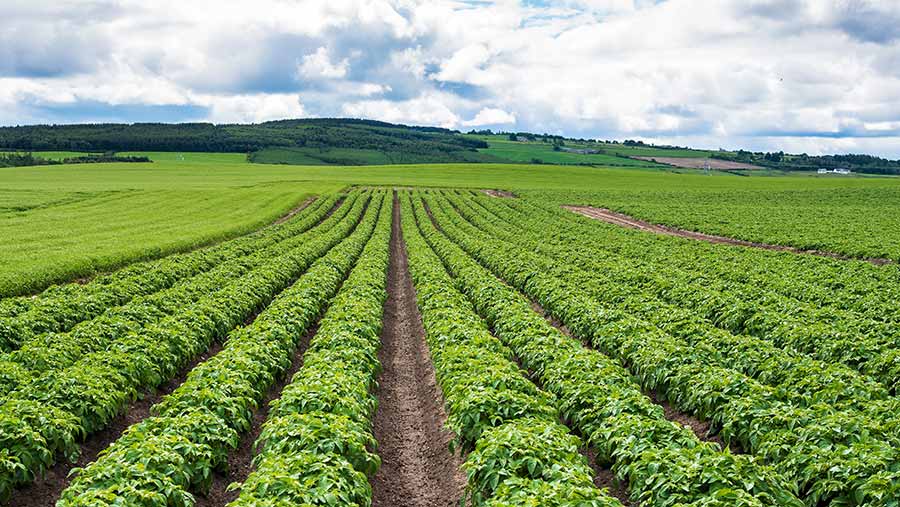 Growers in Scotland are being urged to monitor water usage as irrigation supplies come under pressure from a prolonged dry spell.

Some regions are experiencing significant water scarcity and the Scottish Environment Protection Agency (Sepa) has issued an early warning on supply for the whole of the country apart from Loch Linnhe and Lochy.

See also: Find all our irrigation advice in one place

It follows an extremely dry spring, with less than a third of the usual rain falling across a large part of the south of the country in April. This caused water levels to rapidly fall and ground conditions to become increasingly dry.

Thereafter, Scotland had just 45% of its normal rainfall in June and the average temperature was 1.4C warmer than usual.

And while there was some locally intense rain at the beginning of July, it was not enough to bring a sustained improvement, says Sepa.

It wants abstractors to take action now to protect water resources, while growers are being warned not to over-spray and to check that irrigation equipment is not leaking.

Sepa also advises them to consider trickle irrigation and to water at night to avoid evaporation.

He does not irrigate, but said dry conditions had affected tuber numbers in his crop, which would reduce yield. But the dry weather had boosted potato quality.

“In the north-east we are very dry,” he said. “We’ve had around 20mm in July, but there is rain forecast this week. Nature seems to have a way of sorting itself out.”

But Sepa’s latest Water Scarcity Situation Report shows that the majority of the country is affected, with significant scarcity in Helmsdale and Naver, moderate scarcity in Wick, Cree, Doon, Ayr and Irvine, and alerts in Findhorn, Ythan, Clyde and Arran.

The longer-term forecast also suggests that there is an increased likelihood of hot, dry weather for the rest of the summer.