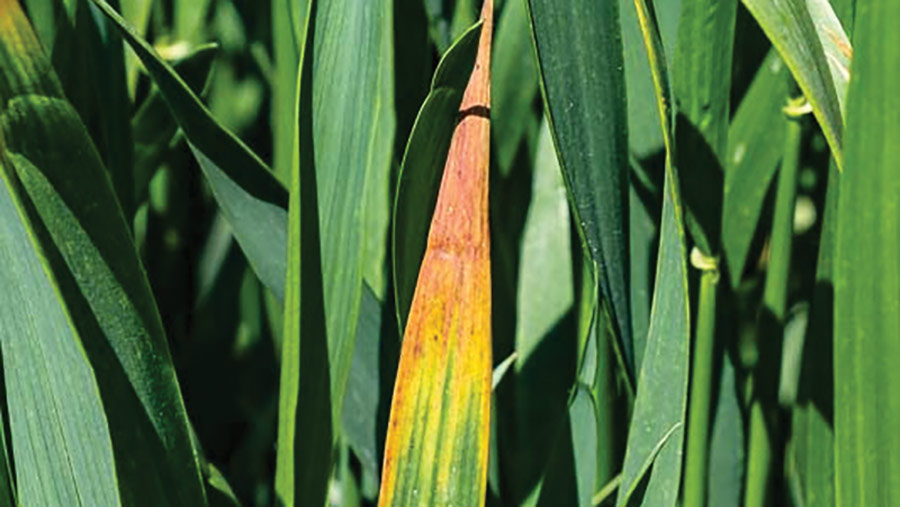 Barley yellow dwarf virus (BYDV) is an aphid transmitted disease which can severely reduce the yield of cereals and grasses, with severe cases losing up to 60% of yield.

With the loss of neonicotinoid seed treatments for aphid control and increasing resistance to pyrethroids, growers should consider deploying an integrated pest management (IPM) strategy to tackle the virus.

If left untreated, 82% of wheat crops could be affected by BYDV annually, costing the industry £136m/year, with barley crop losses being more significant. This makes IPM vital for disease control.

Mr Fogg’s first tip to reduce BYDV risk, is to use one of the latest advances in the fight against the disease – drilling a tolerant or resistant variety.

For barley growers, genetic tolerance is available from the conventional 6-row variety Amistar, which contains a BYDV tolerance gene.

The gene means plants can still become infected, but crops will not display disease symptoms and instead grow normally with minimal yield loss, despite the virus being present.

Varieties like these still perform well in their own right, before factoring in genetic tolerance to disease, which means in years of low BYDV pressure, yield is not penalised.

Mr Fogg also advises growers to prevent transmission by removing volunteer cereals and weed grasses, as these act as an infection source known as the “green bridge.”

Early emerging autumn sown cereals offer favourable conditions for aphids, with crops at a particularly high risk of disease infection during years of mild weather during autumn and winter.

“Early drilling can add to this risk due to a shorter window from harvest to drilling,”

He warns that on the back of autumn 2019, growers are likely to drill earlier, increasing the risk of early infection and potential impact on the crop, so where possible delayed drilling should be considered.

Crops should be monitored closely and aphid monitoring reports can be used to track initial pest migration.

“Yield losses on untreated wheat crops average 8% and, in some cases, as high as 60%,” he says.

The earliest disease symptoms are a slight discolouration of the youngest leaves. Later in the season plants are stunted with extensive tillering and show patches of yellow. However, once symptoms appear it is too late for control measures, which is why monitoring aphid flight is key.

Mr Fogg highlights that a range of support tools are available to predict when second-generation offspring may appear, such as the AHDB cereal management tool.

As a last resort to prevent the second-generation infection risk a pyrethroid insecticide spray can be used, at or just before peak infection time, which usually occurs in October. This allows for a reset to monitor for further risk later in the season.

Paul Fogg says it takes 16-24 hours for aphids to pick up the virus, and four to eight hours to transmit to uninfected plants.

Mr Fogg notes that only a small proportion of aphids entering cereals are likely to be carrying BYDV.

It takes weeks for the first generation of wingless aphids to mature and start to reproduce, but where problems with BYDV spread arise is when the second-generation offspring of the original winged colonisers are produced.

Temperature governs the aphids’ reproduction speed and growth, with second generation aphids likely to be present when accumulated daily air temperature is above 3C, and reaches a T-Sum of 170.