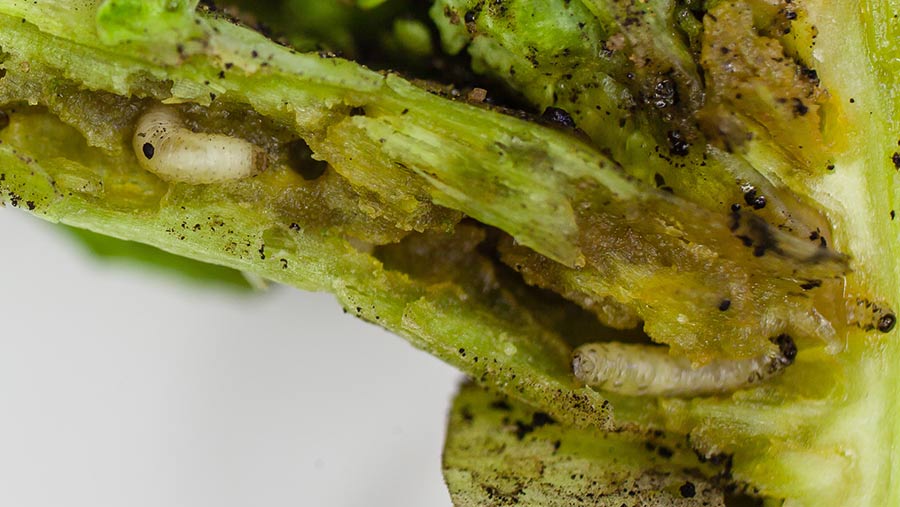 Farmers and researchers are busy testing new ways to tackle cabbage stem flea beetle larvae in rapeseed this winter, as the pest threatens the crop’s viability on some farms.

Flea beetle numbers have been increasing over the years since the EU banned neonicotinoid seed treatments in oilseed rape.

Numbers this winter are especially high, with a recent Association of Independent Crop Consultants survey suggesting 52% of surviving plants have five or more larvae.

Sacha White is hoping to get a better understanding of the yield impact of cabbage stem flea beetle larvae.

He explains that the often quoted five larvae/plant spray threshold is based on 1980s data, which showed a 0.35t/ha yield reduction.

Back then, it represented a 10% yield loss, however, there isn’t the data to confirm if this.

There have even been reports of some plants having 19 larvae or more.

This leaves the industry with a huge challenge, as flea beetle larvae are virtually impossible to control with insecticides.

One approach showing some promise is defoliation, with some plots in an AHDB-funded trial Adas carried out two years ago seeing a reduction of nearly 60%.

Sacha White, research entomologist at Adas, believes defoliation could be a possible way to break the pest’s lifecycle.

“We are struggling to do this [break the pest’s lifecycle] at the moment.

“Defoliating could be a way of doing this, thereby reducing populations.”

Three timings were originally investigated – December, January and March, the latter coinciding with the start of stem extension.

However, he says March was too late, as it had a negative impact on yield.

This winter, Adas is focusing on the two earlier timings.

For the December treatment, he is also looking at the effect of removing debris after mowing.

“This is to look at whether larvae can get back into the crop if left in the field.

“A separate polytunnel trial suggested very few can but we would like to check in the field trial.”

With the January treatment, he also looking at rolling the crop.

“Using a topper to defoliate is more practical than a mower on a field scale but farmers may not have one, but will have a roller.

“So we are looking to see if it could be an alternative.”

He is planning to carry it out when there is a frost, when the ground is hard and the low temperature makes the plants brittle.

Leaves will then break off and petioles split open, leaving the larvae exposed to the cold and predation.

Parallel to the Adas trials is an Innovative Farmers group of eight to 12 growers carrying out field-scale trials, including Jonathan Northern, who farms near Baldock in Hertfordshire.

He is in a cabbage stem flea beetle hot-spot area and was forced to drop the crop because of the problem.

This season, the crop has made a return with 40ha in the ground, although he ideally he would be growing up to 80ha if it was not for the pest.

He is looking for a way to manage flea beetle, thereby giving him more confidence to grow the crop.

In fact, if this spring proves to be bad, he admits there is a chance he will cut back on the area.

In a 16ha field, last week he flailed a 2ha block.

He is also investigating whether applying a little extra nitrogen fertiliser will help crops. 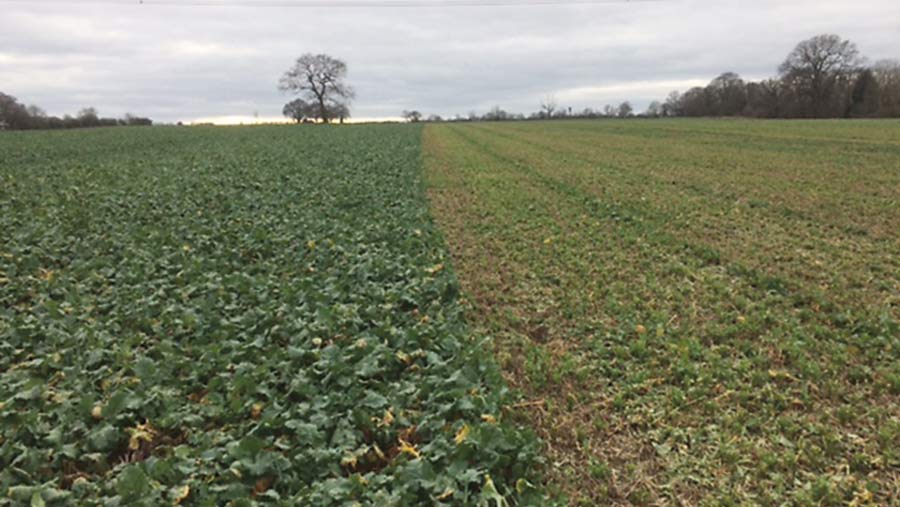 “When you get to March, the green area index is used to calculate the nitrogen fertiliser requirements of an oilseed rape crop.

“If you flail the crop, some of the nitrogen may be recycled, but there may be a shortfall.

“So we are looking to apply 30-40kg/ha as a boost to compensate for the fact you have flailed off the crop.”

He says that while his agronomist remains unconvinced that flailing can be the solution, Mr Northern believes it is worth a try to see if it works.

Dr White says the full results from the trials and the farmer network will be available next autumn, when he hopes to encourage more farmers to try it for themselves.