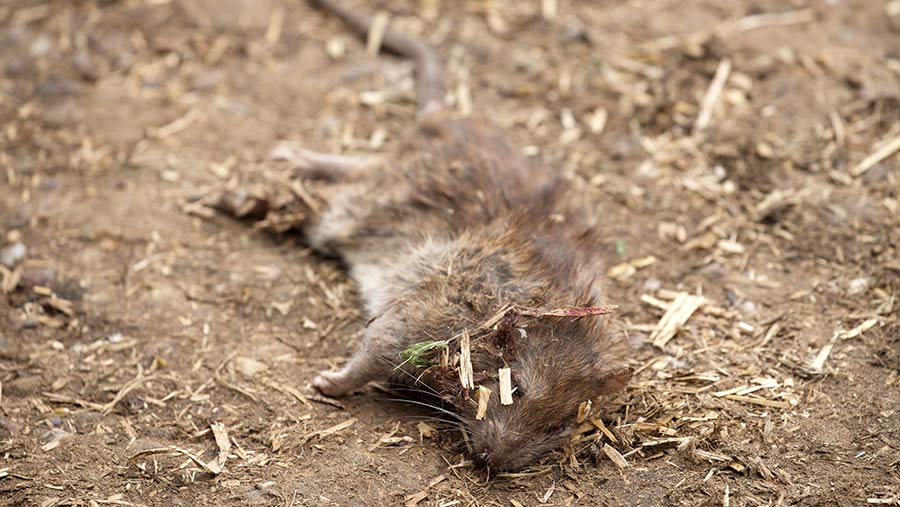 Autumn is a time when rat populations can start taking hold on a farm as food supplies dry up in the field and cold and wet weather sets in.

However, there are things livestock and arable farmers can do to try to deter rodents and reduce the likelihood of an infestation.

We speak to Dr Alan Buckle, chairman of the Campaign for Responsible Rodenticide Use (CRRU), to get some advice on managing rats.

How do you avoid rodent infestations?

Once rats and mice get established, they can be difficult to control.

Farmers often have a higher priority than tidying up their farm and removing shelter and food sources for rats and mice, but if they can do that, they can go a long way to helping reduce rodent populations.

There are three main ways to try to reduce rodent populations on a farm.

It is essential, wherever possible, to prevent rodent access to food. If there are spillages, then they must be cleaned up straight away and disposed of so rodents cannot access it.

If you have grains stores/flat storage, feed storage bins etc, make sure they are secure and clear up any spillages.

In situations where livestock are eating from a trough, rodents will have access to the food. Unfortunately, not a lot can be done to restrict their access.

Farms should be cleared of all debris, rubbish, old machinery and equipment, unwanted stores of straw and hay, as these provide perfect living areas for rodents.

Put all your clutter into a skip so the rats can’t get in.

Vegetation should be cleared around buildings to provide an open perimeter and immediate surroundings, so that natural predators can take rodents.

If possible, areas around buildings may be laid to concrete, or other hard surfaces, to prevent rodent burrowing.

Metal baffles around cables and pipes and kick plates on the lower edges of doors will prevent them being gnawed by rodents.

Door access that is only required occasionally can be temporarily proofed by adding a concrete fillet or wire mesh to the vulnerable ground-level sections.

Depending on the circumstances, drainage pipes or gullies should be proofed by fitting grilles, flaps, crushed wire mesh or other suitable materials.

What product should I use if I have a rodent problem?

The principle strategy when choosing methods for the control of rodents is to employ methods that have the least risk of adverse impact (are the least severe) but which will be effective.

You should consider the following general points when making decisions about which methods to use.

Are you living in a resistance area?

An online map highlights where there is known resistance to first-generation anticoagulant rodenticides (FGARs).

If you farm in the South, there is a high chance of resistance. If you are in a resistance area, then your options of products include the more potent second-generation anticoagulant rodenticides (SGARs).

If you have no known resistance then you can use the less potent FGARs, which have less of a risk to wildlife.

Which baits are available?

You have a choice of baits in the following forms: meals, cut or wholegrain; pellets; wax blocks; edible lards/gels/pastes; contact gels and foam; gases.

Your choice of bait formulation will be determined by the characteristics of the site, previous treatment history, the conditions of the product labels and an environmental assessment.

Which baits are best?

Generally, particulate baits are more palatable to rodents than wax blocks, but blocks may be better in adverse environmental conditions, such as sewers.

When baiting burrows, treated grain is less likely to be kicked out of burrows by rats than wax blocks.

Where should I place the bait?

Ideally, bait should be placed between the site of harbourage and where rats are feeding.

Some rats are reluctant to go into tamper-resistant bait boxes, so if there is an option to place bait so that nothing else can access it using materials available at the site, such as in breeze blocks, metal sheets, they will likely take the bait more readily. 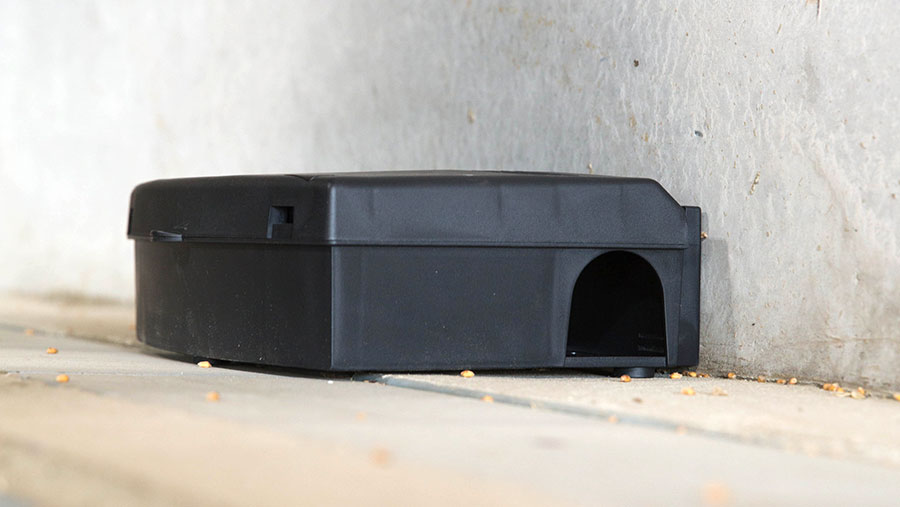 Make a written record of where you have placed the bait, which rodenticide was used and how much bait has been laid.

When you are using a rodenticide, it is important to monitor it regularly to track progress.

You should also search for and remove any dying and dead rodents and dispose of them safely, in line with the product label.

This is particularly important to reduce the risk of secondary poisoning, especially in areas where birds of prey and other predators/scavengers are known to be active, and where populations of outdoor rodents are being controlled.

Do I need to have training to use and buy rodenticides?

Yes, if you purchase, use, intend to use or store a professional rodenticide, you will need to hold a current CRRU (Campaign for Responsible Rodenticide Use) approved proof of competence to purchase or use rodenticides.

You can get a training certificate by completing a CRRU-approved course, or if you are a member of a farm assurance scheme that includes the CRRU guidelines in their standards, you can show that as your proof of competence.

What should I do if the rodenticide doesn’t work?

Rodenticide baits should only be used for as long as is necessary to achieve satisfactory control.

In most cases, any anticoagulant bait should have achieved control within 35 days.

Should activity continue beyond this time, the likely cause should be determined and documented.

If bait continues to be consumed without effect, a more potent anticoagulant should be considered.

If bait take is poor, consideration should be given to re-siting the bait points and possibly changing to another bait base, as well as making other environment changes.

Last year, tougher restrictions on permanent rodenticide baiting were introduced by the Health and Safety Executive (HSE) as a measure to reduce residues in all UK wildlife.

Where permanent baiting is justified, some baits containing bromadiolone or difenacoum are allowed, but not all.

Those containing the other three second-generation anticoagulants are prohibited.

Rodenticide users need to check product labels carefully before use.

Where permanent baiting is allowed, baiting is strictly limited to sites with high potential for re-invasion when other methods of control have proven insufficient and bait points require re-inspection at least every four weeks.

It is not allowed as a “just-in-case” preventive measure, when no signs of rats and no high reinvasion threat is present.

Are there legal requirements to use rodenticides correctly?

Yes. The HSE has stated for permanent baiting you must follow CRRU guidance.

It has the power to prosecute if the rules are not followed.

Many farm assurance schemes also include the CRRU guidelines in their codes.

You can check the schemes involved at the Think Wildlife website.

What are FGARs and SGARs?

First-generation anticoagulants rodenticides (FGARs) – warfarin and coumatetralyl – are less acutely toxic and are less persistent in animal tissues than the second-generation compounds.

Their use is to be preferred over second-generation anticoagulant rodenticides (SGARs).

However, where there is known resistance, do not use these products.

Therefore, they present the greater risk to non-target animals and the environment.

They should be used only when other methods of achieving rodent control have been carefully considered and found to be unable to provide an effective solution to the rodent pest problem present at the site.