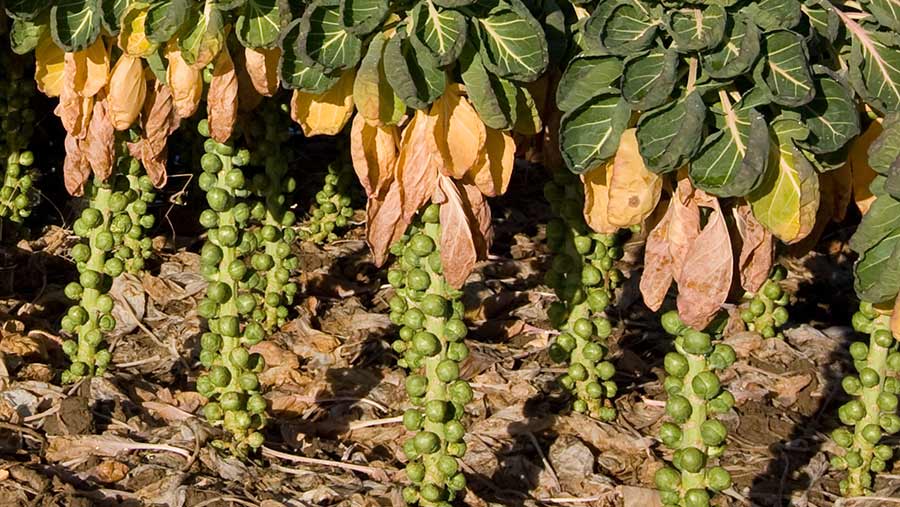 Sprout growers are seeing losses from diamondback moth attack as harvest reaches its peak, after 10 times the usual numbers of the major pest invaded crops earlier this season.

Diamondback moths, which feed almost exclusively on brassicas, arrive annually from continental Europe and they are often described as a “super-pest” due to their rapid life cycle and insecticide resistance.

Richard Mowbray, commercial director at Lincolnshire-based vegetable grower TH Clements said that the diamondback moth had been a significant problem this season with a significantly higher than normal population of moths seen.

It’s estimated that as much as 80% of total British sprout sales take place in the two-week Christmas and New Year period, and there are just 10 growers in the UK with significant areas grown.

Much has been made in the media (see Guardian article) of the potential impact on the traditional Christmas dinner, but Mr Mowbray says that although planted areas and yields are down slightly on previous years, there are plenty of sprouts to go around.

“It has been a mixed picture with damage,” Mr Mowbray tells Farmers Weekly, explaining that amount of losses seen in the field depended on the type of control strategy used.

He said that pyrethroid resistance had been a significant issue across much of their brassica cropping, and had contributed to significant losses in cauliflower and cabbages as well as some greenhouse crops back in June and July.

However, they had seen better control in their organic crops compared with their conventional sprouts using a spray licensed for organic use.

Mr Mowbray says he is upbeat about the future of the sprout, saying that UK consumption was on the rise with a widening window over which people were eating sprouts.