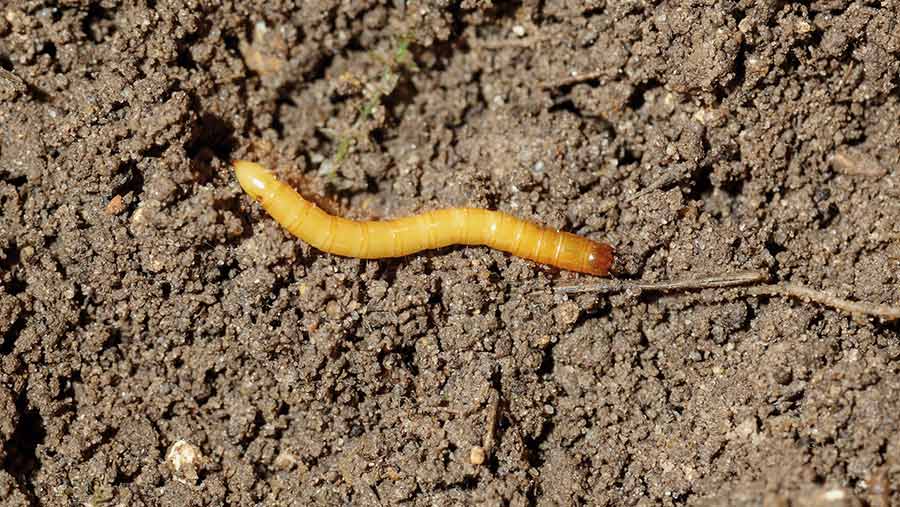 Evidence suggests that wireworm damage in potatoes has been getting more severe and widespread and, in some cases, has led to growers losing £100,000s in revenue.

This worsening problem has prompted plenty of research activity to try to find solutions for growers looking to protect their investment in what is a very expensive crop to grow.

We ask them about the main findings and outline what action growers can take.

Risk factors – why is wireworm getting worse?

What species are important in the UK?

The wireworm species in the UK that are economically important to the potato crop are Agriotes lineatus, Agreotes obscurus and Agriotes sputator, and are found across the potato area.

Some are widespread and can damage potato crops, but the three main species are usually responsible.

Agriotes sordidus is generally a southern European species, but evidence in France indicates that it is moving northwards and becoming a very significant problem for crop producers.

Independent agronomist Martyn Cox, one of the study’s authors, says at present there is no evidence the species is an economic problem in the UK

But A sordidus adults have been trapped in coastal areas and researchers need to better understand its importance to growers.

What are the key differences?

Most agriotes species have a five-year lifecycle, where adults lay eggs between April and June in year one, which hatch and grow from just a few millimetres to 2cm before pupating in the soil in late summer of year four.

Adults then emerge again the following spring to start afresh.

Understanding where field populations are in this lifecycle in relation to the potato crop is key to effective control of the pest, so growers need to think about what is happening in the previous four or five years before planting.

Wireworm larvae are most sensitive and vulnerable just after hatching. Once overwintered, they toughen up and become much harder to kill. This is likely to be the best time to deploy intensive cultivation or a biofumigation crop, for example.

Other species, including A sordidus, are known to have a shorter lifecycle, so damage to crops can occur earlier. This underlines the importance of knowing which species you are dealing with.

Can growers sample soil for wireworm?

Wireworm core sampling has a limit of detection of 62,500 larvae/ha, but crop damage can occur well below this level.

This means soil core sampling, where a large soil core is taken from the field and larvae extracted from the sample, is currently not viable for quantifying a damaging population. The large volumes of soil taken also pose practical challenges.

However, Dr Alison says with the introduction of mechanised automated sampling systems, the use of this method may become advantageous, and fresh research may be worthy of funding.

What are the pros and cons of trapping?

There are two types of traps that can be used for monitoring wireworm – pheromone traps and bait traps.

Pheromone traps use sex pheromones specific to a particular species to lure in male adult click beetles as they try to find the females and mate.

Bait traps contain a pre-soaked cereal seed mix, ideally maize and wheat, and are buried just under the soil surface.

As cereal seed germinates, it gives off carbon dioxide and other volatiles which attract larvae into the trap via small holes.

From his own work in recent years, Mr Cox says the pheromone traps available have improved significantly and are now much easier to use.

They are a tool for monitoring pest activity in a landscape and they can highlight where the pest is moving into fields.

They will not always reliably indicate the presence of larvae, as correlation between A lineatus adults and larvae is weak, but can be better for the other main two species.

At present, there are no pheromones for species such as Athous spp, which is a common click beetle in the UK.

Until more is understood about behaviour, and pheromones are available for all economically important species, there are limitations to pheromone trapping.

Bait traps are much better at providing evidence of wireworm activity in a particular field, and a key factor in their success is soil temperature and moisture.

Both factors strongly influence the activity of wireworm in soil.

In the past, people have used them before potatoes in early spring, when soils are cold and wet.

Despite not catching any larvae, they have subsequently seen damage in the crop planted soon after.

Research from around the world suggests that Agriotes spp larvae are not active in soils below 8C, and they are also much less mobile in very wet, very hot or very dry soils.

This means bait traps are better deployed elsewhere in the rotation when conditions are just right. A cereal stubble preceding potatoes is a slot where Mr Cox has had good success.

As well as increasing the chances of detecting a problem, it also allows growers to react, perhaps earmarking areas to manage differently at harvest, or moving potato production elsewhere.

A trick with bait traps where soils might be on the threshold of being too cold is covering the top of the trap with a polythene sheet, which has been shown to boost mean temperature by 1C, increasing chances of catching larvae.

Are some varieties more susceptible?

There is evidence from research in the UK, Europe, and the Middle East that glyco-alkaloid concentrations in tubers are a factor in a variety’s susceptibility to wireworm damage.

Reducing sugars, mainly glucose and fructose, also appear to be strongly implicated and there could be a balancing act between all these factors, depending on which are dominant.

Despite lack of detail as to why, there are clear differences observed in the field, with varieties such as King Edward and Agria less susceptible to wireworm damage and Marfona, Maris Peer and Rooster more susceptible.

Efforts are ongoing to paint a more conclusive picture.

Where growers are expecting problems, they may consider planting a less-susceptible variety and/or one suitable to a less-restricted end market (for example, processing), reducing the risk of very costly downgrades.

Less-susceptible varieties could also be targeted to specific high-risk areas within a field, such as headlands, or next to a source of adults.

It should be noted that even varieties thought to be less susceptible can still suffer damage above customer threshold, as there can be more holes in the surface of tubers. However, those holes may not be as deep.

Harvest date also has a significant influence on damage, and choosing an earlier variety or managing a crop to bring lifting forward will also help minimise damage.

Are there any other important risk factors?

Simply looking across the landscape can offer insights into where wireworm may threaten a potato crop.

Ground following grass or other permanently uncultivated land uses is a well-known risk factor, even if the land has been back in arable production for several years.

More recently, permanent margins have been established around fields and are causing more wireworm movement into crop headlands.

Increased risk also extends from nearby environmental areas, which are positive for biodiversity, including click beetles.

Mr Cox has even trapped huge adult numbers coming out of the area adjacent to an irrigation reservoir.

Understanding where these external sources of risk are and how to manage potato crops nearby will help mitigate any crop losses.

What about no-till and cover crops?

One question many potato growers will be asking is whether no-till systems that integrate cover crops into the rotation are compatible with managing wireworm.

Wireworm numbers can be reduced by cultivation and the pest does not survive well in bare soil, as they don’t have a food source.

However, some land managers are aiming to leaving soil undisturbed and maintain cover year-round.

There is no doubt that this increases risk, but Mr Cox says this doesn’t necessarily mean changing direction on regenerative practices.

Evidence from various sources indicate that faba beans, soya beans, trefoil, buckwheat and mustard may all suppress wireworm and could be integrated into rotations or cover crop mixes as part of an integrated strategy.

Are there any direct control measures?

Since the withdrawal of granular soil-applied insecticide Mocap (ethoprophos), growers have had no options for controlling wireworm in short-season crops.

Using a granular form of pyrethroid lamba-cyhalothrin in-furrow is permitted in France, but 50% control of damaging populations is about the most that can be expected.

There are also some novel biological products coming through, with BASF expecting registration of a granular product containing Beauveria bassiana pathogenic fungi, which delivers a similar level of control.

The use of biofumigation crops such as caliente mustard have been tested by Adas and showed it can sometimes be effective.

However, there is little benefit against large larvae, with evidence suggesting that biofumigation should be timed against the young larvae as part of an integrated strategy.

What is clear is that in high-risk situations, these products or practices will help, but is no silver bullet, and all need to be used in combination with other IPM strategies.

Without highly effective chemical control, the key is to use all the tools available – including pheromone and bait traps, landscape studies, rotation and variety – to gather intelligence and assess risk.

This will allow management practices to be adjusted based on their effect on click beetle egg laying and survival.

Turning some of the high-risk scenarios into more moderate or even low-risk ones through the rotation will then minimise damage to the potato crop.

For example, cereal crops followed by cover crops are at high risk in the two to four years ahead of potatoes, and options should be considered. Any cereal type will usually provide suitable shelter and food for the pest.

This article was based on some information presented at the 32nd Cupgra Conference at Robinson College, Cambridge.