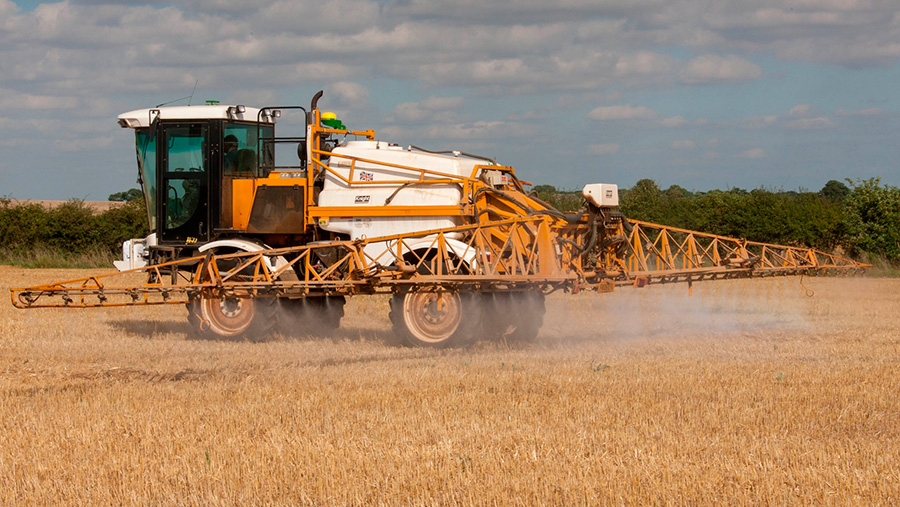 Industry leaders are asking farmers to lobby MEPs for the urgent re-authorisation of glyphosate, warning that its loss would trigger a fall in UK cereal production.

The NFU wants growers to contact their local MEP to tell them the importance of the herbicide on their farm – and the potential consequences if it becomes unavailable.

The union will write to EU health commissioner Vytenis Andriukaitis and UK members of the European Parliament’s agriculture and environment committees over the coming days.

It comes ahead of a plenary vote later this month by the European Parliament on whether the European Commission’s proposed re-authorisation of glyphosate should be removed.

The vote, on whether to remove the authorisation pending further analysis of the environmental and human health impacts of the herbicide, is not legally binding.

However, it will set the tone for the commission’s considerations ahead of a final vote between experts from EU member states.

The NFU is urging MEPs to oppose the resolution.

From an MEP’s point of view a letter from a constituent can influence their opinion, and potentially their vote, which is why we’re urging farmers to do this Guy Smith, NFU

European umbrella farm organisation Copa-Cogeca has already written to MEPs, urging them to ensure that glyphosate remains available on the EU market.

Although some studies suggest glyphosate can cause cancer, the NFU will cite a conclusion from European food safety watchdog, the European Food Safety Authority (Efsa), that “glyphosate is unlikely to pose a carcinogenic hazard to humans”.

NFU vice-president Guy Smith said: “Glyphosate has long been used on farm as a broad-spectrum herbicide to control pernicious weeds before planting.

“This practice allows the farmer to avoid more expensive cultivation techniques such as ploughing.

“This is proven to be good for climate change mitigation by reducing fossil fuel usage in tractors and subsequent greenhouse gas emissions.

“Furthermore, these minimum-tillage establishment practices have additional environmental benefits and have been shown to have positive effects on biodiversity and decrease soil erosion.”

A study by farm business consultants Adas put the estimated value of the use of glyphosate in the UK arable sector at an estimated €633m/year.

It said the loss of glyphosate would likely see a decline of production of winter wheat and winter barley by 12% and oilseed rape by 10%.

Loss of availability in the livestock and dairy sectors would result in an inability to tackle invasive and poisonous species such as ragwort in grassland, said Mr Smith.

“We’re keen that farmers make the case for glyphosate use on their farm to their local MEP.

“From an MEP’s point of view a letter from a constituent can influence their opinion, and potentially their vote, which is why we’re urging farmers to do this.”

Copa-Cogeca secretary-general Pekka Pesonen said “After Efsa confirmed its safety, we expect the EU Commission to extend the authorisation in June.

“Glyphosate is widely used in herbicides in all EU member states and a key part of farmers’ toolbox due to its availability and cost-effective price,” said Mr Pesonen.

“Without this, cereal crops as well as vineyards, fruit and olive production across Europe would be seriously threatened.

“This would be unacceptable given the current agricultural crisis and the need to meet growing world food demand.

“Chemical control is also a prerequisite for some farming practices such as no-till and minimum-tillage, contributing to less greenhouse gas emissions and soil erosion.”

Glyphosate was the most widely used herbicide in the world, said Mr Pesonen.

“Not approving this active substance would consequently benefit non-EU countries that export to the EU, as it would still be part of farmers toolbox in these countries.

“We therefore urge the EU to maintain this product on the market.”