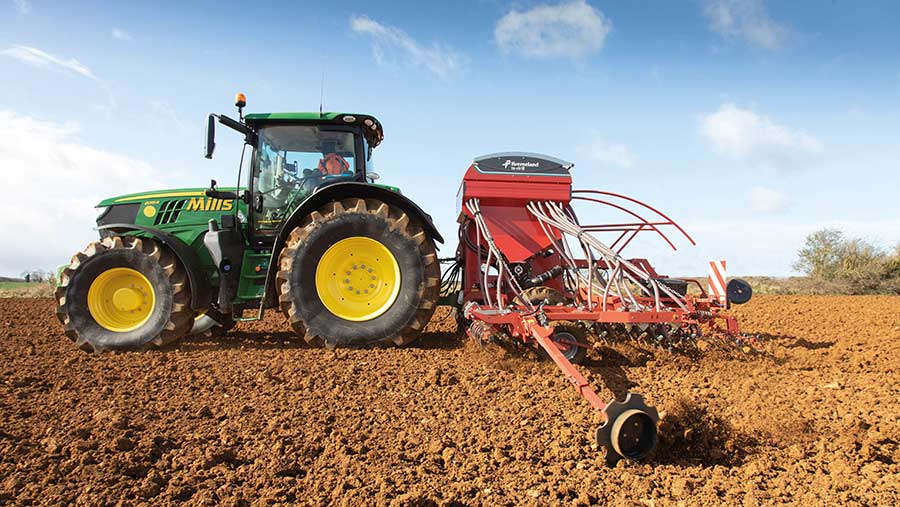 Many farmers are being forced to make changes to their rotations on the back of two wet winters disrupting cropping plans and the key break crop oilseed rape becoming too risky to grow in some parts of the UK.

However, coming up with the right plan isn’t straightforward with so many factors influencing crop rotation planning, from weed pressure to government policy, markets and cashflow, as well as local and personal considerations.

Faced with this, independent agronomist Marion Self of Prime Agriculture believes a good starting point is to review recent changes to the cropping mix.

“It’s worth taking some time to think about how the rotation has changed over the past five years and consider the expected changes going forward,” she says.

Armed with that knowledge, she has eight key pointers to help farmers design the right rotation for their farm.

“They’re getting as much profit as they can from those break crops and are also having an affect on the cereal rotation going forwards.”

To reduce risk, many farmers are growing less oilseed rape or have given it up altogether. “Farmers have taken on board trying to manage issues such as cabbage stem flea beetle. Recently they have really focused on changing insecticide regimes in the autumn, nutrition, companion crops and adapting sowing times – all to mitigate against rapeseed risks.”

Reducing the level of early inputs on rapeseed is another way to lessen risk, although a certain amount of nurturing and inputs is required to get the crop through the autumn and winter.

“Sometimes it doesn’t work out and it’s time to move on from oilseed rape and work out what to grow instead.”

Scientific advances are also helping farmers to make more real-time decisions such as adapting nutrition and disease programmes with leaf testing, for example.

If it’s time to change and try a new crop, take it steady and talk to other people who have tried it before, suggests Ms Self. “Start small and find out what works, then monitor the results.”

If new machinery is needed, consider getting a demo, see what a neighbour is doing, or get a contractor – try to work together before making big investments.

It’s also very important to measure and analyse the change – was the result expected or was there another factor which influenced the outcome?

There is always a debate over whether to use net or gross margin, explains Ms Self. “As an agronomist, I often use gross margins because it is a useful comparison between crops, but it doesn’t always show how profitable a crop is.

“On individual farms a more useful comparison would be net margin, because that includes total cost of production – taking into account fixed and variable costs.”

Although on paper winter barley may not look like the best option financially, it has other benefits. “It gives earlier harvests, spreads workloads and gives an opportunity for early entry of oilseed rape – so it can play an important part in the rotation.”

Weigh up variable and fixed costs for each crop, and take time to evaluate and scrutinise them, perhaps with a third party, she adds. “Look for opportunities and do the figures without basic payments.”

However, just choosing the highest average gross margin is not sustainable. “In the past, there have been short-term gains for rotations such as wheat, wheat, oilseed rape, but we’re now paying for it in grassweeds and cabbage stem flea beetle.

“These problems can be expensive to fix and eventually lead to a more varied rotation being the most appropriate thing.”

4 Think about local markets and contracts

Evaluate local markets and contracts – are there any premiums worth pursuing? “That might be growing seed, brewing varieties, micronising peas – there are markets out there,” says Ms Self.

“Make sure you can meet those premium specs if your margin depends on it. Decide if it is achievable with the soil type, weather, combine capacity and harvest delays, as they can all affect timing and specification, so be realistic.”

Although it might seem mundane, making sure there is enough storage is important. “Do you have the ability to segregate and store different types of crop? Or crops which are going for different markets?”

The impact of the rotation on soil structure and fertility is increasingly under the spotlight. Consider pulses for nitrogen fixation, linseed to improve soil friability and mycorrhizal fungi, and brassicas for deep penetrating roots, for example.

Weeds, pests and diseases are the age-old reason farmers implement a rotation. “Bring a diversity of cropping in to tackle a build-up of these issues, and change crop type to allow for use of different active ingredients, to prevent resistance build-up.”

Cover crops are great for soil fertility; they reduce nutrient leaching between crops, stabilise and restructure the soil and build organic matter. “The greater the range of crop types grown, the greater the level of farm biodiversity- both above and below ground.”

Cover crops are not usually in the ground long enough to build up pests and diseases, but if growing a brassica cover crop with oilseed rape also in the rotation, there is a worry about club root. “Try and avoid it and find something else.”

Sometimes it is necessary to leave land fallow, but avoid it if possible, warns Ms Self.

“If you have more fallow you have less cash coming into the business and more fixed costs over a smaller area. You can’t always reduce other costs to compensate for that reduction in income, unless you make some fundamental changes to the business.”

It’s hard to know how new crop options within environmental schemes will fit into existing rotations, but try to choose a scheme which will reduce fixed costs instead of increasing them, says Ms Self.

“Choose a scheme that gives an additional financial benefit – it might not be an immediate benefit, but it should cause a positive impact in the medium term.”

8 A long and flexible rotation

It is really important to have a plan, but be prepared to make changes if necessary. “The past two years have been really challenging in terms of wet autumns and dry springs – meaning not all the planned winter wheat got drilled and some spring crops were drilled later than was ideal.”

If drilling of autumn cereals is delayed, think about if it’s time to switch to a spring option – predict the likely yield and calculate the likely impact on the margin, so as to know where the breaking point is.

A long rotation is best, if possible. “A rotation that gives more opportunities to add organic matter, such as using muck or cover crops and allows opportunity for liming, drainage and ditching – all which are important.”

In terms of the optimum gap between growing the same crop, the theory is the longer the better, but that’s not always practical. “For pulses it’s usually one in five years, for oilseed rape one in four – there has been research to say lengthening the rotation can bring back some of the yield lost over the years.”

Budget for different rotation scenarios – a long rotation may bring in as much money as a shorter one in the long run. And practicalities have to be considered, adds Ms Self.

“Choosing a rotation that reduces your risk and improves your soil is the best path towards sustainability.”

Marion Self was speaking at a recent AHDB rotation planning webinar