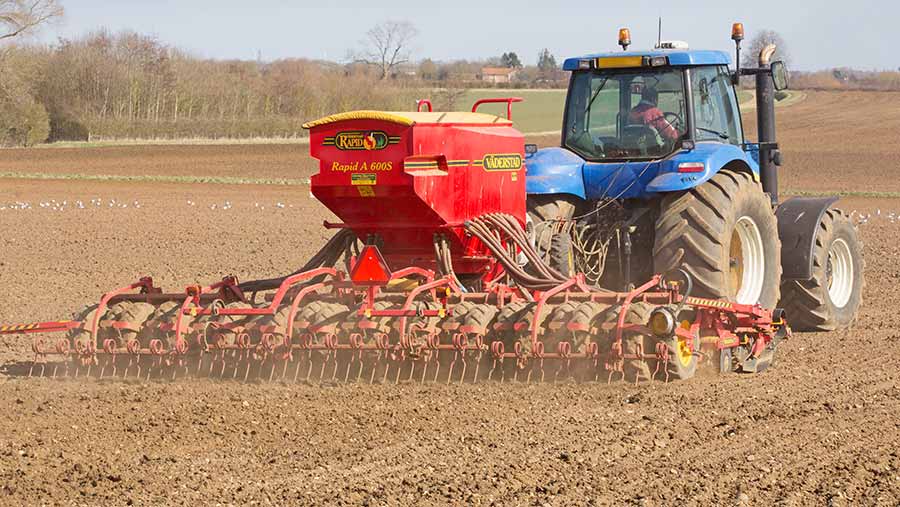 Arable growers are set to switch further into spring cropping to tackle blackgrass, cut input costs and make the most of niche markets, and spring barley is often seen as the easiest option.

An AHDB Early Bird survey estimates that spring barley plantings in 2018 will increase by 3% to 773,000ha – the fourth consecutive year showing a rise.

Graham Redman, Andersons consultant and author of The John Nix Farm Management Pocketbook, says spring barley could see a big crop area – meaning that the market might have a job absorbing it all and maltsters will have plenty of choice.

See also: Why spring crops are a better bet than autumn-drilled ones

He adds that with average gross margins estimated at £570/ha, spring malting barley still offers an attractive return to growers.

While lots of growers are using spring barley to control current blackgrass problems, they should be thinking long term as grassweed control is about prevention as well as removal.

Linseed is a crop that is creeping back into fashion and with increasing demand and potentially high gross margins, it is likely to continue this growth pattern.

“As a break crop, linseed fits nicely instead of barley or oilseed rape. It can be drilled late, allowing a couple of flushes of blackgrass before it is planted – unlike spring beans,” says Nigel Padbury, seeds and marketing manager at Premium Crops.

Growers might have reservations about linseed due to its reputation for being temperamental to harvest. However, a survey by the group revealed that 90% of growers found it easy to harvest.

Financially, a high yield of linseed stacks up nicely compared with other options – and there is also the option of growing high Omega-3 linseed varieties for a premium.

Companies like the traceability and reliability of British linseed producers, explains Andrew Probert, managing director at the seed company.

Growers need to be prepared to agree early contracts as about 80% of UK linseed is grown like this, meaning the market price has little effect on the value they get.

“Farmers need to minimise risk, so make sure you are not on a fixed tonnage and have wide parameters – even if that means trading a bit of price for a generous fall back,” he adds.

Looking to legumes, the pulse area is estimated to be lower for the 2018 harvest. The AHDB estimates the planted area will fall by 6% to 219,000ha, wiping out all of the gains the crop area has made over the past two years.

Some growers had been growing pulses to meet Ecological Focus Area requirements and now these have changed they might stop, explains Franek Smith, president at the British Edible Pulses Association and pulse trader at Dunns.

“If the area is reduced then anecdotally prices will go up, but that will depend on global markets,” he says.

Mr Redman from Andersons says, “The price spread over wheat is not great, meaning the premium for human consumption pulses is really important now.”

He suggests maximising quality by keeping the crop as clean as possible and making sure that the timing of harvest, as well as input applications, are spot on.

Most human consumption beans are exported to Sudan and Egypt, and Sudan’s import licence will expire in February.

“Everyone who wants to sell to Sudan has already bought up supplies. With Egypt, there are not enough quality beans available and it is currently looking to the Australian crop,” says Mr Smith.

“Both are worth £30/t more now than they were at this time last year. There is definitely scope for farmers to make good gross margins on pulses,” he adds.

Mr Smith advises looking at margins on a two-year basis as pulses are nitrogen fixing, potentially adding yield to the following crop, among other benefits like blackgrass control and soil conditioning.

The spring wheat area is also forecast to rise, continuing an upward trend seen over the past few years – with gross margins expected at about £540/ha for milling varieties.

Going further down the niche route, canary seed might be an option for some growers, with contracts available and a decent anticipated gross margin of £500-£550/ha.

Whatever crops growers opt for, it’s important to think about marketing at an early stage, and they should make sure they have a market and a contract before putting a premium crop in the ground, says Mr Probert.

“Indeed, the differentiation between spring and winter crops has become rather blurred in recent years, with varieties that have a long drilling window,” says Mr Redman

Gross margins are always important, but they are not everything.

“Focus on yield at minimal cost. Reducing costs at the expense of yield or maximising yield at any expense are two erroneous paths to take. Commercial productivity is the first rule of sustainability,” he says.

The profitability of spring cropping options for 2018

2018 spring gross margins, The John Nix Farm Management Pocketbook: These figures have been independently and impartially generated using industry data and with no commercial interests in any of the crops.