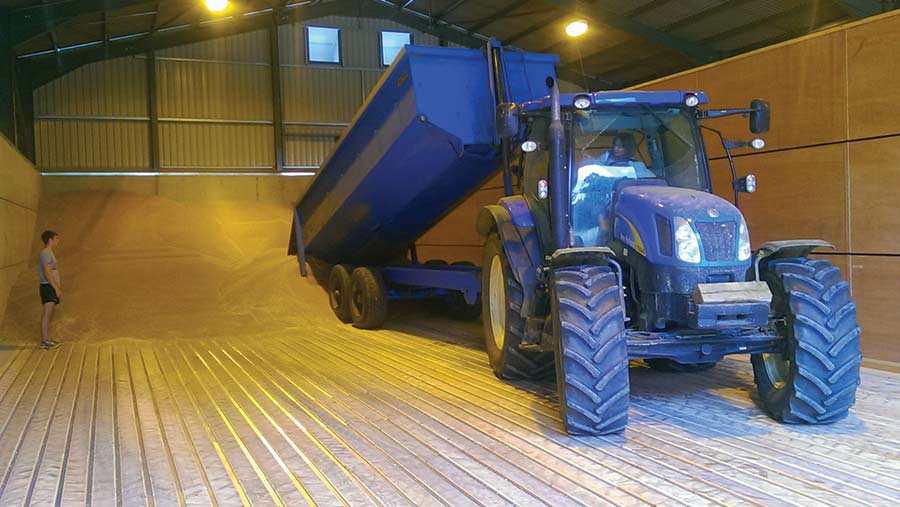 Building a new grainstore is rarely a straightforward task. Essex farmer Nick Cousins explains how he tackled the project this summer.

Putting up grain facilities that will still be fit for purpose a generation from now – and keeping within a tight budget – isn’t always easy.

Costs can overrun and buildings physically take longer to put up than you planned for. And local councils can spring unexpected rules on you, too.

Why did we do it?

The existing round-bin grainstore, consisting of 12 100t outdoor bins, had worked well for many decades but was nearing the end of its life. Increasing combine output, rising maintenance bills and nagging worries about the danger of the sweep auger all played their part in deciding to make a fresh start.

Who did we get to tender?

We had three quotes from Tey Farm Systems, Ernest Doe and Weatherheads, all for a 21m x 30m grainstore. In the event, we went with Tey Farms, not just because they came in at the most competitive price overall, but also because they provided the most detailed cost breakdown by some way.

The other two companies gave rather thinner amounts of information in their quotes. In fact one of them (we’ll spare their blushes) made a £30,000 error in their costings, which didn’t fill me with confidence.

So in the last working days before Christmas 2014 we placed our order. In hindsight I wished I’d had the application on the planning officer’s desk on the first working day of the New Year.

How did the planning go?

We had to go for full planning permission but I used the experience of the main contractor to help me complete the paperwork.

All was going smoothly until someone living eight miles away queried the potential noise from the fans. The local council were suddenly very concerned about decibels.

As a result, we decided to put in a sound-attenuating louvre at a cost of £4,400 to keep everybody happy, including the local planning officers.

By early April planning permission came through and the groundworks started straight away.

Did we keep costs under control?

Yes, but we had to make sacrifices. The part-hardwood, part-softwood drying floor was abandoned in favour of much cheaper softwood.

Also, our lack of three-phase mains power for the fans had to be addressed. We knew from talking to farming neighbours that the power company would charge an exorbitant figure for connecting us to the mains so we had to think of an alternative.

In the end we plumped for the decidedly old-school (but effective) solution of an engine-powered system, with single-phase mains power for the lights and roller doors.

Did we consider a generator?

Having been plagued by untrustworthy generators in the old grainstore, reliability was vital for us.

So we opted for a £14,000 Ventacrop engine-powered fan, which was cheaper than the combined cost of a new generator, switchgear and electric fans.

How well did it dry the corn?

The added advantage of making your own power on site is that you get a lot of free heat from the engine. This drops the relative humidity going into the store by about 8-12%, which meant no extra burners at all were used this year.

Drying continued during August evenings with the RH remaining above 65% until bedtime. We finished the drying by mid-September.

However, we had an easy ride this year and constant humidity controller (CHC) burners will be on our shopping list for harvest 2016.