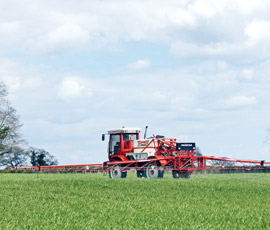 Weed control rises to the top of the to do list this week, while the recent rain means disease risk could rapidly increase in the coming days, warn our Crop Watch agronomists.

The late flush of broad-leaved weeds currently emerging is Agrovista agronomist Tim Bullock’s biggest concern this week – the main culprit is bindweed, but there is also fat hen, red shank and cleavers.

“These can be taken out easily on late crops with the T1, but the earlier crops will have to wait until flag leaf fungicides are sprayed.”

In the North, Paul Sweeney has applied Atlantis (iodosulfuron + mesosulfuron) to all wheat crops beyond GS30 (end of tillering), but there are still some backward crops not yet at that stage.

“This has given outstanding control of annual meadow grass, wild oats, ryegrass and a lot of broad-leaved weeds.”

Another concern is the effect of the recent warmer and showery weather on disease risk. Prime Agriculture’s Marion Self warns that disease levels could suddenly rise, especially with rapid growth as crops respond to recent high doses of nitrogen.

“On crops with lower yield potential there may be scope to reduce fungicide spend, but remember good disease control on the flag leaf will be very important to maximise its potential.”

In the South, Mr Bullock says septoria levels are still fairly low, but are likely to spread quickly now. “I’m glad that T1 programmes have, mostly, been SDHI-based with sensible rates of triazole. “

AICC agronomist Bryce Rham also opted for SDHI chemistry in the T1 for his forward wheat crops that didn’t receive a T0 because of the lack of opportunity. “My forward wheat crops all have leaf two fully out with the flag leaf poking through on the main stem.”

He plans to follow this with a T2 using the same chemistry.

“All of what I call the ‘later’ crops have had a standard T1 with the intention of using new SDHI products at T2, as I am convinced that even if full yield potential is not achievable they will pull the yield up.”

He adds that yellow rust can be found on some crops, but it has not got any worse and he has added strobilurins in the T1 mix to ensure the problem does not get any worse.

Read their full blogs at the Crop Watch web page