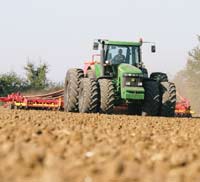 Oilseed rape plantings are thankfully well ahead of last year, Crop Watch agronomists are reporting, with weed control top of the agenda for the coming week, along with wheat drilling.

Bryce Rham, Shropshire, said virtually all oilseed rape in his area would be drilled by the end of the week. The most forward crops had two to four true leaves.

In the east, Lincolnshire AICC agronomist Ruth East was preparing for her clients to treat crops established via the sub-soiler technique with a graminicide in mix with a general weed control herbicide. “Product choice depends on whether blackgrass is present,” she noted.

But the dry conditions had helped keep slug activity relatively low, Mr Stephenson pointed out. “Fortunately the amount of slug pellets applied is much lower than last year.”

That didn’t mean growers should be lulled into a false sense of security about slugs, warned Nick Brown, a Chemega agronomist based in the home counties. “I have growers with high levels of slug activity and some have had to re-drill. Be vigilant if we get any rain this week; expect slug activity to increase massively.”

All four agronomists noted that wheat and barley drilling had started. Check thousand grain weights of seed lots, Mr Rham stressed. “It is varying from 49-59g, so check to ensure appropriate seed rates.”