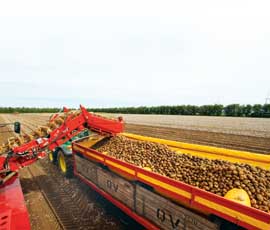 Crops with enough moisture have grown away rapidly in the recent warm weather, keeping spray operators busy tackling pests and weeds. And forecast rain should help other areas still struggling in the dry.

Frontier Agronomist Brian Ross said showers 10-14 days ago had helped even up patchy crops in his area of Suffolk and seed-beds were the best seen since the early drillings.

However, conditions had encouraged some high levels of disease. “For the first time in many years I am having to control mildew in some varieties of barley, along with some alarming manganese deficiencies,” he said.

Phoma thresholds were likely to be reached in oilseed rape crops in the next few days, said Mr Ross. “Products with PGR effects need to be factored in to attempt to reduce canopy height.”

Cheshire growers had made good progress and most remaining drilling was after maize and potatoes, said AICC member Paul Sweeney.

But Lancashire growers whose drilling programmes were delayed after a prolonged harvest were suffering after a wet fortnight, and more rain was due.

The hidden menace for most was insect pests – cabbage root fly on oilseed rape crops and aphids carrying barley yellow dwarf virus on cereals. The warmth had also encouraged plenty of weed growth.

“Early-sown cereals are set to receive a top-up to make sure we nail the grass weeds. Choice of spring herbicides depends largely on how well we control them now.”

In Somerset, concern was mounting over dry seed-beds and the effect on pre-emergence herbicide activity, said Stephen Harrison of South West Agronomy.

However, mid-September-sown wheat was tillering and two-leaved blackgrass which survived the pre-emergence treatment was scheduled to receive Atlantis (mesosulfuron + iodosulfuron) imminently. “We will also look at Dow’s GF-2070 (pyroxsulam + flupyrsulfuron-methyl), especially where brome is a big issue.”

Phoma was present at very low levels in most rape crops. “A return to showery weather will cause rapid spread of spotting, but with little rain forecast we are keeping our powder dry for the moment.”

Rain forecast for this week should help crops in Hampshire and Wiltshire after weeks of unseasonably dry weather, said Agrovista’s Swaran Bachoo.

“Early-drilled cereal crops with roots in moisture are growing well, albeit rather slowly, but later crops are standing still and starting to struggle.”

Autumn residuals had mainly worked remarkably well despite the dry weather. However, large numbers of blackgrass plants had appeared in some treated fields and would need a mid-season herbicide treatment.

“In this instance, wait for crops to harden and until at least a couple of frosts have occurred,” he advised.

Phoma was evident in most oilseed rape fields and at the 10% threshold level.

Slow store filling due to the protracted potato harvest in Scotland meant getting cold store doors shut and temperature pulled down were a priority to preserve potato quality.

“Tuber temperatures going into store have not fallen below 10C, which means curing should have been completed within 7-10 days of lifting,” said SAC’s Matthew Smallwood.

Most boxes contained varying degrees of rotting tubers, so temperature should be reduced by 0.25-0.5C a day until temperatures were below 6C, he added.

Box stacking patterns would be critical, and any gaps where air could shortcut back to the fridge could be blocked up with plastic. “If there are any hot spots, consider putting extra fans in the roof to provide additional benefits,” he said.