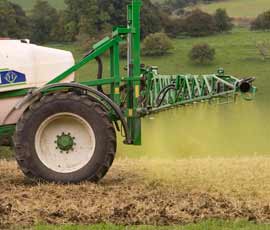 In the West, Stephen Harrison of South West Agronomy said that forward winter barley crops, particularly Cassia, were heavily infested with mildew and a lower level of brown rust. “The dirtiest crops are receiving a morpholine fungicide to preserve biomass which is a key yield driver in this crop.”

Across in the East, Brian Ross of Frontier Agriculture said that he had received many queries in the last week whether to spray cereals with fungicides.

“Winter barleys in this area are covered in mildew and quite rank in growth. There is some debate about the thickness of the crop needing to be controlled and if control of mildew does occur, will this lead to too many tillers being left and, therefore, a possible loss in yield.”

Mr Ross also believed that later barleys were at risk if this weather continued. “There has already been some fungicide treatment applied and I suspect more will be done this week.”

It’s a similar story with wheat, but to a lesser extent. “Having spoken to some of our researchers, the inference is to still wait for the frosts to arrive, as no one has had any real positive responses to a fungicide application in the autumn,” said Mr Ross.

Aphids were also a concern this week. AICC agronomist Paul Sweeney of said that most of his client’s September cereal sowings had now been sprayed twice – the first mainly targeted grassweeds and the second mainly for aphids carrying barley yellow dwarf virus.

“We’ve only had one slight frost and daytime temperatures are still above 12C, ideal for breeding more aphids. Many of the second applications were to Deter-treated crops, where the seed dressing will now have worn off.”

The mild conditions, and good levels of blackgrass emergence, also meant conditions were ideal for autumn contact herbicides and a dry spell this week should see a lot of spraying completed, said Mr Harrison. “Winged aphids are being detected in cereals, therefore, an aphicide will be added.”

Mr Sweeney added that grassweed control had, mostly, been good. A few growers have severe problems with ryegrass or volunteer oats, and so had been using either Axial (pinoxaden) or Atlantis (iodosulfuron + mesosulfuron), depending on the crop and the weed spectrum.

In the South, the recent rain meant there was now a phenomenal amount of blackgrass in both wheat and barley, especially in fields where a non-inversion cultivation technique had been adopted, said Agrovista’s Swaran Bachoo.

“It is now imperative to apply Horus (iodosulfuron + mesosulfuron) plus a residual before the frosts arrive and the blackgrass stops growing actively in the wheat fields.”

But in barley, the options were rather limited and the results could be disappointing. Use either a material based on chlorotoluron, variety permitting, or Axial (penoxaden). “Be wary in the soft barley crops and avoid frosty conditions to minimise lasting damage,” said Mr Bachoo.

In Scotland, the potato harvest was finally finished although a few large growers are still struggling and there a number of fields that can not be lifted. While growers were now preoccupied with preserving quality in store and grading seed for export, SAC’s Matthew Smallwood said it was worth planning for next year.

“This season has shown that marginal land is marginal for a reason and this is also true for virgin land. While combinable crop growers reduce costs and increase profitability by increasing scale, most potato growers need to reduce the number of marginal fields they plant instead.”

And where a field had a past history or is high risk for powdery scab, then there was only so much variety, and in the case of seed growers fluazinam, can do to reduce it.

• Read what other growers are saying on our forums