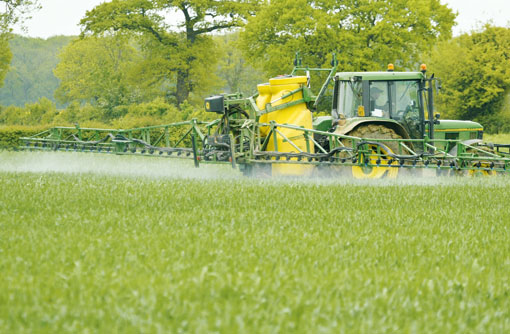 Wheat growers need to count the days and watch the weather this month as rain could bring a flare up of septoria ahead of the key flag leaf fungicide spray.

Advisers say the timing between fungicide treatments should not be stretched too much as a sudden change in weather can easily bring in wet-weather diseases like septoria.

Growers who have applied T1 fungicides earlier this month are advised not to delay their next spray as septoria is the biggest yield-threatened disease to wheat crops.

“Once growers have applied T1 sprays then they should start counting the days and not leave the next spray much more than three weeks away,” ADAS plant pathologist Peter Gladders tells Farmers Weekly.

He adds T1 sprays will treat leaves 3 and 4, but with leaf 2 and the flag leaf still to emerge then growers may be taking a risk with disease if they leave a four week or more gap until T2 sprays.

“Two wet days together can lead to septoria spreading and this disease is the biggest risk for wheat crops,” says Dr Gladders.

He suggests using a SDHI fungicide, the most effective products against septoria, together with a triazole and the option of adding in chorothalonil as a protective product.

There is disease on the lower dying leaves of many crops so if the weather does turns wet then septoria could be a threat, while cool conditions could encourage yellow rust and a warm spell herald brown rust.

Last year’s dry early spring was followed by rain in May and T2 and later T3 fungicides sprays were seen to be really beneficial, Ms Lilly adds.

She suggest a SDHI/triazole approach at T2, and adds that chorothalonil is less important if timely T0 and T1 treatments have been made.

However, many growers have cut back on early sprays as they expect backward and thin crops unlikely to give bumper yields.

“If growers have undercooked T1 fungicides, then a wet spell could see disease come back to bit them,” says Nick Myers, national agronomy manager at adviser ProCam.

He adds it is important to maintain fungicide programmes as even normal rainfall in May can encourage septoria to move up the plant from the lower leaves.