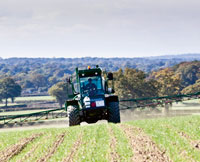 Where disease pressure was high, yield responses of up to 1t/ha had been seen from SDHI fungicides, he said.

But unlike strobilurin fungicides when they were first launched around a decade ago, yield responses from year-to-year have not proved consistent, he noted.

It seemed to depend on the weather, he explained. In 2007/8, when the spring and early summer weather was warm and wet, conducive to high disease pressure, high responses were seen.

But in the following two years, which were much drier, yield responses dropped to around 0.5t/ha in 2008/9, and ranged from nothing to 0.3t/ha over the standard fungicide programme last season, he said.

“I can only assume it is down to the low disease pressure. Wherever we did get higher disease pressure last year the responses were larger, but those sites were few and far between.”

SDHI fungicides, like strobilurins, had also demonstrated phytotonic plant effects, such as increased greening and stress resistance, he noted. “There is no doubt there are effects over and above disease control, but what their value is to yield is not clear.

“We could see SDHI-treated plots hanging onto green foliage better when the drought hit last season, but we didn’t really see that come out in the yields. We still have a lot to learn.”

It had left advisers in a tricky situation about how to position the products in the coming season, he admitted. “In a low disease year, we’re not really sure where to use them. We’ll probably try to position them in places where we know have a disease risk and more likely to get good responses.”

Four new SDHI active ingredients have or are due to be registered in the next few years, he said during his presentation. “All of them are broad spectrum in cereals, and have potential in oilseed rape, sugar beet, vegetable and fruit crops too.

“They are high persistent, which gives the opportunity for follow up spray timings to be more flexible, and some of them appear to have a degree of curative activity.”

That added up to a package that should be significant, not least in protecting and helping diversify a fungicide portfolio that was heavily reliant on triazole and strobilurin fungicides currently, he said.