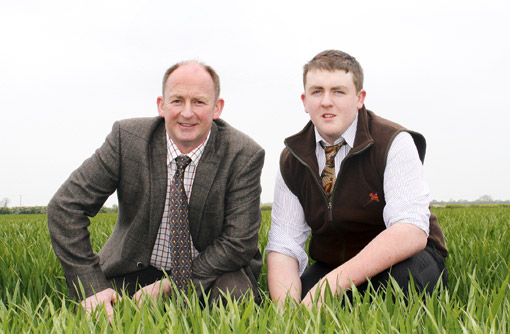 Milling wheats have an almost permanent place on Fulbeck Farms in Lincolnshire, where they have always held their own.

Grower Andrew Ownsworth believes the diversity of soil types found on the farm lend themselves better to milling wheats than feed varieties, producing equivalent yields but bringing in a valuable premium as well.

“On our lighter land, it’s a job to get any wheat to yield, especially if we don’t get the rainfall,” he says. “So we can take a small loss of premium, if conditions go against us, and still come out better off.”

Farming 540ha of winter wheat, oilseed rape and spring barley, as well as a small area of vines and two livestock enterprises, spread across two farms, Mr Ownsworth adds value to all the enterprises wherever possible.

As a result, he cold presses some of the oilseed rape to produce bottled oil, finishes bacon pigs for Sainsbury’s under the Freedom Foods label, breeds pedigree Charolais cattle and has just started to produce red and white wine.

The milling wheat is no exception to this business strategy. For the past nine years, he has grown for Warburtons, through Openfield, choosing the varieties that have been tested by both companies and deemed suitable for the baking process.

“We grew Hereward for quite a few years, only stopping in 2011, and supplemented it with some Solstice,” he says. “We’d been looking for a Hereward replacement for a while, but were concerned about the marketability of others.”

So the news Warburtons was offering contracts on two new Limagrain varieties, Crusoe and Edgar, was just what he wanted.

“I admit to jumping in with both feet,” he continues. “Both varieties have got the weight of Warburtons behind them, as well as the Openfield expertise, so I had confidence in them.”

But Solstice has kept its place too, and will continue at Fulbeck Farms for the foreseeable future.

While Crusoe was added to the Group 1 category of the HGCA Recommended List last year, rubber stamping his decision, German-bred Edgar hasn’t been entered into the RL system and is more of an unknown, acknowledges Mr Ownsworth.

“It’s very tall, but appears to be stiff strawed, and it has good septoria resistance. Other features of it are better drought tolerance and eyespot resistance, I’m told, which make it an interesting second wheat choice for us.”

The Crusoe was drilled on 30 September and the Edgar on 2 October, both going into dry conditions. The first wheats were treated with Redigo and the second wheats with Beret Gold and Latitude, with seed rates of 175-190kg/ha being used.

“I will be reviewing seed rates at harvest time,” he says. “Last autumn’s dry conditions probably helped us out.”

A robust fungicide programme has been used across all the wheats, from T0 right through to T3, with all varieties being treated the same, regardless of their agronomic characteristics. “That may change once we’ve seen how they’ve coped with this extreme season. Crusoe does have better disease resistance than Solstice.”

Nitrogen is usually applied in three splits, with the last application going on at ear emergence in most seasons. The Warburtons requirement is for 12.5% protein, which is lower than other bread-making specifications.

A new 2,500t grain store, together with a continuous flow drier, allows him to harvest wheat at every opportunity. “Our aim is combine it at 18-19% moisture, when it is just ripe.”

Marketing has been done through Openfield pools in the past, but last year Mr Ownsworth decided to take the spot price, rather than the average. “I’m planning to do the same this year, but I do have the choice with Openfield.”

The Warburtons contract can be for either two or four years and the premium is based on a £20minimum/£40maximum. “I need a premium of at least £20/t to make it work, which is guaranteed with this contract.”