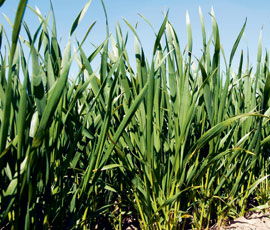 When Robinson Crusoe was cast away on his tropical island he would have probably found good use for the breadmaking wheat that is his namesake, to aid his survival until rescue.

The promising eponymous milling variety, named after Daniel Defoe’s hero, could now be delighting growers and breadmakers alike and be the future foundation of the British loaf.

From deserted isle to Kent’s sparsely populated Romney Marsh, one bread wheat grower is planning for the variety to take a big slice of his farm this autumn.

Clive Wreathall (below) has taken to Crusoe quicker than the hapless sailor to his island home, impressed by the wheat’s quality, disease resistance and ready milling market.

Despite a dismal harvest nationwide, he combined a bumper crop of Crusoe last summer, which produced the right dough for one of Britain’s biggest breadmakers, Warburtons. 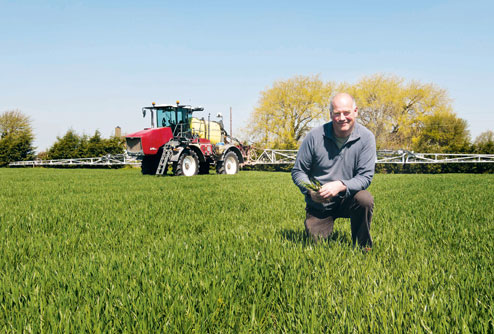 The new variety outperformed other well established bread wheats such as Solstice and Cordiale with a yield of 11.2t/ha, signalling that it could be a variety with a future on his farm.

“On present form, Crusoe looks like being a successor to Solstice and looks like the kind of wheat we want to grow,” he says.

On his rich, silty moisture-retentive soils, the variety turned in a promising protein of 14%, specific weight of 80-82kg/hl and a Hagberg to meet Warburtons’ 225 minimum.

Mr Wreathall is growing 40ha of Crusoe this season after a similar amount last year and is set for more than 200ha this autumn, which will account for two-thirds of his first wheats.

Mr Wreathall summarises the variety’s benefits as producing a quality crop in a tough year, good septoria disease resistance, and a stiff easy to combine straw.

He easily met the Warburtons’ milling criteria of 12.5% protein, 76kg/hl specific weight and the 225 Hagberg, and sold his crop at Christmas for £244/t, a then £30/t premium over feed wheat.

The backbone of the rotation on his 1,000ha Chapel Farm, Ivychurch, southwest Kent, is breadmaking wheats, as he has never been able to get feed wheats to perform well.

“If you cannot grow big crops of bread wheats on our moisture- retentive soil in the southeast of England, then where can you grow them?” is his philosophy.

Crusoe’s breeder, the French co-operative Limagrain, has been working with Warburtons and seed supplier Openfield from an early stage to establish the variety’s breadmaking credentials.

Wheat breeder Ron Granger says the variety offers higher yields, together with better protein and disease resistance compared with Limagrain’s other breadmaker Solstice, which has been around for a decade.

Openfield, the farmer-owned group, is offering Crusoe on a Warburtons’ milling contract, along with Solstice, Hereward and Edgar this autumn, together with agronomic advice on the varieties.

Tudor Dawkins, Openfield’s technical manager for Warburtons’ growers, says the variety can be grown as a first or second wheat with a yield and protein content ahead of Solstice.

Its disease resistance is especially strong against yellow rust and mildew, while it has the highest resistance on the HGCA Recommended List with a score of 7, compared with a 5 for Solstice and Gallant, Dr Dawkins adds.

The variety first came onto the HGCA Recommended List for drilling in autumn 2012, and this autumn there should be plenty of seed available.

Mr Wreathall believes he could cut his nitrogen rate and possible fungicide cost after growing the variety successfully for one season. 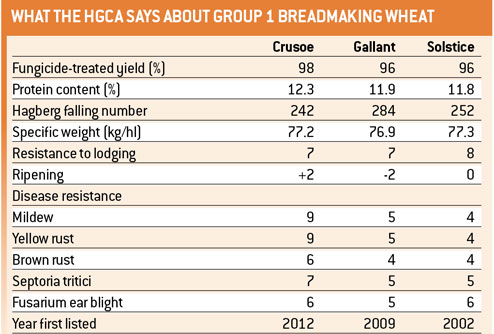 Milling wheat contracts typically don’t pay for protein above the stated requirement, so after achieving 14% he thinks he may be able to cut back on his 260kg/ha three-way split of nitrogen and still meet Warburtons’ need for 12.5%.

“There was a huge visible difference between Crusoe and Solstice on the level of septoria, but the biggest question is will it eventually breakdown,” he says.

Mr Wreathall follows a comprehensive four-spray fungicide policy through the spring and looks to cover for any disease that might strike his crop.

“If you aim to get £2,500/ha from your crops then you can afford to use a robust fungicide regime,” he says.

His plan is to ease Solstice out as a first wheat with two-thirds Crusoe and one-third Solstice planned for this autumn, while he will also try out Crusoe as a second wheat.

He grows about 650ha of wheat in a rotation of two wheats followed by a break of oilseed rape, two further wheats then a further break of dried peas.

Cordiale has proved to be a fail-safe second wheat, giving him “bomb-proof” quality, but if Crusoe gives him consistent quality then he will try the product as a second wheat.

Crusoe was brought in as a replacement to Hereward, but now could be the major wheat on his farm if it can give him the Holy Grail for wheat growers – consistent quality of bread.

“Crusoe looks like being the next generation after Solstice for the next five years or so,” he says.