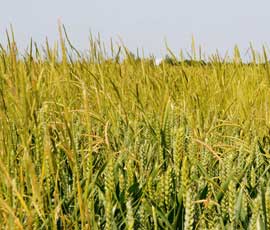 A combination of cultivations and chemicals is needed to control blackgrass which has rapidly becoming the arable growers’ number one weed problem.

He says a 97% level of control is needed of this troublesome weed just to prevent infestations getting worse due to the weeds left behind spreading rapidly.

Some growers are now spending over £100/ha on herbicides to control blackgrass, which has spread across most of Britain due to the prevalence of autumn-sown crops.

“Non-chemical methods have to come to centre stage as clearly the reliance on herbicides is unsustainable because of resistance,” Dr Moss says.

Blackgrass is essentially an autumn-germinating weed so the trend to early drilling and reliance on chemicals is making the weed problem worse and an integrated approach is needed, he adds.

“There are no other solutions than to use cultivations more for blackgrass control, as with increased resistance the current system is untenable,” he says.

With no new herbicides likely in the pipeline and as some existing ones may be withdrawn for regulatory reasons the focus on non-chemical methods is clear.

The inclusion of a spring-sown crop is likely to be the most beneficial single element in blackgrass control as it gives more time for cultivations, Dr Moss say.

The forced move to spring cropping this season because of poor weather hitting autumn drilling should help weed control but this needs to be continued. Spring barley is especially competitive and can help suppress blackgrass.

“The swing to spring cropping should have helped but one year will not be enough, and growers need to pursue this approach for the long term,” he says.

Dr Moss acknowledges that cultivation techniques might not be easy to implement across the farm, but argues that growers should look at these methods for their worst-infested fields.

One piece of good news is that the current hot weather should lead to low dormancy of blackgrass seed and if there is good moisture in the soil after harvest this could lead to a good germination of the weed.

This likely high germination could give growers a better chance of control by cultivation or by chemical means rather than having to deal with high dormancy seeds when weeds can germinate over a long period.

He points out that shallow non-inversion tillage systems tend to favour blackgrass, as freshly-shed seeds are retained near the soil surface so plants can readily emerge.

These systems can be useful where little or no seed is shed in the crop just harvested, and shallow rooting blackgrass can be more easily controlled by residual herbicides.

But failure to control blackgrass effectively in these systems can result in a much more rapid increase in infestations that can occur compared with ploughing.

Dr Moss has assessed the major methods of blackgrass control that can be achieved by non-chemical methods over some 50 field trials.

About 80% of blackgrass emergence occurs in the autumn, so spring cropping offers time for the young weeds to be controlled by cultivations or by glyphosate herbicide treatment.

Dr Moss says spring-sown crops tend to be much less affected by blackgrass and have given consistently good results for controlling weed infestation in field trials.

Spring barley is about twice as competitive as spring wheat in terms of reducing blackgrass, he adds.

This spring option is not easy for those on heavy soils where establishing crops early in the year can be difficult, and also herbicide choice can be more limited for spring crops.

Burying freshly-shed seed to a depth of more than 50mm from which seedlings are unlikely to emerge can give good control, with rotational ploughing advised every 3-6 years.

Blackgrass seeds are relatively non-persistent in the seed bank, so usually few old buried seeds are brought back to the surface when rotational ploughing is undertaken.

The key to rotational ploughing is to achieve a good level of soil inversion so all the surface seeds are turned over and buried.

Pushing back the drilling date for autumn-sown cereals has two clear benefits for control of blackgrass population in the autumn.

First, the delay allows more weed seedlings to emerge and be controlled with cultivations or glyphosate before sowing.

High winter wheat population of over 300 plants/sq m are more competitive than low ones of 100 plants/sq m, but excessively high seed rates can increase the risk of lodging later in the season.

Strongly growing and so more competitive varieties can also give some level of weed control.

A grass ley of two-to-three years is seen as a very good option for blackgrass control but a one-year fallow or grass ley is not long enough to reduce weed levels. After a two-year ley, less than 10% of seeds are likely to remain.

“A one-year ley is not enough. Two years is a lot better and three years is even better,” Dr Moss says.

The key to using grass ley breaks is to allow sufficient time to elapse between cultivating and sowing the next crop to allow the destruction of blackgrass seedling emerging from residual seeds.