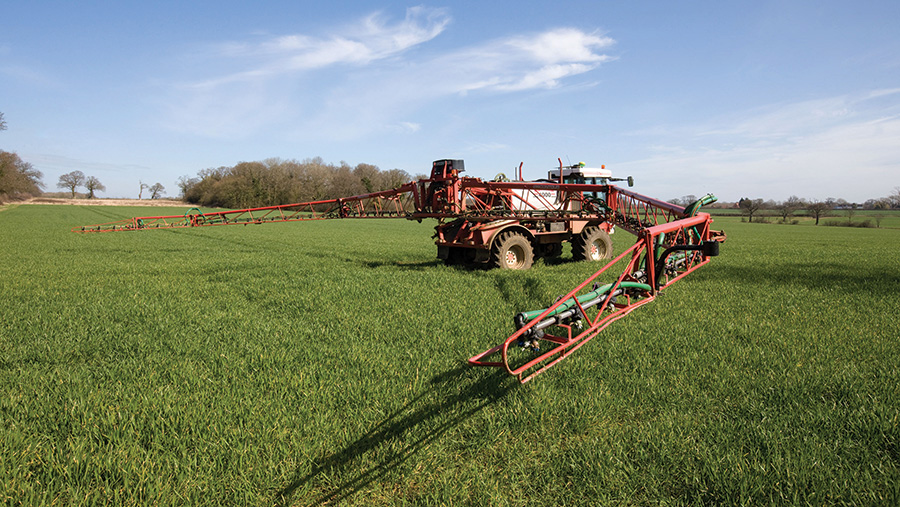 Cereal growers can save as much as £50/ha on fungicides by growing a more disease resistant variety and amending their spray programmes accordingly.

A total spend of about £80/ha across a four spray regime could be enough on varieties with higher disease ratings and good untreated yields, suggests Jock Willmott, agronomist and partner with Strutt & Parker.

However, susceptible wheat varieties could need a five spray programme costing almost £130/ha to achieve the same acceptable levels of disease control, especially where they already have a high disease loading, he adds.

“The start of the season can be very different to the end of it,” he points out. “Of course there are times when that extra £50/ha is worth it, but there are also times when it isn’t.”

He acknowledges that pathogens are evolving and that some seasons dictate the need to move quickly to safeguard yields.

“But that doesn’t mean that there isn’t scope for some to spend less overall.

“It’s about the most appropriate deployment of rate and product, which is always difficult to judge, rather than blanket coverage.”

Mr Willmott believes there is a tendency to overinsure when it comes to disease control.  “At better wheat prices, it was easier to afford to do more on responsive varieties, as spending more than £100/ha on fungicides was generally required to keep them clean.

“But the current grain price makes a big spend on less responsive varieties more questionable. Have the confidence to treat these varieties a bit differently.”

Fortunately, no-one is likely to lose money, regardless of their approach, he continues.

“All varieties give a response to fungicides, but it can get very tight in some circumstances.

“If you take Crusoe as a good example of a more resistant type, it has given yield responses ranging from 0.69t/ha to 2.93t/ha in the past three years.

“So if 2016 turns out to be a low response season, the economics could get very close.”

Crops being grown in drier areas where the septoria threat is lower offer the most flexibility, he continues.

“There are bigger issues with underdosing than overdosing, but this is less significant on the newer, more resistant varieties.

“They just don’t always give the same responses to fungicides.”

Savings are made at most of the spray timings, either by using less fungicide or by product substitution, with one less application being made.

“The most obvious differences with a resistant variety are the use of just one SDHI in the programme, rather than two, and not needing to use a T1.5 spray,” highlights Mr Willmott.

Other changes include the use of straight chlorothalonil at T0, a lighter touch with the SDHI at T2 and reduced inputs at T3, he notes.

“Despite the programme differences, the principles behind them are the same,” he notes.

“The interval between spray timings has to be around three to four weeks, so that there aren’t any unprotected gaps for disease to establish.

“We aren’t taking any unnecessary risks.”

Agronomic merit and untreated yield are being used by the AHDB’s Recommended List team to identify the more resilient varieties.

While agronomic merit takes account of resistance to all diseases and standing power, it also considers the relative importance of each disease – with septoria being higher risk.

This information is then added to the untreated yield data, to show the risk of yield loss and to identify the varieties most likely to perform well under variable conditions.

On the 2016-17 Recommended List (RL) are seven winter wheat varieties with an untreated yield of 90% of the controls or above – Illustrious, Siskin, Spyder, Belgrade, Graham, Crispin and Costello.

All seven gave a response of just over 1t/ha to the “belt and braces” fungicide regime used in the RL trials.