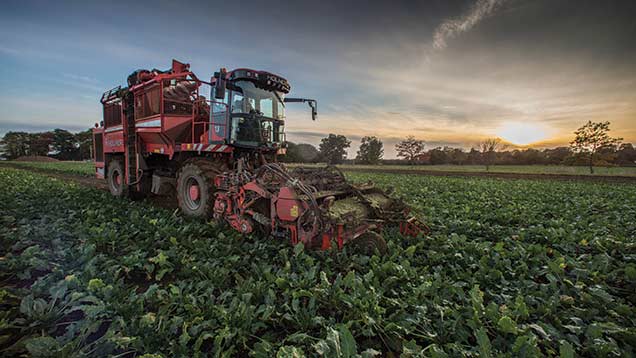 The best sugar beet harvest operators can lift up to 9.5t/ha more crop from the ground by paying careful attention to ground conditions and the state harvested beet is in and adjusting machinery accordingly.

Figures from the British Beet Research Organisation (BBRO) show that the best operators typically leave 0.5-1t/ha in the field, while the worst can be nearer 8-10t/ha. Average losses are 2.3-2.5t/ha, equivalent to about 3-4% on a 70t/ha crop.

Inevitably, there is a compromise between “acceptable” losses and the need to lift crops in what can be difficult conditions, but the (BBRO) says the considerable progress has been made in the last two decades.

“Average losses were 9% 20 years ago, so the industry has come a long way,” says the BBRO’s Colin Walters. “Around 85-90% of the crop is now lifted by professional contractors using a fleet of machines that is in good order.”

But there is potential for improvement, especially against “hidden losses” through crop bruising and damage, he says.

It is one of the main reasons the BBRO increased its recommended target established population from 80,000plants/ha to 100,000 plants/ha.

Beet can readily compensate for gaps and while a crop with 80,000 plants/ha may produce a similar biological yield to a crop with 100,000 plants, Mr Walters says yield recovery is greater from a uniform higher plant population.

As a general guide, surface losses equate to around one-third of total losses, with two-thirds below ground in the form of broken roots, says Mr Walters.

Checking for pieces of root or whole beet on the surface is an easy way to identify problems that are often easily fixed, says independent consultant Robin Limb.

“It may well be possible to save the cost of harvesting the crop with attention to detail.”

A lot of white chips of beet over the field, for example, can suggest turbines are too fast, whereas if there is obvious evidence of beet or whole crowns, more significant changes or repairs may be needed.

“It’s always difficult to find a balance between cleaning beet and leaving enough soil to avoid bruising or breaking them, especially on heavy land or wet conditions, but beet harvesting is not about getting over the ground as fast as you can.”

More than one or two small beet over an area of six rows by 20m means some form of harvester adjustment is required, says Mr Walters.

“Beet often lie in the same row, indicating a turbine gate has slipped or broken, allowing beet to ‘leak’ out.”

The adoption of a fixed crown tare system has put focus on whole beet recovery and the level of in-field crowning to maximise returns, he continues.

Optimum topping should see every plant defoliated, with crown and root left fully intact, he says.

There is a tendency to top harder to avoid any potential regrowth in the clamp, but Mr Walters says research shows a very small amount of green material left on beet should not be a concern, as this will die and be scrubbed off by the cleaner/loader.

The main exception to this is beet harvested in frozen conditions, where any frost damage should be topped out, he notes.

Yield loss from root breakage can be significantly more than surface losses and much harder to assess, as broken pieces get covered with soil or crop debris and wheeled into the ground.

BBRO recommends assessing breakage at the clamp by measuring the diameter of the breakage point for 100 samples.

Ideally it should be no more than 2cm diameter, although harvester assessments show the top 20% have at least 90% of roots within this level, with the remainder no greater than 4cm diameter break.

Lincolnshire contractor John Ulyatt says it is worth checking rows after the harvester has been through by scraping back soil to look for signs of broken tap roots. “It’s not a scientific process; a lot comes down to experience.”

Minimising physical damage to beet from bruising, cracking and defoliation is crucial to avoid heavy losses of sugar through respiration during storage.

Sugar losses typically range between 0.09 and 0.13% per day of total sugar volume in a well-constructed clamp, and will be highest where more root damage has occurred, says Mr Walters.

Sugar can be leached away from roots and damaged beet are also at risk of moulds and rots.

In addition to optimising harvester settings, the BBRO advises to: