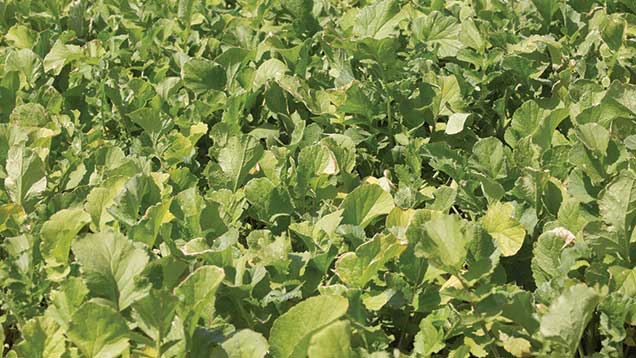 Collaboration between scientists and a top UK arable farm is identifying strategies to reduce the environmental impact of arable farming without slashing farm profits.

Crop production accounts for about 30% of the UK’s agricultural land and is a major source of diffuse pollution that threatens the quality of rivers, lakes and other bodies of water.

The pollution is predominantly nutrients such as phosphate and nitrate, along with soil sediment that can smother the life out of aquatic ecosystems and increase flooding risk.

An ongoing Defra-funded project in north Norfolk is aiming to uncover measures to help farmers reduce such pollution without a negative economic impact on their business.

Run by the University of East Anglia (UEA) in the Wensum Demonstration Test catchment, researchers are working closely with a number of local arable farms.

Project co-leader Andrew Lovett says that if you can get mitigation measures to work within the Wensum catchment, it will be readily transferred into many other arable areas across England.

“The Wensum really typifies the problems we face over a large area and we need to find a balance between changing practices for the good of the environment, but also allowing the business to be sustainable too,” he adds.

The River Wensum catchment is dominated by intensive arable cropping, with about 60% of the area cropped with a mixture of combinable and root crops, so risk of diffuse pollution from sediment and nutrients such as nitrate and phosphate is high.

Crop production manager James Beamish was sceptical when the farm got involved with the project back in 2010, but it has enabled him to see first hand the effect of their practices on the surrounding landscape and how they might contribute to pollution mitigation measures.

“The research has had a very positive impact on both reducing any pollution and improving management practices on the farm itself,” says Mr Beamish.

Researchers are using nine fields across 143ha to test measures designed to reduce diffuse pollution into a watercourse through the middle of the block.

These have included cover crops and reduced cultivations to cut the loss of nitrate, phosphate and sediment, with assessments of their cost impact.

This part of the project has been in collaboration with distributor Frontier and machinery manufacturer Vaderstad and began in summer 2013.

High-tech monitoring systems sampling nutrient and sediment levels in the stream every 30min can attribute any spikes to rainfall events, run-off or management inputs on the land.

This runs alongside sampling from porous pots at 90cm depth to examine what is lost down the soil profile, and also the water flowing from field drains.

Mr Beamish established a cover crop of oilseed radish immediately after harvest 2013 in seven of the nine fields, with five receiving a starter fertiliser.

Radish was chosen for its large, soil-conditioning taproot, high retention of nutrients and ability to suppress beet cyst nematode.

The remaining two fields in the block were ploughed and left over-winter as a control.

Prof Lovett says that he was expecting some effect from the cover crop being established over winter, but nothing like the results they recorded.

In the cover-cropped fields, porous pots recorded 0.25-1.37mg nitrate/litre, compared with 11 and 17.5mg nitrate/litre under the two ploughed fields. Concentrations in drain flow were also much lower from fields with cover crops.

“There was a striking difference, with the cover crop stopping nitrogen being lost by almost eliminating leaching and mopping up nutrients left in the soil from the previous year,” he says.

Hydrologist at the UEA and fellow project leader Kevin Hiscock says these effects have been seen in small plot trials before, but this has demonstrated the effect on a farm scale.

“Also, the nitrogen in the cover-crop canopy from tissue tests was in the region of 70kg/ha, so the farm sees that as a very useful ‘green manure’,” he adds.

The results show cover crops may play a vital role in not only preventing environmental harm, but also help farmers to make better use of applied fertiliser.

The team also observed no difference in N take-up where starter fertiliser was used and cover crops also boosted soil invertebrates such as earthworms.

However, Mr Beamish hit problems later on when it came to cultivate ahead of the following spring bean crop.

“I hoped we’d have soil to die for after the radish, but the mat of leaves held too much moisture in, so you might be taking a risk with it, especially in a wet spring.

“There was also much more pea and bean weevil damage in the following spring bean crop, too,” he adds.

An alternative mix of vetch, rye and black oats has been tried elsewhere on the farm and produced more workable topsoil, and Prof Lovett points out that further thought needs to be given to the role of cover crops.

“They clearly have a role to play in catching nitrates, but we need to be careful which species, where and when,” he adds.

In two adjacent fields outside the 143ha block, the farm established crops with a “no-frills” approach of over-winter stubble followed by a disc cultivator then drill for cost comparison.

It is believed reduced tillage can improve soil biology, increase infiltration and, therefore, decrease run-off, but Prof Hiscock says the project will need much more data to draw any conclusions.

“We will have to gather five years’ data to see any clear trend, as some benefits just aren’t short-term,” he adds.

Mr Beamish says that he would never had considered a no-till approach such as the Seed Hawk before getting involved in the project and he will look to review future cultivation practices as a result.

“Slugs were more of a problem in the wheat after the spring beans this year, as the crop debris created the perfect environment for them, so I wouldn’t go the whole hog and buy a direct drill.

“But it is making me think whether we are cultivating too much and if we need to cultivate as deep as we do,” he notes.

Margins from the spring bean crop didn’t differ significantly from the various cultivation systems – including the fields that had an extra pass to establish the cover crop in block L and P (see table below).

Prof Lovett says seeing these yield and financial implications is one of the most powerful messages that the project is providing and something that farmers can relate to.

“There was no extra cost to using the mitigation measures and the project may later conclude that growers can use less fuel, less fertiliser, less steel and achieve the same yields,” adds Prof Lovett.

Clamping down on sediment loss

Phosphate (P) is intrinsically linked with sediment loss as the nutrient is bonded tightly to soil particles, so when sediment is deposited into water, so is the P.

Mr Beamish says he is now much more aware of this and is considering how they might mitigate soil getting washed away into the watercourses running through the estate.

At present, the biggest source of sediment making it into the Wensum catchment from Salle Farms is from soil deposited on the roads when harvesting sugar beet in the winter.

“It’s difficult to prevent with a crop like sugar beet in the rotation, but we are thinking about when we lift and reducing traffic on the road with muddy tyres.

“We can do that by building more beet clamps or extending the ones we have to minimise the need for trailers to run on the road to empty their load,” he explains.

Other measures Mr Beamish is considering for phosphate pollution mitigation is placing P fertiliser with seed, to give the crop just what it needs at the right time.

“We use Limex [high in P], chicken manure and top up with bagged P, too, but do we need to keep indices at 2-3?

“The project is making us think about how much and when we apply out fertiliser and we’ve already moved to three smaller splits of N in wheat rather than two to minimise losses,” he explains.