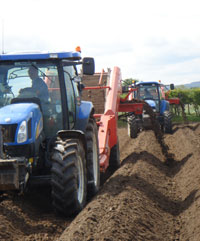 Potato growers should consider cutting their acreage by 10% in 2009, to avoid prevent excess tonnage depressing values, says one business adviser.

In contrast to 2008, where net margins after rent and finance looked “reasonable” at just under £200/acre, forecasts for 2009 did not make for happy reading, his colleague Rob Hughes said.

Substantial rises in variable costs, driven by increases in fertiliser costs of 220%, plus a rise in overheads would reduce the crop’s net margin by over £200/acre, leading to a net loss of £28/acre in 2009 for a stored, processing crop, he said.

It left the potato sector facing similar problems to sugar beet growers earlier in the summer, said Mr Whitaker. “We’re a bit concerned. Are we going to continue producing crops for very little return. They are pretty derisory given the amount of money you [farmers] are investing, and it’s not going to work for too long.”

Controlling the supply of potatoes, along with providing growers detailed market information, was the basis of how farmers in the USA had turned falling prices back into profitable production, Buzz Shahan of United Potato Growers of America told the conference.

The organisation, started in late 2004 by a group of Idaho potato growers, now had nine member co-ops across USA controlling about 80% of the potato area. A similar organisation existed in Canada.

By obtaining detailed market supply-and-demand information for farmers, the organisation is able to produce recommendations for how much area growers should produce each season. That helped produce a supply/demand balance that kept production profitable, he said.

In the first year UPGA suggested cutting areas by 10%, with extra cuts of 5% in the following two years. In response the grower return index increased in Idaho, for example, from less than $3/cwt (£60/t) to over $6/cwt (£120/t) for fresh potatoes, Mr Shahan said.