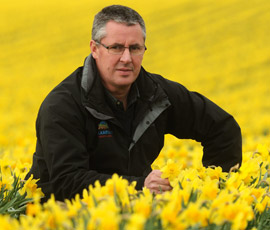 A daffodil grower in Scotland has blamed a shortage of labour for the potential loss of 15 million flowers which have bloomed early.

Mild weather at the Grampian Growers’ farm, in Montrose, Angus, meant the crop was ready 10 days’ earlier than usual.

That coincided with a two-week delay in the growing season in England after a severe cold snap during February and both the English and Scottish crops have bloomed at the same time.

Company director Mark Clark explained that the coincidence had been a double blow.

With all the flowers coming at once, the price has tumbled, Mr Clark said in an interview with the Daily Mail newspaper.

“It also means we don’t have any pickers, because they’re all still down in Cornwall and Lincolnshire,” he added.

Mr Clark reckoned that losses could amount to £300,000 unless he can find enough workers to pick the crop.

“We’ve lost about 25% of our volume because of the weather. That’s 1.5 million of our bunches, each containing 10 blooms, completely wiped out.

In an effort to boost his picking team from 100 to the 500 pickers he needs, Mr Clark has carried out a local advertising campaign.

But, so far few people have come forward who are willing to take on the work.

Mr Clark now fears that prices could fall to such a low level that even with enough workers the crop will not be worth picking.