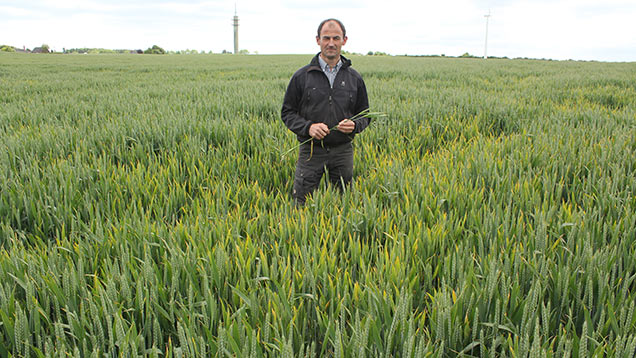 Cereal growers across Demark have had crops clobbered this season by the worst barley yellow dwarf virus (BYDV) epidemic in a decade.

Aphids are usually halted by falling autumn temperatures, but this season was country’s second mildest autumn since 1874 and BYDV-carrying grain aphids had ideal conditions to move into cereal crops to colonise and spread the disease.

Driving through the eastern region of the Jutland peninsula, the distinct yellow and stunted patches typical of the virus infection are clearly evident in winter wheat and winter barley crops.

Michel Levy, who farms 700ha with his brother Johan at Juelsminde, south of Horsens, has seen his wheat hit hard, but tells Farmers Weekly he’s been quite lucky compared with some neighbours, who have had to plough in and destroy entire fields.

He had some wheat drilled on 4 September, but without easy access to the seed treatment Deter (clothianidin) as we do in the UK; the crop was left exposed at its most vulnerable stage.

“The temperature in October was very high and we treated the crops once with foliar insecticide Nexide (gamma-cyhalothrin), but after that it was too wet to spray again.

“We sometimes see aphids, but I’ve never seen damage this bad. If it happens again, we would spray more, even if it means making (deep) tracks with the sprayer,” explains Mr Levy.

The combination of warm weather and early drilling represents the highest risk for BYDV infection and a quirk in Denmark’s greening rules means cereals sown before 7 September can be recorded as a cover crop.

This is the reason why Mr Levy and many other Danish growers have planted so early and seed treatment Deter could give growers protection, but Danes cannot treat their seed with the product.

Instead, the only option is to import seed treated with the neonicotinoid dressing from Germany – as it’s not illegal to plant Deter-treated seed – but it’s an expensive option at about three times the price.

Bayer CropScience produce the seed treatment and their Nordic marketing manager Klaus Heltbech says it is unlikely the product will ever be approved, with Danish pesticide regulation notoriously tight.

“Aphid attacks like in this season are only rare events, perhaps once in 10 or 15 years, so it is will be difficult to build a case for approval,” he says.

Mr Levy noticed that crops drilled just one-week later were far less effected by the BYDV infection, showing the cultural controls such as later drilling can be useful in high-risk situations.

In the UK there have been some mild, open autumns in recent years and the Danish situation highlights the importance of seed treatments to protect against the spread of the devastating virus.

Here, about 40% of winter wheat and winter barley crops are treated with Deter and south of the M4 where the risk is considered much higher, that would be closer to 100%.

He says treated seed-stewardship is crucial when using the insecticide dressing to ensure the product doesn’t come under the regulatory spotlight and remains a tool for BYDV protection in the future.

“One of the greatest threats to future seed treatment approvals is the perceived hazard to small birds and mammals,” says Mr Stacey.