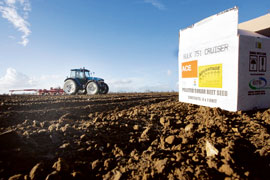 Having lost 2,500t of beet – one-third of his total production – in the disastrous 2010-11 campaign, Norfolk grower Jamie Symington admits last winter’s severe weather has had a considerable financial impact on his farming business.

But a lack of alternative break crop options means he is sticking with sugar beet for the time being, despite the better returns on offer from combinable crops and the lack of incentive to re-invest in beet growing.

“We could switch to oilseed rape,” he says. “But I’m reluctant to do that with potatoes in the rotation. Another alternative is second wheat, which offers us double the margin that sugar beet does at the moment.

“Once wheat is worth £150/t or more, sugar beet isn’t competitive. And that’s the situation we’re in this year. The pricing mechanism that the NFU agreed isn’t right for the current market.”

The fact that the world sugar price has more than doubled in the past 12 months hasn’t escaped his notice, nor has British Sugar’s ability to pay growers the minimum it can.

However, he doesn’t blame British Sugar for the winter problems, or for being able to negotiate a better deal than the NFU. “It’s a business, just like we are. Of course, [British Sugar] is going to pay as little as possible. The problem lies with the NFU, in my opinion.”

The beet that couldn’t be processed at L Symington Farms last winter had to be ploughed in and the fields have since been drilled with spring barley, he says.

“We wouldn’t normally grow spring barley, but it was the best we could do without disrupting the rotation any further. It’s on our lightest land as we’d saved those fields until last.”

Mr Symington is relieved he isn’t going to be penalised for failing to achieve last year’s quota. “And we will be refunded half our seed cost if we do make our quota this year. Our yield target is 75t/ha again.”

As drilling took place in good conditions the crop has established well and looks promising, he notes.

Receiving just £10 for 22 acres of beet was the final straw for F J Hipperson & Sons, who farm at Crownthorpe, near Wymondham in Norfolk.

The decision not to grow sugar beet again was made after the business was left with losses of around £20,000 following the rejection of loads by the Cantley factory due to the condition of the beet.


Our first fields were lifted and in the factory at the beginning of October,” recalls Mr Hipperson. “But I was advised not to lift the rest until British Sugar was ready for it. When it was lifted and hauled at the end of January, it was all rejected.”

Mr Hipperson, who has grown and hauled sugar beet for more than 30 years, can remember British Sugar’s previous advice of always having the beet lifted and on a concrete pad by Christmas, to avoid crop losses. Not only has he decided to stop growing sugar beet, he has also taken his lorry off the road.

He has drilled peas instead, growing them on contract for seed.

“The beet price of £23.60/t, which is less than we were previously being paid, doesn’t stack up compared to the alternatives now,” he says. “And we’re capable of getting 74t/ha of beet on this land.”

He is also unimpressed by the inconsistency of British Sugar’s guidance and communication. “Growers around here need to know why loads were accepted at one factory and not at another. There were also losses of as much as 3% of sugar overnight on some loads.”

Factory breakdowns and mechanical issues are another bugbear. “Loads are lost every year because of problems at the factory, but there’s no compensation.”

The pricing mechanism agreed by the NFU and British Sugar needs revising, he believes. “British Sugar is a monopoly buyer, so there are times when growers have to stand up to them. And we’re not doing that effectively enough.

“It’s time the levy was used to pay for professional negotiators.”