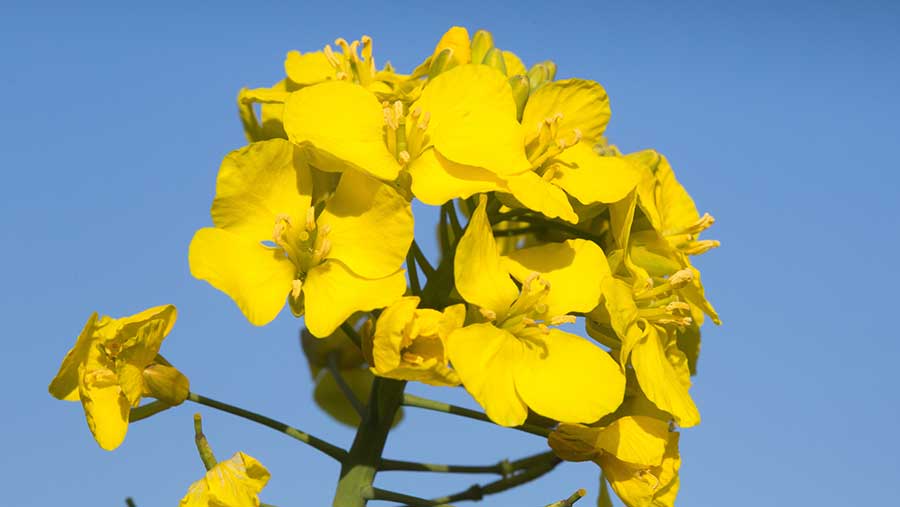 The UK oilseed rape area looks set to stabilise at just over 550,000ha next season, after annual year-on-year declines for the past four seasons.

A survey of grower intentions for next season reveals the decline, which saw the area shrink by more than 4% a year from 2012, may have bottomed out.

The stabilisation of the OSR area reflects the better prices, with continuing strong European demand for both rapeseed and rapemeal.

However, on an individual farm basis, 20% of growers signalled their intention to cut the amount they are growing next year compared with the 2016-17 season, which is being balanced by a similar number who intend to increase their planting.

The survey of 200 growers across the UK, conducted by Independent Business Resource (IBR) and Kleffman Group, also revealed many growers continue to have relatively tight rotations.

Nearly one one-quarter oilseed rape growers are still planting the valuable break crop in a one-in-three rotation or shorter.

Marion Self, a Suffolk agronomist with Prime Agriculture says this chimes with what’s happening in her area with a small number of growers growing the crop for the first time to allow use of alternative chemistry for blackgrass control.

However, other growers in the east of the county have given up growing the crop due to difficult establishment conditions in the past few seasons.

“A one-in-five [oilseed rape] rotation will be better than one-in-three, but one-in-three is still popular in this area,” she said.

She explained that shorter rotations are persisting because of a lack of an equally profitable alternative, and partly because many growers were steering clear of growing too much second wheat to limit the spread of blackgrass.

Yields lower in the East

IBR study organiser Roger Pratchett said: “There is, of course, plenty of scope for change before planting time,” explaining that conditions could change depending on how current crops perform and what conditions are like around planting.

The study also added fresh evidence that yields in central and eastern had been lower than the rest of the country.

The data revealed the average yield in these parts has been 3.32t/ha over the past three seasons compared with a nationwide average of 3.8t/ha.

Deryn Gilbey, marketing manager for hybrid oilseed rape breeders Dekalb said while currency fluctuations will have an impact on future UK prices, the rapeseed price relative to other crops was likely to hold steady thanks to other commodities being similarly affected.

This means that the crop’s position as the second most profitable crop, after a first winter wheat, was likely to remain unchanged.