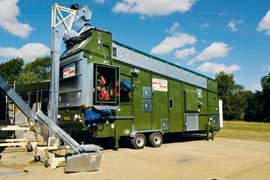 Add an axle, wheels and drawbar and pretty much anything can be made portable – except that when it comes to grain driers, bulk is something of an issue.

That is certainly true of the Double Flow continuous operation drier built by Alvan Blanch, which was conceived for static installation. But although the Wiltshire company has produced nominally portable versions of its drier in the past, thought has only recently been given to how it could be made truly mobile.

The impetus came from Hampshire contract farming business Scribeland, whose need for a high output drying system that could be used on client farms reflects a similar situation faced by similar businesses – as well as by farms acquiring land distant from the home farm.

With the help of agricultural engineering firm APECS, a list of potential modifications was put to Alvan Blanch that would make the drier more manageable in narrow country lanes.

Recognition of the potential for a properly portable drier led to the finished machine, which has a top cover produced from flexible material; fold-down upper sides to the drying chamber; and a removable intake hopper, all of which reduce overall height.

The result is a drier that needs a bit of preparation to move between sites, and with an intake hopper that must be transported separately. But with built-in handling equipment and a mobile fuel supply, the setting-up and breaking-down procedures are not particularly time-consuming.

And, once set up, says Andrew Blanch of the manufacturer, throughputs of up to 25t/hr can be achieved thanks to the high volume, low temperature drying system and continuous flow operation.

One of the earliest examples was put to work in the 2010 harvest by Peter Allen, who runs Bedforshire’s P&D Allen Farms with his father, Derek. Of the 1200ha or so they farm, just over half is their own; the rest is contract farmed.

“Where we’re contracting, most of the farms haven’t updated their drying systems,” Mr Allen explains. “We can now go on to those farms and both harvest and dry the grain on site.”

The Alvan Blanch unit was chosen for its throughput, compared with the performance of a mobile batch drier, and because its burners are fuelled by diesel, which is easily moved from site to site in a bowser, rather than gas.

The low temperature drying system is also attractive: Alvan Blanch reckons that in the right circumstances, up to 2% moisture can be removed without heat thanks to the prodigious airflow generated by the fans and the shallow drying bed. In its latest form, the drier is also reckoned to be more fuel efficient – by up to 15% compared with an earlier design.

As with the static version, grain is drawn down an inclined upper screen in a bed of adjustable depth by a chain and slat conveyor. At the end of this screen, the grain falls to a second screen below, inverting the bed for even drying in the process.

Half way along, the bottom screen becomes a cooling section, where the temperature of the grain is lowered prior to discharge.

All handling equipment – built by Devon’s Perry of Oakley – is built in to make the drier pretty much self-contained.

An auger-fed vertical chain and flight elevator fills the intake hopper where level sensors automatically regulate the supply. A second elevator at the discharge transfers grain to a trailer or send it into storage.

Having the ability to dry grain on contract-farmed properties, says Mr Allen, avoids harvesting delays, simplifies and reduces the cost of preparing grain for sale or storage, opens up more marketing opportunities.