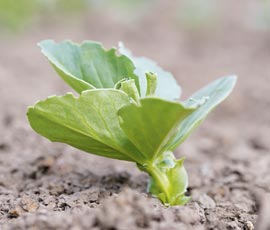 Very good gross margins are achievable with marrowfat peas and winter beans, as demand for both crops continues to outstrip supply, reports Peter Smith of Wherry and Sons.

Compared with oilseed rape, both peas and beans have lower growing costs and can be drilled later, he notes, without a detrimental effect on yield.

“Winter beans, in particular, have shown their versatility this year. Even crops drilled after Christmas are looking good.”

Work on using higher seed rates has also been beneficial, he adds. “The thicker crops tend to perform the best and they’re certainly likely to be the best ones we see in 2013.”

Concerns about the lack of genetic diversity in winter beans are being addressed by Wherry’s breeding programme, the only one of its kind in the UK.

“We’ve been bringing in new genetic germplasm,” confirms Mr Smith. “Our aim is to produce new varieties that will perform reliably, regardless of season.”

Marrowfat pea prices in the mid-£300s form the basis of next year’s contracts, he continued. “We need to contract forward as continuity of supply is so important with this niche crop.

“There’s tremendous demand for a quality product and it’s a crop that grows uniquely well in the UK.”

Rising consumer demand for oats offers an on-farm opportunity this autumn, as growers look at alternatives to oilseed rape.


“Oat-based breakfast cereals have been one of the big success stories for farming in recent years,” says Alan Meikle of Morning Foods. “And the oats used in these are sourced in the UK wherever possible.”


Wheat/rape rotations aren’t looking as attractive as they were this time last year, prompting producers to have a rethink, he points out. “At the same time, commodity prices for other crops have remained high, making them far more competitive than they used to be.”


Demand for oats is increasing all the time, he says. “We need more growers. Both winter and spring oats are used by the millers and there are some very high yielding varieties available now.”