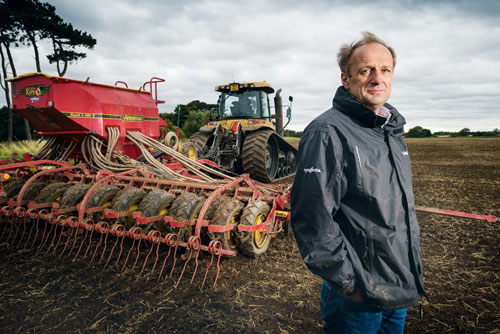 Good seed-to-soil contact has been the aim of our High 5 oilseed rape Barometer growers, as they put the foundations down for a 5t/ha crop. Louise Impey finds out more in the first of a new series

The conditions have been far more favourable for oilseed rape establishment this year than they were last year, points out Andrew Gloag.

Even so, the very late spring barley harvest, which wasn’t completed until 24 August, means that his oilseed rape plans are about a month behind.

“We seem to have been playing catch up for the past 18 months,” he says. “Fortunately, soil temperatures have remained high into September and our soil structure is much better than it was last autumn.”

Some 367ha of winter oilseed rape was drilled by the middle of September, which is less than Mr Gloag intended. “I had planned another 51ha following winter wheat, but the harvest delays meant that it was just too risky. “

Experience has taught him that control of seed depth is critical. “For this reason, we’ve moved away from a one-pass Sumo mounted seeder and gone back to using our 8m Vaderstad drill wherever possible. It allows the accurate placement of seed at depth and ensures good soil contact.”

Every other coulter is blocked off, so that the crop is drilled in 25cm rows. The seed rate for the chosen hybrid varieties was increased from 35 seeds/sq m to 50 seeds/sq m due to the later drilling date, with the seed having both Take-Off and either Modesto (beta-cyfluthrin + clothianidin) or Cruiser (fludioxonil + metalaxyl + thiamethoxam) dressings.

Hybrids dominate with DK Extrovert, DK Excellium and DK ExPower being grown – all chosen for their pod shatter gene.

“We’ve also started using a pod sealant for the past three to four years, as we had difficulties cutting rape in the past. And there’ve been no seed losses at all – whether that’s due to the variety, pod sealant or a mixture of both, we can’t be sure.”

Slug pellets and a pre-emergence Butisan treatment were applied. The pre-emergence herbicide was followed up with a contact graminicide, which in turn will be backed up by Kerb (propyzamide), in order to keep on top of blackgrass.

Normal practice is to apply two flusilazole-based autumn fungicides – the first coinciding with a boron application and the second timed to include the Kerb and some Nutriphite. “We aim to give the crop every bit of encouragement in the autumn.”

He is pleased with the even plant stand achieved to date but concerned that the crop is extremely backwards. “We are reliant on another couple of weeks of favourable weather to help it along.” 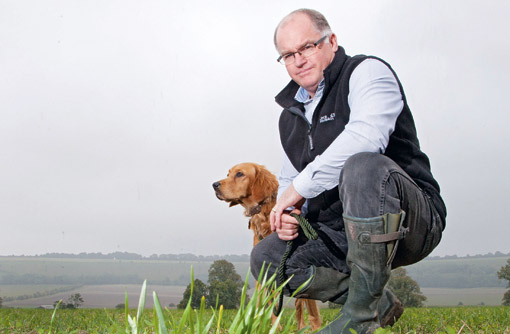 In Wiltshire, Wilton Estates farm manager Tim Goodman was able to start drilling his earliest variety on 23 August, as most of his 400ha of oilseed rape is following barley.

Before that, tramlines and straw lorry tracks were removed and a Fibrophos 12:12 fertiliser application was made, with the individual field rate determined by the results of SOYL analysis.

Next, the farm’s 5m Vaderstad Topdown was used at a depth of 15-20cm, before the seed-bed was consolidated with a set of heavy rolls. “The aim is to conserve moisture, get a good chit of weeds and create an even seed-bed,” explains Mr Goodman.

Drilling was done with a Horsch Pronto DC, although he has experimented with a subsoiler system on some heavier land this year. “But our preference has always been to establish a seed-bed and drill into it.”

Three varieties were selected: one conventional and two hybrids. “Hybrids have demonstrated their remarkable powers of recovery and justified their extra seed cost,” he comments. “But conventionals still have a place here.”

“We’ve gone back to pre-emergence weed control this year, as we don’t want to leave it all to contact activity.”
Tim Goodman

His conventional variety, Quartz, was drilled first at a seed rate of 60 seeds/sq m. “It’s an early variety, so it can be drilled in mid-August without any fears that it will get too big too quickly,” notes Mr Goodman.

The two hybrids, DK Excellium and DK ExPower, were drilled from the end of August up until 10 September at 45 seeds/sq m. All three varieties were rolled after drilling, with slug pellets applied and a pre-emergence herbicide treatment of Katamaran Turbo (dimethenamid + metazachlor + quinmerac) applied within 48 hours of drilling.

“We’ve gone back to pre-emergence weed control this year, as we don’t want to leave it all to contact activity,” remarks Mr Goodman.

“Our 60ha of Quartz has also received a follow-up treatment with the graminicide Shogun (propaquizafop).”

He describes the crop as getting its roots down and starting to fly now.

In this year’s High 5 OSR Challenge in association with Dekalb, Farmers Weekly will be following two 5t/ha growers who will be sharing their through the coming season.

As the UK’s leading oilseed rape breeder, Dekalb is helping growers secure the greatest value from their OSR whatever the conditions with its unique combination of yield-protecting traits in plant types suited to every system.

Through www.osrgrowersclub.dekalb.co.uk/, it will also be sharing the very latest technical information and best practice for all-round OSR crop improvement.