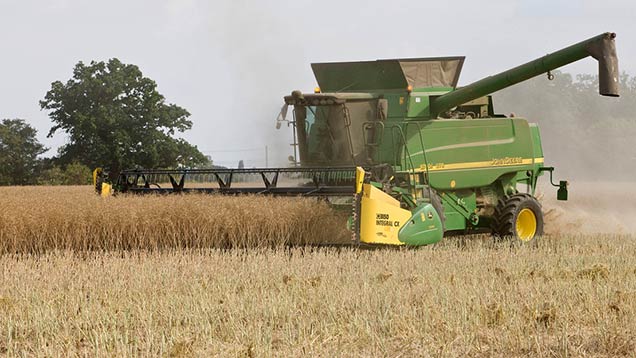 Assessing when to desiccate oilseed rape crops is critical in maximising yields and achieving effective desiccation prior to harvest.

This is especially important given that timings may differ several days between conventionals and modern hybrids grown at lower plant populations.

“Workload pressures and the overwhelming desire to get harvesting means some crops are often being sprayed at least a week before they should be,” says Hutchinson’s technical development director David Ellerton.

He explains that more than a third of the pods in well-structured, hybrid canopies may be immature at the traditional spray timing for conventional crops grown at relatively high plant populations, says Dr Ellerton.

In contrast, conventionals bear most of their yield on the main raceme.

“Therefore, for the greatest yield, oil content and sample quality, spraying should be delayed until the bulk of the pods are sufficiently ripe,” he advises.

“This can be 7-10 days later than those on the main raceme. So it’s important to apply the Roundup spray timing guidelines (see box right) to the area of your canopy bearing the lion’s share of the yield rather than the main raceme.”

“We are going in with a pod stick at the end of this week, which is at least a fortnight before the glyphosate.

“We don’t want to go too early as plants need to lose some of their waxiness to effectively get good uptake. We found stems were not properly desiccated and were sappy if sprayed too early.”

Mr Gloag is growing hybrid crops at a lower population of 45-50 plants/sq m and he explains that it results in bigger, stronger plants which take more desiccating.

To time his spray, Mr Gloag opens 20 pods from the main raceme and as soon as seed is rolling firm in the hand or turning from a green to brown colour, then he will go in with the glyphosate.

“And because we are using a pod sealant, we are confident that we can leave rape for up to 21 days [from glyphosate spraying] for harvest.”