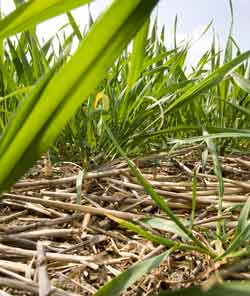 Wheat varieties which take between 125 and 130 day degrees for the development of a leaf are the most suited to the second wheat position.

That’s the conclusion from 18 years of work on the speed of development of over 300 wheat varieties, conducted by Philip Marr, northern technical development manager with Masstock.

“There’s always been clear guidance about which varieties are suitable for early drilling,” he says. “But second wheat performance has been far more mysterious, with growers largely having to go by trial and error.”

A variety’s speed of development dictates how many tillers a crop can produce before the winter sets in, he explains.

“Second wheats need to have good tillering ability. For every tiller that’s formed you get an extra fraction of root. So those varieties which have between five and seven tillers by Christmas will have the additional root mass required for the second wheat position, where take-all can be a problem.”

Varieties, such as Claire, that only produces two to three tillers by the end of December, aren’t the best choice for a second wheat, he says.

“Claire is a slow developer, requiring 160 day degrees for a leaf. It can be drilled early, from 27 August onwards, but it should be in the ground by 1 October for the best results.”

Solstice is another slow type, he points out. “It has a 145 day degree requirement. It doesn’t tiller very well, so a higher seed rate is advised.”

Most second wheats aren’t drilled until the middle of October, notes Mr Marr. “By the end of that month, the accumulation of day degrees is very slow. So the slow developing varieties, which have a higher day degree requirement, aren’t the best.”

Battalion and Einstein fit well as second wheats, with day degree requirements of 125 and 128 respectively, he says, while Zebedee is another suitable choice, at 132 day degrees.

New milling wheat Gallant also has the right profile, taking 120-125 day degrees to develop a leaf. But Grafton and Scout are in the 150-160 day degree range making them more suited to early drilling.