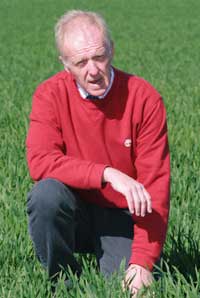 Blackgrass levels in wheat rotations could be “dire” this autumn and growers should be prepared to take every step possible to tackle the problem, says Frontier‘s Bob Mills (pictured).

This season, he suggests that using Avadex (tri-allate) will be important in blackgrass control programmes.

Frontier trials carried out last season suggest Avadex is effective as part of a programme, even without Atlantis (mesosulfuron-methyl + iodosulfuron-methly-sodium).

“We also found that adding pendimethalin (as in Stomp) to Liberator or adding DFF to Crystal also received good levels of control.”

But Mr Mills warns that the dry autumn of 2009 combined with a protracted blackgrass germination period later into the spring could have boosted the relative performance of Avadex.

“It [Avadex] will certainly be important, but maybe not an answer to all your prayers.”

The trials found that when applications of Atlantis were delayed until the spring performance was “significantly impaired”. Therefore, Mr Mills advises autumn use of Atlantis.

He also encourages growers to stick with delayed drilling to ensure a stale seedbed, use the best products at full dose rates and test for resistance.

BASF agronomy manager Stewart Woodhead notes that both NIAB TAG and BASF’s own trials show similar results to those of Frontier’s.

“The combination of the tri-allate [in Avadex], Crystal and diflufenican achieved over 90% mean control in five independent trials average 306 blackgrass heads/sq m.

“The combination of these actives makes sense because they offer four different and complementary modes of action.


• Find more advice on grassweeds in our Autumn Arable Masterclass