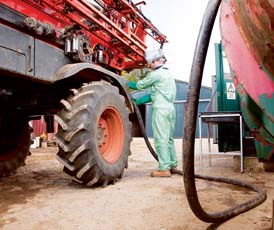 “Just because you can’t see any disease on new growth, doesn’t mean it’s not there,” points out UAP technical director, Chris Bean. High over-winter septoria levels are sitting on leaves five and six in the bottom of the crop, although new leaves are clean and growing well.

Rust levels are variable and the disease is generally under control, but starting to appear in late-drilled wheats that didn’t get a T0. “There is disease there, so we’re advising a cautious approach. Shaving £5-6/ha off the cost of a good T1 simply isn’t a risk worth taking.”

Hutchinsons’ technical manager, Dick Neale, says there’s a good chance it will turn wet before the end of the month. “Don’t put on silly low rates – you’ll be chasing your tail till the end of the season.”

Growers will need a T1 that ensures robust rust control – “particularly important with these extremely aggressive races of yellow rust.” Mildew has been a particular problem through the Fens, so growers there may need a specific treatment.

NIAB TAG‘s Ben Freer says growers with high-risk crops in the south and south west will have sprayed a T0, leaving fairly low levels of yellow rust, with septoria “puttering around”.

With septoria the main target in the south west, he opts for an epoxiconazole-based T1. “I wouldn’t contemplate a T1 without Bravo (chlorothalonil) in the mix. Some might advocate a strobilurin, but I don’t follow that line.”

Across north Wiltshire, Oxfordshire and Gloucestershire, Masstock‘s Tim Horton hasn’t seen any yellow rust. Nor has septoria climbed onto new growth, but there has been mildew on Solstice and Gallant.

He favours a “robust and reliable” T1, based on prothioconazole, with spiroxamine if needed for mildew. “I’d also put a protectant in. Folpet is the new one that has good activity on rust, but isn’t antagonistic with prothioconazole. You see that sometimes with chlorothalonil.”

In Suffolk some Oakley and Robigus growers went in early to control yellow rust and have even topped up with triazole since to extend persistence, says Prime Agriculture’s Marion Self. “Although it’s dry, and I’m hardly seeing any rust now, you can tell it’s brewing up.”

Her “broad-brush” approach to T1, ideally timed three weeks after the T0, will be epoxiconazole-based, with the addition of boscalid (as in Tracker) if needed for eyespot. Chlorothalonil will boost septoria control. “I’ll add a little strobilurin to rusty varieties – just 0.5l/ha of pyraclostrobin.”

The T0 spray is still being applied in Yorkshire, reports Arable Alliance’s David Martindale. “There is a lot of septoria in the base of the crop, waiting to splash up onto new growth. There’s yellow rust appearing in untreated Oakley. The T0 will dampen this down, but it’ll be bubbling away in the background.”

He too will be aiming for an epoxiconazole base, with chlorothalonil to boost septoria control. “If the rust situation cranks up we’ll add a strobilurin.”

Epoxiconazole or prothioconazole base popular