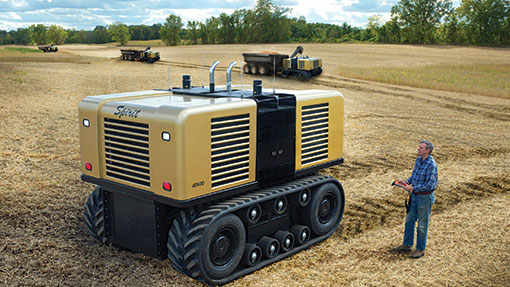 From those early days of yield mapping and soil sampling in the 1990s to today’s millimetre-accurate guidance systems, there’s no denying precision agriculture has come a long way.

This efficiency drive will intensify as farmers meet the challenge of feeding a growing and more demanding population from finite resources in a price-competitive market.

In the near future, the emphasis will be on improving data management to and from the array of systems on the market. From yield mapping and soil analysis, to variable rate applications and satellite positioning, farmers already have access to a vast amount of information.

As wireless technology develops, so will the ways in which data is used to improve productivity of machines, inputs (including fuel) and labour, says John Deere’s integrated solutions implementation manager Georg Larscheid.

He believes the mainstream adoption of telematics on self-propelled vehicles will enable “seamless and instantaneous” data transfer to and from in-field vehicles and will lead to other developments, beyond site-specific applications.

In particular, web portals that dial into telematics data allow farm and fleet managers to access live information remotely from different sources (such as phone, tablet, laptop or PC) and, with their permission, also let them share it with others, such as consultants or machinery dealers.

“Realistically, road restrictions and field sizes [especially in the UK] mean we’re probably limited in how much bigger machines can go, so the future is going to be more about increasing in-field productivity and making machines work at their optimum.”

Tractor-implement management, including the automation of an integrated tractor/implement combination, is another future growth area, adds Mr Larscheid. “Implements will control tractor functions such as steering, forward speed, hydraulic functions and pto on/off as well as speed, for instance.”

The future of precision farming

What about guidance systems?

The near future is likely to see more machinery using RTK-based guidance, although mobile RTK uptake may be hindered in remote areas with an unreliable signal, notes Mr Larscheid.

Interest in the system, which confines wheelings to permanent lanes, is increasing and he is confident of “significant uptake” over the next five years as farmers look to reduce input and operation costs and learn from CTF pioneers.

CTF can be in a range of widths depending on circumstances and machinery. “Currently 12m is the maximum width, which can reduce tracked areas in the field to less than 15%.”

Mr Chamen says machinery manufacturers are more aware of the growing demand for equipment compatible with CTF systems and he is confident the availability of appropriate-width machines will improve. “Getting harvesting machinery that’s the right width is still an issue, but that will change.”

A future development within CTF is wide-span vehicle systems, where machines have a much wider track gauge than the standard 1.8m, he adds. Such a machine is being developed for onion crops in Denmark, with a 10m track gauge. It can travel laterally in the field or lengthways for road transport and can cut tracked areas to just 7%.

Telematics on vehicles combined with web-based data transfer will drive wider uptake of site-specific field data, such as yield maps, soil maps and variable rate/ prescription maps, says Mr Larscheid. Farmers will potentially have a “network” of experts (such as consultants and agronomists) that can access and use the data, providing improved recommendations.

Variable-rate technology on implements (fertiliser spreaders, sprayers and so on) is almost “standard” on higher-spec models, so many growers are already geared up to make more of such data, he says.

What about driverless tractors?

Fendt has developed a form of driverless tractor in its GuideConnect system, whereby two tractors are connected via GPS-RTK satellite navigation and radio. The manned master tractor leads a second driverless tractor, which can either follow directly behind with a different implement or be offset to do the same task.

The one driver has access to instrumentation from both machines and can stop, or temporarily change direction of the “slave” tractor if necessary (to avoid obstacles). Failsafe systems are built in to ensure only the two designated tractors “talk” to each other if neighbouring systems are working and the slave machine will stop in event of signal loss or breakdown.

The system is in commercial field tests and is initially suited to vegetable row crop work that involves slow speeds, consistent soil and large, flat fields. It allows larger working widths to be achieved while avoiding issues around transporting larger equipment on roads.

“GuideConnect is a giant leap forward on the journey towards fully autonomous machines,” says RASE chief executive David Gardner. The concept could easily develop with the addition of radar to detect obstacles and eventually one man could control multiple machines.

The next evolution is to fully autonomous tractors with no cab or driver, he says.

What about robot tractors?

The farmer initially “trains” the unit where to go (and where not to) by driving around the field to map boundaries and obstacles, but once this data is stored the unit operates independently using four failsafe controllers – two for collision avoidance and one for positioning and mapping.

A remote station, up to 25 miles away, can handle multiple tractors and provides high-resolution video and audio. A small hand-held unit also allows for local operation, explains Terry Anderson, ATC’s vice-president of design.

Using radio-based navigation rather than GPS-RTK means there is less initial capital outlay and no annual fees, he says. Because it is powered by a diesel-electric unit, there are also no transmissions or differentials to go wrong and it offers fuel savings over traditional diesel engines.

The technology is being tested on commercial farms and costs around $500/hp or $200,000 (£123,000) in total. Currently it is used only with ATC attachments, but ATC is working with manufacturers to develop compatible implements to use the system.

ATC also says the chassis can be modified for different functions, such as grain transporters, mowers, planters or haulers.

While driverless tractors may have some applications on farm, precision farming expert and head of engineering at Harper Adams University Simon Blackmore believes the future lies in “smaller and smarter” autonomous robots.

Using lightweight machines instead of large tractors overcomes many issues with soil compaction or the weather and reduces energy use massively, especially where precision input application is used, he says. “Becoming more efficient doesn’t just mean taking the driver off the tractor.”

Prof Blackmore says several different projects are under way to turn robot scout concepts into commercial machines. “There are no technological reasons why we don’t have agricultural robots now. The main challenge is attracting the private investment.

Yield mapping is not a new concept for cereal growers and it’s a growing feature of many combines rolling up and down the countryside at harvest time.

However, it’s now gathering momentum in root and other vegetable crops as producers’ aim for crop uniformity and the optimisation of inputs, with one grower taking precision farming to potatoes. Jim Wilson, potato grower and managing director at precision farming specialist Soilessentials first fitted load cells to his potato harvester in 1997 and has been mapping his potato yields ever since.

On a trip to the USA Mr Wilson discovered a more sophisticated system and began importing the technology.Three years ago, in response to growing interest, he developed the Soilessentials RootYield system, which is now sold around the world. Retrofitted to most harvesters, it works with two load cells supporting a conveyor, which on a potato harvester is the picking table.

Systems sold to other root and vegetable crop growers yield map onions, artichokes, bulbs and, most recently, spinach.“The cells monitor conveyor speed and weight of crop travelling over it, while a GPS system logs the machine speed and position,” says Mr Wilson.

A tilt sensor also accounts for any changes in slope and all the information is combined to create yield maps that Mr Wilson says can be within 1-2% accuracy.

Growers are using the maps to monitor the variability of crops to target nutrient applications and compare treatments to further optimise inputs to increase saleable yield.

“In such high value crops with considerable growing costs it’s important to understand variability within the crop and manage it accordingly throughout the season,” says Mr Wilson.