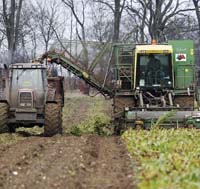 Sugar-beet growers should scrutinise their planned crop areas this spring to make sure they do not end up subsidising British Sugar, the NFU has urged.


Speaking at a meeting of some 150 growers in Peterborough on Monday (19 January), NFU sugar chairman William Martin reminded attendees they would only receive the full £26/t price for their 2009/10 contracted tonnage and anything over that (“C beet”) would be paid at a much lower price. That was in contrast to the current campaign, where all beet delivered received the 2008 price.

“British Sugar says [the price for C beet] will be £20/t, but when you take off transport and other costs, it will probably be nearer £12/t. I don’t think anyone should be growing beet for that, so think carefully before you sow acres that you might only get £12/t for. It’s not our job to provide sugar beet to British Sugar at below cost.”

He urged growers who thought they may exceed their contracted tonnage to contact their area manager and request more quota. “British Sugar is very bullish about the future and says they want more beet grown in the UK. How they achieve that is very simple: Pay up,” he said.

Looking ahead to 2010 price negotiations, Mr Martin said no figures had been discussed yet, but he said both the NFU and BS had learned lessons from last summer’s last minute negotiations and both parties were ready to start talking. “We need a package that makes sugar beet growing profitable for growers. We don’t want BS to put growers into a position where they feel they need to send their contracts to us [as some did last year], but if they do, we won’t rule out doing the same again.”

Transport allowances that reflected the true cost of haulage – including cleaning and loading – were a key part of the overall price “package”, Mr Martin said. “The best answer would be for BS to pay more to haul beet, but they’re reluctant to do that. They appear to believe we are hauling beet inefficiently.”

He suggested that the introduction of an ex-farm beet price could take the onus off growers to arrange and pay for haulage, but acknowledged many were worried how it would work in practice.

Cambridgeshire farmer John Young was one of those. He delivers around 4000t of beet into the Wissington factory every year. “We’re over 40 miles from the factory and with 11% tares, we’re losing nearly £2/t on haulage (the difference between BS allowance and the cost of haulage). That’s over 10% of profit from this crop and we’re not prepared to do that any more.”

An ex-farm price would mean that BS would have to pay for the haulage, but he was concerned that he would lose the good relationship that had been built up with his existing haulier. “We know them and trust them to do a good job. Any ex-farm system would have to let us still use our own haulier.”