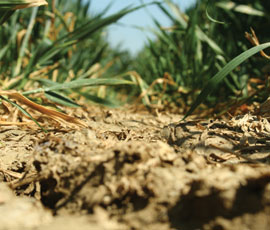 “The figure equals the previous low, recorded in 1912, and follows the driest March ever recorded,” a Met Office spokesman said.

Other areas have also recorded extremely low precipitation. East Anglia, at 3.3mm, has had the second driest April since 1910, slightly higher than the record low in 2007. And England’s north-east, at 9mm, was close to the record low of 6mm recorded in 1912, the Met Office said.

Wales, too, saw far less rain than normal in the first half of the month. The 23.9mm of rain that fell represented 28% of rain usually recorded for the month.

Only Scotland could see above average rain figures by the end of April, with 81% (69.8mm) of the normal precipitation for the month falling in the first two weeks of April.

However, drier conditions will push further north and into Scotland in the coming weeks, the Met Office forecast showed.

“There is little rain in the forecast,” the Met Office spokesman added. “What rain there is will fall mainly on the south, but it looks likely to be showers and localised. Some areas of the south could continue to miss out.”

In May, temperatures should range from average for many eastern and north-eastern areas of England, to slightly above average towards the West Country.

Rainfall amounts look to be closer to average at most for many northern areas, but there is the potential for parts of central, southern and eastern England to see more rainfall compared with recent weeks – albeit interspersed with some lengthy drier spells, according to the forecast.

“Despite some showers in places, sunshine amounts will be around or above average for many,” the spokesman said.

The dry theme to the weather has been largely caused by blocked weather patterns across the UK. This weather pattern has prevented the usual run of westerly winds off the Atlantic Ocean, which bring rain-bearing fronts.