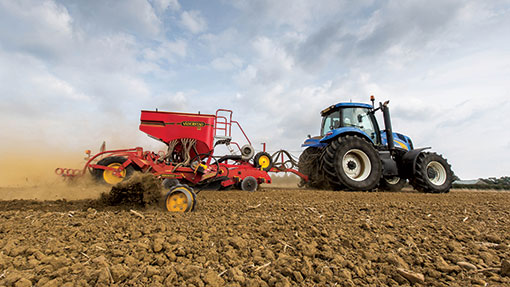 This season’s UK winter wheat area is set to rival the 1.96m hectare crop established in 2013, and drilling is estimated to be about 80% complete.

Drills have been out in force across the UK since early September, encouraged by fine weather at the time.

Despite feed wheat prices hovering just above £100/t, farmers have not turned their back on winter wheat after a 16.6m tonne crop this harvest – one of the largest on record.

David Neale of Agrii says growers exploited good weather and the only areas left to drill are fields after root crops and maize or where growers are facing agronomic challenges.

“Winter wheat drilling has gone really well and I think anyone who has not finished drilling has just been waiting for that bit of moisture or to tackle bad blackgrass.”

The fine weather has prompted some growers into drilling too early, according to Hutchinsons agronomist Dick Neale, who believes there could be a blackgrass storm on the horizon.

“There is an awful lot of wheat that should not be in the ground, where people have jumped the gun.

“I think we could be looking at some fairly horrendous situations in the next couple of weeks,” he says.

He estimates drilling progress is 20% ahead of last year, which saw many growers sow in November after being held back by stormy weather in October.

The typically later regions in the north of the country have enjoyed one of their earliest drilling seasons in recent years, according to Agrovista technical manager Chris Martin.

“It has been one the best autumns we have had in a long time, with crops going into near perfect conditions. People were drilled up in September, which is unheard of.”

However, he predicts the early drilling could open growers up to more problems such as blackgrass and barley yellow dwarf virus (BYDV).

He also points out growers who have gone early on land with blackgrass had a limited opportunity to achieve a stale seed-bed and may not have achieved the best result with pre-emergence herbicides during a dry September.

“For those that were patient, the chemistry would have been more effective because we had near perfect conditions in early October.”

In the central regions of the UK, independent agronomist Luke Cotton says where blackgrass isn’t an issue growers have flown through their drilling, but on the heavier land in Buckinghamshire, growers have held back.

“We have got everything, from people who have done none of their cereal drilling, to growers who are 70-80% through,” he adds.

Meanwhile, Mr Neale estimates nearly all of the winter barley crop will be sown, with growers having a degree of confidence it can compete with the blackgrass, even when sown earlier.