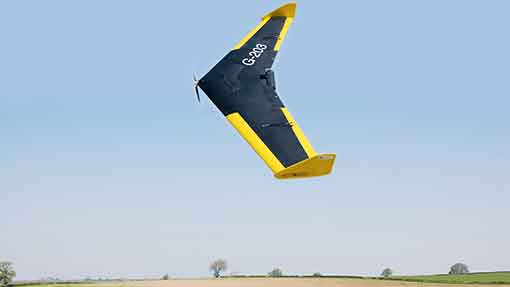 A new approach to precision agriculture is taking place in the skies above our farmland, opening up possibilities that were previously only dreamt about.

It’s all because the ability to capture high-resolution data by remote sensing, from both airborne and satellite platforms, is allowing the experts to improve our understanding of plant health and crop growth, to drive better performance and results from the field.

It is based on the premise that the spectral signature of a plant holds a wealth of information about its growing state – much of which can’t be detected by the human eye. For that reason, traditional aerial photography, which works in the red, blue and green wavelengths that we can see, is complemented by data from sensors which allow the inspection of wavelengths beyond the visible spectrum.

To put it another way, it enables the examination of near infrared and other wavelengths, which are closely related to the production of chlorophyll by plants and other growth activities. Once this data is analysed and interpreted, it can then be used to refine crop treatments and input timings, or plan field operations.

For such detailed crop examination, there is a requirement for drones, otherwise referred to as unmanned aerial vehicles (UAVs), fitted with the appropriate sensors, to fly above the area being surveyed. They take just 30min to collect the data required from 150ha, with the results being added to other images from satellites and aircraft, before their interpretation is sent back to the farm, usually within 24 to 48 hours.

Arriving in a format which is compatible with existing farm equipment and software, the resulting information can then be put to good use. That may be anything from producing a weed treatment map for a problem area, to a yield prediction model or a harvesting guide based on expected crop maturity.

It all began as a two-year R&D programme to explore the potential for advanced remote sensing in agriculture and horticulture, and has only recently become a commercial service, explains Mark Jarman, operations manager with URSULA Agriculture, who adds that it is providing the timely, accurate and detailed information that farmers and growers increasingly need to make decisions.

“We’ve reached the stage where remote sensing can be used to really help us to understand what’s going on in the crop,” he says. “It’s a step further on from relying on satellite images to show any in-field variation – although this can still be an important insight for many growers.”

The idea is to combine targeted and timely image capture with its analysis, so leading to new capabilities, he continues. “It’s important to understand that we don’t give agronomy advice. We are providing farms with the tools to help them interpret what is going on.”

Recent examples which go beyond farm maps and treatment plans include the development of a yield prediction model for brussels sprouts and crop cover monitoring for a potato growing group, he reveals.

“There’s a link between crop height and final yield with brussels sprouts,” explains Mr Jarman. “So by being able to measure the crop at planting, and again mid-season, we can get an accurate prediction of yield.”

Likewise, monitoring potato crop cover at key stages of the growing season can be used to understand yield variation and pinpoint the most effective farming practices, he adds.

Looking ahead, Mr Jarman reveals that researchers at URSULA Agriculture are working on being able to detect the outbreak of specific diseases in crops. “On a large farm, that could be useful in prioritising spray programmes or directing the agronomist to certain fields, for example.”

Similarly, blackgrass monitoring and mapping, which is currently done from late spring onwards, could be carried out before Christmas and linked to the effectiveness of pre-emergence herbicide programmes, he notes.

Longer term, he also sees more automation of machinery and greater precision coming to the market, as well as the measurement of factors which affect crop quality. “It’s an exciting time to be involved in this technology. There’s lots of capability and capacity.”

Mr Jarman accepts that there will be more service providers in the future and that growers will have their own unmanned aerial systems on farm. “But that’s not appropriate just yet. The system is still in its infancy.”

Not surprisingly, the weather forecast plays a role. The drones fly at 1,000ft, underneath most types of cloud cover, but resolution is important to the end results. If it’s wet and very windy, the activity has to be postponed.

“Another possibility is whether we could operate part of the service by radar. That would solve the issue of clouds getting in the way.”

In Denmark, the ASETA project is aiming to reduce herbicide use by using drones to identify the presence of weeds in crops.

Led by Andres La Cour-Harbo of Aalborg University, the project uses cameras attached to a drone to survey fields and spot the weeds, from their tiny colour variations or “reflective signature”.

The weed’s co-ordinates are logged, before becoming part of other information held about the field on the farm’s computer. In due course, the sprayer can then be used to treat the densest patches, rather than applying herbicide to the whole field.

And a tie-up between Harper Adams University and the leading agricultural university in China will focus on developments in precision agriculture.

Specifically, researchers will work together on ground-based robots and unmanned aerial vehicles, developing the protocols and controls required to operate a mixed fleet of devices, capable of performing a wide range of farming tasks.

Precision farming has been part of the routine at Thurlow Estate Farms, on the Cambridgeshire/Suffolk/Essex border, for six years – with greater significance in the last two years.

Farms director Andrew Crossley says that the technology has allowed the 5,184ha estate to improve its attention to detail, despite the large scale of the farming operation.

He can also see further opportunities developing, having had a glimpse of what remote sensing can offer and how it could be used to help with decision making and agronomy planning.

“There are often three levels of interpretation going on within an arable business – the manager, the agronomist and the operator,” he explains. “Unless the communication and understanding between them is spot on, there’s always a chance that something might slip.”

That chance has largely been eliminated now, he notes. “A big operation can farm just as well as a smaller one, thanks to precision farming technology and its application.”

His starting point was investment in highly accurate tractor guidance, which he did in conjunction with four other local growers by setting up RTK Farming. They established a Real Time Kinematic (RTK) network of fixed base stations and repeaters, using a radio-based signal, so that a correction signal could be applied to satellite orbits that are constantly changing.

At Thurlow, guidance was then extended to the other machinery used, so that all the equipment follows the same system. As a result, the farm is now able to apply both fertiliser and sprays according to where they are most needed, with a huge reduction in overlaps, and vary seed rates to suit different soil types.

“The estate has been mapped by soil zone, with each zone tested for its P and K indices,” says Mr Crossley. “These nutrients are now applied to where they are required, rather than by blanket treatment.”

The saving in nutrient and liming costs has been considerable, he reports. “We’ve about halved our annual expenditure on P and K inputs, so there’s been an immediate financial benefit, as well as an environmental one.”

Similarly, nitrogen and spray applications have been targeted, so that they’re being used more effectively. “The total nitrogen and fertiliser bill has fallen by up to 5%. Much of this has come from reducing overlaps to a minimum.”

At the same time, the farm also switched to liquid fertiliser. “It’s not possible to maximise the spread of fertiliser to the edge of the crop without being on liquids.”

The potential for remote sensing is of interest to Mr Crossley, after a trial with some maps taken from an aircraft showed him some advantages of having more detailed and timely information.

“They were able to use filters to make the problem blackgrass areas really stand out on the images. On this farm, we would use that information to raise the wheat seed rates in those patches, and get more competition from the crop.”

Ideally, he would like the images to arrive earlier on in the growing season, so that he can take any corrective action in the same year. “At the moment, the information is only relevant if that field is going into a second cereal.”

He can see the time coming when it would make sense for farmers to invest in drones and similar technology. “Just as we did with the guidance system, it could be an opportunity for a group of like-minded growers to spread the cost and benefit from the expertise.”