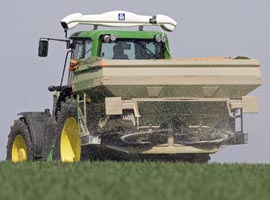 Dry weather in March could have led to poorer usage of urea nitrogen in wheat crops, compared with ammonium nitrogen, than in previous seasons, according to Yara trials.

The firm is conducting – for a third consecutive year – a trial in wheat comparing different sources of nitrogen, explains Mark Tucker, Yara’s head of agronomy.

“This year, the results show urea plots having 9% less nitrogen in the leaf compared with ammonium nitrate, reflecting the impact of the extremely dry spring.”

Urea needs moisture in the soil to be converted into a usable form of nitrogen, he explains. “If it stays dry then urea is lost in the form of ammonium gas.”

The easiest way to determine whether wheat crops are short of nitrogen is to send about 30 youngest, fully-expanded leaves for tissue analysis. “You’re looking for 4-4.5% nitrogen in the leaf.”

Any less, and growers should consider using a foliar nutrition product, such as YaraVita Croplift, to give a short-term boost to stressed crops, he says. It contains a small amount of nitrogen, as well as some trace elements, which can help alleviate transient stresses.

Growers should also review any remaining nitrogen applications, where crops are in good soils and reasonable health, to counter any nitrogen losses from previous urea applications, he adds. “You might need to add 10% to replace what has been lost.”